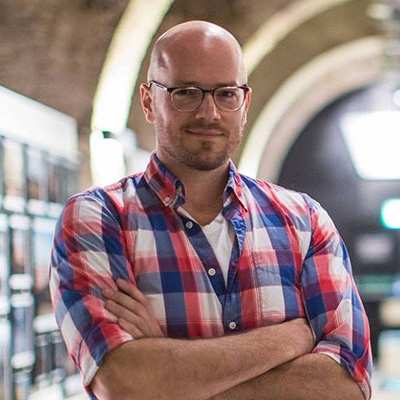 After graduating from USW in 2001, having studied BA (Hons) Theatre & Drama, which is now held at Cardiff Campus, Ben Morse has seen an incredible career spanning 15 years culminating in his first major film release at the end of 2016.

His 90-minute film ‘Get Better’ – a portrait of global singer and songwriter success Frank Turner – shows the incredible journey of life on the road while on tour, in a brutally honest and open insight into the artist and his band’s lifestyle.

Ben has worked over a decade with Turner and his band and, with a great deal of various work in between, he tells of his ups and downs in a film-maker’s career, giving crucial advice for those looking to follow in his footsteps.

The new documentary will be in UK cinemas for one night only on 13 December, with a screening and Live Q&A with Turner taking place in London’s Leicester Square. Living in South Wales? You can see ‘Get Better’ screened at Cineworld, Cardiff.

Read on for an in-depth Q&A and a brilliant insight into the career of a USW graduate and film director.

Tell us about yourself…

I grew up in a village outside Salisbury. I used to tape any movie I could find on TV, foreign film, action movies, documentaries, anything that sounded like a good story. I used to skip Games lessons at school and go and hide in my local cinema, dreaming of making films one day.

What did you study at USW?

Theatre & Drama with Psychology. I find people fascinating. I specialised my psychology modules in interpersonal studies. That informs drama totally, as drama is usually about human interaction.

How did it gear you up for your future career?

Perfectly. I was a teacher for many years, and my psychology knowledge gave me a broad base for how to manipulate children into thinking I was a good teacher. It helps you run a set, too. Theatre & Drama gave me a broad cultural base in theatre, film, television and radio that I still use today.

What’s your favourite memory from your time at USW?

Directing my first play and realising that the buzz I got from that was something I wanted to keep chasing. It was Duck Variations by David Mamet. I seem to recall getting my beleaguered set designer to source 5000 rubber ducks for the production.

How did you get into film-making and where did you start?

I approached bands over MySpace offering to put together a music video with the friends from my course if they could spare us a day. Eventually someone did. The video was terrible, but it led to more, less terrible and eventually quite good ones. And then a film.

What sort of projects have you worked on in your career?

I did some work on TV and film sets right after university, much of it in South Wales. I then ran a theatre department for eight years. As a director, I've shot music videos here and in the US. I'm mostly known for my work with Frank Turner, for whom I started out, and have become a go-to for tour photography, promo images, music videos, lifts to obscure parts of the country and a source of comedy.

How has the film industry changed since you graduated in 2001?

What have been the biggest highlights throughout your career?

Flying to Chicago to work with ex-WWE and MMA fighter CM Punk, who is something of a hero to me. Flying to Nashville to watch my boys recording with Butch Walker, who is also a hero to me. Travelling the world with friends. Oh, and standing on the side of a hill in South Wales, at 3AM, eating chilli with Christopher Walken in a rabbit costume. Yeah.

What have been the biggest challenges throughout your career?

Patience. Balance. Personal stuff. Finding people to give you chances is tricky, and takes time. Then not letting them down, and repeating the process at the next level with the same (or more) effort requires a lot of determination. Other than that, balancing income with art. I went full time freelance nearly three years ago. Both approaches have positives and negatives. But the bottom line is that if you're going to try to work creatively for a living, you need to be determined, have discipline and be self-reliant.

Tell us about ‘Get Better’ – what’s it all about and where did the idea to make it come from?

I was making the film, which was pitched as a year-long study of a band that didn't stop - and to throw back to my degree, the human reasons for that struck me as interesting. “Why are you never home?” “What does that look like in your mid-thirties when it isn't a wild ride anymore, it's a career?” “How do you market yourself as an everyman, yet play to 10,000 people a-night?” “What do you hold back?” “Where's the line?” That's what the film is about.

In that year, Frank had a rough time. He went through some personal changes. The working title for the movie was "I Am Disappeared" - another Frank Turner song, but also speaking to ideas of self-identity and creation. In the end, Get Better is about personal improvement.

What has life been like on the road with Frank Turner and the crew?

They're family to me. Every single one of them has shown me unfaltering generosity, both artistically and personally. I've spent much of this year locked away in edit suites, and I genuinely miss being on the road with them.

How are you promoting your film in the run-up and on the day and where can we find out more about it?

Frank is out on the road and talking about the film. He's the face of it, so that makes sense. It's also brave, because that movie is tough on him in places. I think letting me make it the way I wanted to make it is an astonishing act of generosity.

Where can we watch it?

We're adding screens every day - but it's in 40-50 cinemas, for one night only, on December 13th. Frank and I are doing a Q&A beforehand, and he's playing some acoustic songs, and then the film will roll - all of that is streamed into every cinema.

Will it be available to buy after the premiere?

At some point. DVD roll-outs and on-demand roll-outs are being talked about. There's lots of very dull rules about territories, exclusivity windows and so on, but at some point in 2017, yes.

Finally, what one piece of advice would you give to an aspiring film-making student today?

Film is a language. It's nuanced, textural, structural aesthetic and its inflections carry meaning. If I asked you to speak Mandarin, right now, with no knowledge of it, you might well embarrass yourself. Plus, what would you actually say? The best thing a film student can do is choose something they want to say first, then practice how to say it. Rushing to buy a fancy camera is like buying the flight to China before you can speak a word of the language.