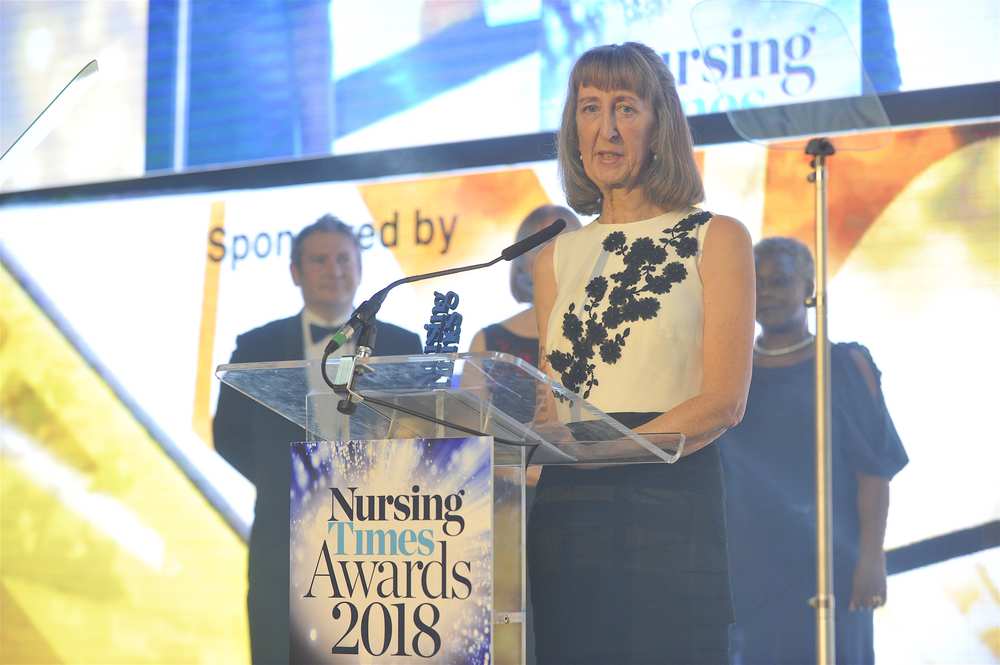 Professor Ruth Northway gives her thanks after receiving the award

Ruth Northway, Professor of Learning Disability Nursing at USW, has been honoured with the Chief Nursing Officers’ Award for Lifetime Achievement.

The accolade was presented to Prof Northway at the Nursing Times Awards earlier this week, which were held at the Grosvenor House Hotel in London.

During the ceremony there were also honours for nurses working with people of all ages, and who are facing many challenges with their physical and mental health.

On receiving the award, Prof Northway paid tribute to the people she has worked with during her career.

“I have to confess to a feeling a little uneasy that I, as an individual, have won this award,” she said.

“As nurses we seldom achieve things alone – without colleagues, teachers, mentors, patients, carers, families and a wide range of others we would not be able to do what we do, nor achieve what we achieve.

“I want, therefore, to thank all those I have had, and have, the privilege of working with and alongside as without your support and encouragement I would not be able to do what I do.”

There was also some advice for anyone considering following in her footsteps.

“My major feeling on receiving this award is, however, one of feeling so proud to be a learning disability nurse and very grateful to have had so many fantastic opportunities and experiences in my career to date,” Prof Northway said.

“When I was interviewed for nursing it was just after the Jay Report had been published. For those of you who are unaware of that report, its remit was to review what we now refer to as learning disability nursing and its recommendation was that this field of nursing should be discontinued. I was therefore advised at interview that I would start my course as a learning disability nursing student but that I might qualify as a social worker.

“Had you told my 18-year-old self then that 39 years later I would be stood here receiving this award as a Professor of Learning Disability Nursing, I most certainly would not have believed you. So, whatever stage of your career you are in I would say look for and take opportunities – you never know where you career will take you.”

Editor of Nursing Times, Steve Ford, said: “Congratulations to all our deserving Nursing Times Awards winners for 2018. The evening always fills me with a really positive feeling, despite the challenges that may be facing the wider health sector.

“As ever, our awards entrants set a very high bar and demonstrated what great care and innovation can be achieved by nurses, often with few resources other than a really good idea and the determination to see it through.

“The expert panels that I spoke to during the judging process in September consistently told me about the high quality and inspirational nature of the entries they were given.”