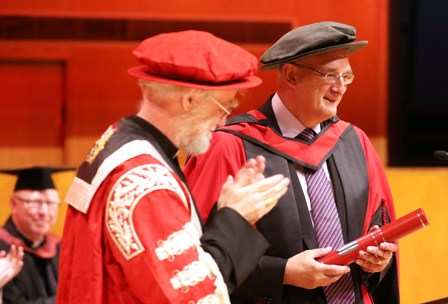 The University’s Chancellor, Rowan Williams, presided over the first of the USW ceremonies, where students from Diploma to PhD level wore new graduation gowns and mortarboards in the University colours of red and grey.

Professor Sir Leszek Borysiewicz, pictured, Vice-Chancellor of the University of Cambridge, and Martin Turner, ACCA President, both received Honorary awards from the University during yesterday’s ceremonies.

On receiving an Honorary Doctorate of Science, Prof Sir Borysiewicz said: “Universities are unique institutions that play a formative role, not only for students, but throughout society. I am delighted to have received this Honorary award from the University of South Wales, and to be associated with an institution that is committed to becoming known for learning that is fed by world class research.”

On becoming an Honorary Fellow of the University, Martin Turner added: “I have no doubt that those who have graduated from the University of South Wales will go on to succeed in whatever endeavours they choose. I am proud to have received an Honorary Doctorate of the University and look forward to working closely with its Faculty of Business and Society in the future.”

Graduation continues this week, where the following distinguished individuals will become Honorary Fellows:

Michael Lawley – Chairman of Cooke & Arkwright, Governor of the University 2001-2013