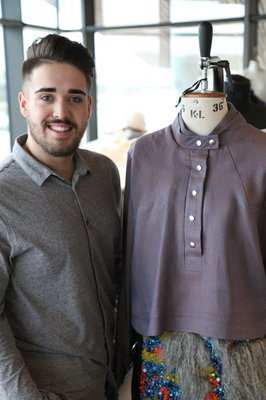 A FASHION student from Port Talbot has shown he’s full of eastern promise by winning an international competition.

Steffan Pearson, 20 - who’s studying fashion design at the University of South Wales (USW) Newport City Campus – took one of the top £2,500 prizes in the China International Fashion Design Competition 2016, working on the ‘Design in Britain × Made in China’ project.

Steffan’s creations – a six-piece menswear collection based on west African textiles, mixed with relaxed and comfortable shapes - will now be produced and sold in the Far East market.

USW graduate Rebecca Hill was also one of the winners, while current students Ashley Muza, 22, and Sophie Higgins, 20, were highly commended by the international judges.

“The success in the competition is great for Steffan and Rebecca and for all the other USW Fashion students who were involved,” said Irene Dee, BA (Hons) Fashion Design Course Leader.

“The company is now producing a marketing film that will feature ‘Designed in Britain × Made in China’, which will also highlight the work of USW and the GXG designer brand.

“Working with live industry projects is an invaluable opportunity for the students to consolidate their skills, established on the course, and to apply them straight to industry-based projects.

“Our students gain a vital insight into balancing their creativity with real commercial awareness, achieving industry recognition and success ready for employment opportunities.

“We are so proud of the high standards of work produced by our students and that it is recognised by an international fashion industry.”