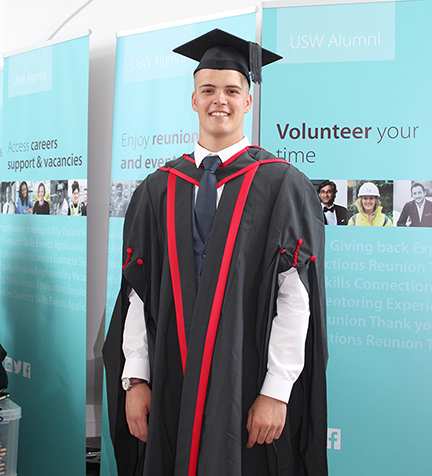 Film Studies Graduate Daniel Jones got in touch with the Alumni Office to tell us he is off to Japan after graduation to work with All Japan Pro Wrestling for 3 months.

We caught up with Daniel or ‘Dragon heart’ - his professional wrestler name, to find out more:

I am the current and reigning All Wales Pro Wrestling Champion (2 times), I am currently the one half of Knights of Chaos Tag Team Champions and I am a two time ATTACK! 24/7 champion.

How long have you been Wrestling?

I started training to become a professional wrestler when I was 15, so around 6 years ago. I had my first match in October 2012 and have been wrestling around the U.K. and Europe since having wrestled in Wales, England, Scotland, Belgium, Germany and Malta.

What achievements can you tell us about so far?

I am the current and reigning All Wales Pro Wrestling Champion (2 times), I am currently the one half of Knights of Chaos Tag Team Champions and I am a two time ATTACK! 24/7 champion.

Forgive my ignorance but is training in Japan really special?

Training in Japan is incredibly special and a big goal of many wrestlers in the world. It is extremely intense and takes a lot of discipline. Despite how challenging it will be, it's without a doubt a once in a lifetime opportunity!

Are you planning on building a film career using your wrestling in some way?

My course has been very useful and I will use what I have learnt constantly as I make music videos of matches, promo videos and video diaries.

Is wrestling your main goal? What are your ambitions?

Wrestling is my main goal and has been since I was a little kid. The main end goal is to make it to the WWE one day, but I'm looking forward to enjoying my time before that and learning the craft around the world as much as I can first.

Daniel also commented, ‘Although wrestling occupies most of my time at the moment I am very aware that getting a good education is important. Having achieved a 2:1 in Film Studies I know I can follow that path in the future.’