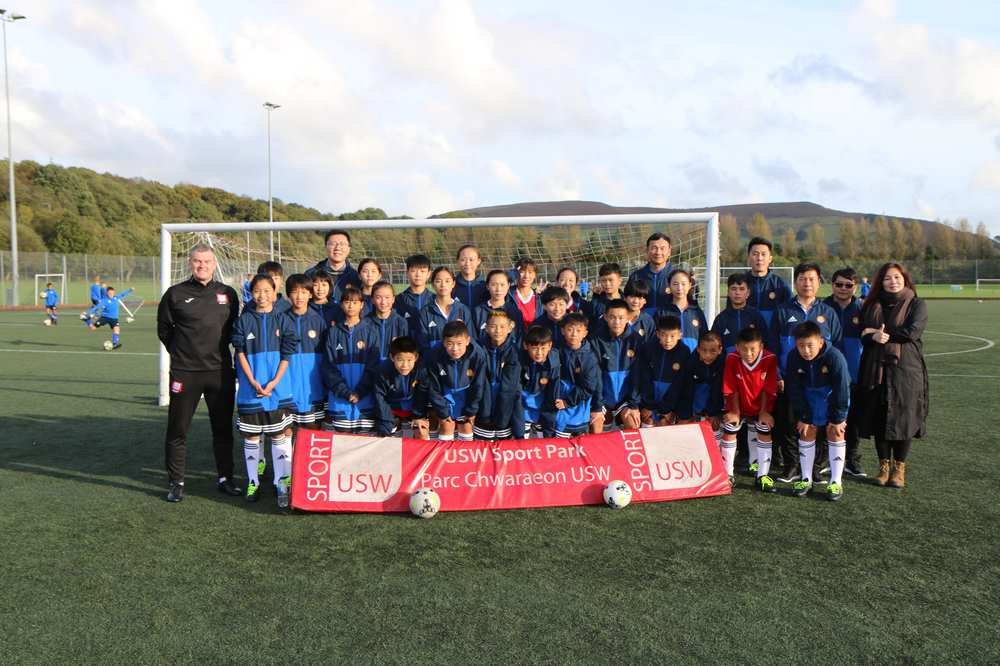 Young footballers from China have tested their on-field skills during a visit to South Wales.

The group of 28 students, support staff and media team were on an eight-day trip hosted by the University of South Wales (USW) and the FAW Trust, to learn more about how football and football players are being developed in the UK.

Organised by the British Council and the China Federation of University and School Sport, the boys’ and girls’ teams played against local sides from Swansea, Cardiff and Newport, and also visited the Cardiff City and Swansea City academies and stadiums. They also attended Cardiff City’s home game against Derby County.

The group was hosted by the FAW Trust, which organised a guided tour, study workshops and practical training sessions before the youngsters played matches against local junior teams at Dragon Park, the Wales National Football Development Centre, in Newport.

Craig Gill, who is senior lecturer in Football Coaching& Performance at USW, said the visit enabled the young players to get an understanding of the work USW is doing to develop the next generation of football experts.

“China has a vision to be a world football superpower by hosting and winning the World Cup by 2050,” he said.

“The national football vision in Wales - ‘Take Welsh football to the world; Intensify the power of football at home’ - is very closely aligned to that of China’s, as both countries are preparing for the future to help them build the foundations to be successful.

“To help support that, the programme included practical coaching and leadership sessions, and workshops and classroom-based seminars which examined the benefits that football can bring to individuals, communities and nations.

“We were delighted to welcome the students to USW, and give them an understanding of the work we are doing here to develop football experts, not just here in Wales, but across the world.

“We hope that this initial project will foster stronger links with China and that future opportunities for player development, coaching conferences and higher education provision can soon be realised.”