Helping to keep people safe on the railways 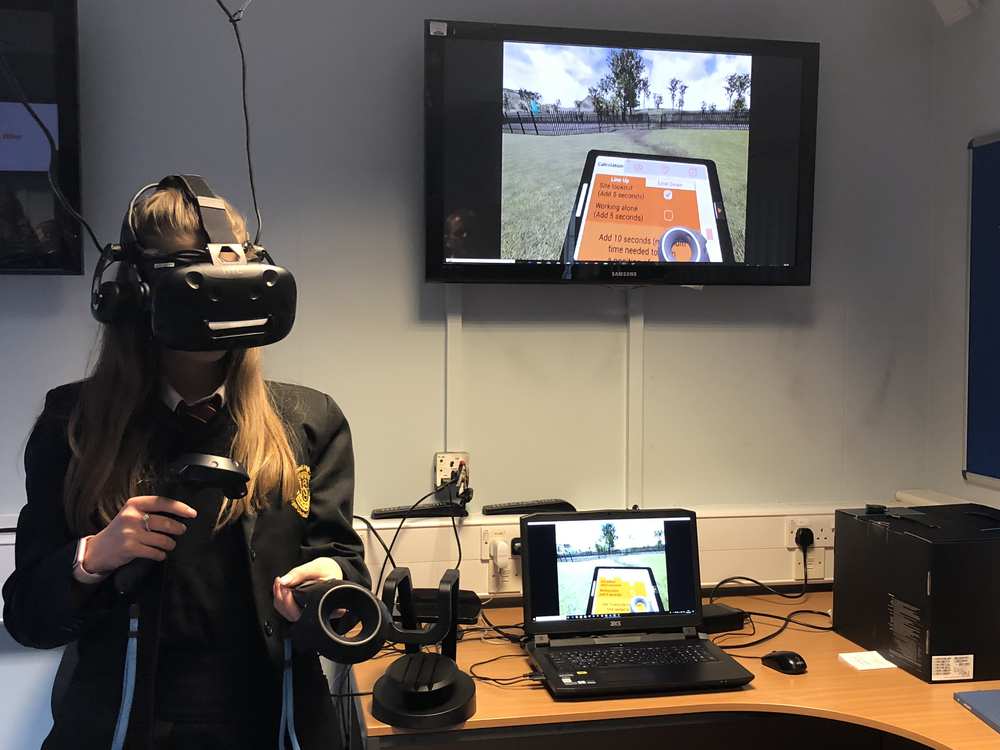 The VR system being used, and what users can see while using the technology.

SPECIALIST equipment that can help children understand the dangers of railways has been developed by a Welsh business.

Working in partnership with CEMET (Centre of Excellence in Mobile and Emerging Technologies), which is based at the University of South Wales (USW), and following support and advice from the Welsh Government’s flagship business support programme, Business Wales, Motion Rail has produced a virtual reality system that can give users a safe way to learn about the dangers posed by railways.

Motion Rail MD Emma Gilchrist initially developed the pioneering VR technology – which is endorsed by Network Rail - for training railway workers in how to manage the hazardous environments while working on or near the tracks.

A not-for-profit arm of the business was then established to take the technology into schools to educate children about the dangers they could face around railways.

“Safety is a key priority for us, and educating young people about the importance of rail safety is essential,” Emma said.

“Recent research has also found that more than 70% of adults believe using level crossings when the barriers are down is safe if no trains are coming; more than 28% believe crossing a motorway is more dangerous than crossing a railway; and only 18% of people recognise that crossing when they are distracted poses a danger.

“That’s why, to inspire the right behaviour, we must engage early and teach children about the importance of rail safety from a young age.”

Andy Thomas, managing director of England and Wales at Network Rail, said: “Britain has one of the safest railways in Europe but we cannot be complacent. As the railway continues to get busier, we must continue to work hard to make sure young people are aware of the dangers that exist on and near the tracks.

We’re proud to be at the forefront of innovation in the rail industry, so it’s fantastic to be working with Motion Rail, and supporting their delivery of virtual reality safety sessions in schools.

“We’re proud to be at the forefront of innovation in the rail industry, so it’s fantastic to be working with Motion Rail, and supporting their delivery of virtual reality safety sessions in schools.

“By engaging with young people early, we can raise awareness of rail safety, and help keep the communities we serve safe.”

Allan Spence, head of corporate passenger and public safety at Network Rail, said: “The railway is the safest way to travel in Britain. But, sadly, many young people are killed or injured every year through messing about on the tracks or not using level crossings properly. Shortcuts, distraction, or high spirits, too often lead to disaster.

“The great work by Motion Rail to develop their immersive virtual reality is a brilliant way to engage youngsters and help them understand the simple steps that will keep them safe. It is an example to other companies in the industry of the way we all need to work together to eliminate trespass and level crossing tragedies.”

Clayton Jones, Programme Manager at CEMET, said: “When Emma approached CEMET with her idea of educating children about the dangers of traversing level and foot crossings using virtual reality, I instinctively knew that the project had huge potential. We liked her idea, understood the reasons why she was unable to proceed independently and agreed to help.

“The CEMET Research & Development Team worked very hard to develop a realistic railway environment that not only looks like, but also sounds just like, the real thing.

“The children who used the product were completely immersed throughout and obviously enjoyed the experience. More importantly, they all learnt the safe way to behave in a railway environment, which is essential.

“Emma is an expert in her field and displayed a real passion for this project. I look forward to hearing about many more schools using the product”.

Business Wales introduced Motion Rail to CEMET following financial forecasting and business diagnostic support and the belief that Motion Rail could take a VR training academy approach to track safety and use its innovation to tap into competitive markets.

Business Wales adviser Steve Evans said: “It was clear from the outset of my work with Motion Rail that they had an interesting and extremely useful product that could have a huge impact on the way safety is taught within the rail network. They are a team that believes passionately in the difference they can make and the fact they are now engaged with Network Rail is extremely positive and I’m delighted Business Wales has played a part in that success.”

CEMET is based at USW and has £4.2m of backing from the European Regional Development Fund (ERDF) through the Welsh Government. Its purpose is to provide R&D support to SMEs in the Valleys, West and North Wales.