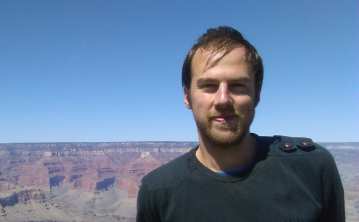 We're delighted to share that Richard Queree (BA Radio, 2013) has recently been announced as a winner of the annually awarded Charles Parker Prize.

Awarded annually to university and college students across the UK in recognition of outstanding feature production, the prize is named after the famous radio producer Charles Parker.

Richard's winning programme was commissioned by BBC Radio 4 for broadcast on the network as part of their New Storytellers strand.  A programme about all five of the winners and also other finalists went out on Radio 4 Extra earlier this month too.

Richard, who graduated from Bournemouth University's MA Radio Production degree with Distinction following completion of studies in BA Radio from the former University of Glamorgan (First Class Honours), was praised for delivering ‘social history made with a purpose’.

'Projectionists'  was ‘a tonic’ according to one judge, ‘well considered and thoughtful’, while for another it was ‘thoughtfully edited with a polished ending’. The programme was praised for its production and contributors who “tell the story with energy and colour, with splendid anecdotes and some excellent music and FX tracks.” “I liked this a lot,” enthused one judge, “a good central figure, and a sense of the dying of the light and contrasting contributions from different generations. Well recorded, good, vivid scenes (especially impressive in this regard).”

The programme was featured in the Observer Week in Radio Review and promoted by the British Film Institute via its social media channels.