Born in Britain, but raised in New Zealand, University of Glamorgan alumnus Richard James Burgess is globally renowned for his contributions to the music industry spanning the last 40 years. 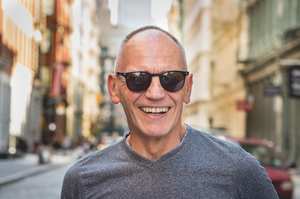 After showing early talent on the drums, Richard moved to study music in Boston and then the UK in the 70s. After completing his studies at the Guildhall School of Music and Drama, Richard worked with Spandau Ballet on their first two gold albums – setting the scene for the future of his career in the music industry.

Richard is credited with coining the term ‘New Romantic” which went on to be the defining musical genre of the 1980s. His book The Art of Music Production: The Theory and Practice, is now in its fourth edition.

Burgess has recently moved jobs from being Acting Director of Smithsonian Folkways Recordings, to CEO of the American Association of Independent Music (A2IM). A2IM is a mid-sized non-profit organization that represents independent record labels in many different ways, from practical help in traversing the constantly shifting business models, to drawing attention to the value that independent labels bring to the music industry.

Burgess explains that there is no such thing as a typical day in his role, which is what he likes so much about it. He has lots of travel, to the UK and to Los Angeles (lucky guy!); and completes large amounts of research in between business meetings, conference calls and networking. He says that none of his days are limited to 8 hours and no weekend is sacrosanct.

Whilst at the University of Glamorgan between 2007 and 2010, Richard completed his PhD in Creative and Media Studies (Musicology), specialising in creative endeavours in the recording industry. He believes that the process of obtaining a PhD added depth to his writing and teaching work and also improved his ability to research topics.

Richard states: “When I was at the Smithsonian having a PhD was almost essential to be taken seriously in the curatorial and academic circles. In the music industry in general it adds an extra layer of credibility in dealing with the highest executive levels.”

Burgess recognisea that the music industry in general can be challenging to break into. He believes you have to be enterprising, well networked, and prepared to lay a great deal of groundwork over a long period of time with absolutely no guarantee of a return. He put the necessary hard work in to his career in three different countries (New Zealand, the UK, and the US), across six different phases of his career and each time was like a new beginning.

Richard’s advice for those wishing to follow his path to success is simple: “Fail often and fail quickly.”

He goes on to say:

..the fact of the matter is that you can’t succeed without failing so you might as well get it out the way as quickly as possible. Fear of failure will prevent you from doing anything meaningful. Polite persistence has gone a long way for me as well.

Richard won the British Council's Education UK Alumni Award for Professional Achievement 2016,  representing the University of South Wales at the ceremony in New York. This is the first time an international alumnus from USW has been nominated for an Education UK Award, and this year Richard joined fellow nominees - in his and in other categories  - from universities including Oxford, Leeds and University College London.