Two Fashion Design students at the University of South Wales (USW) have designed leggings for Team Wales athletes – made from sustainable materials – to wear at the Birmingham 2022 Commonwealth Games. 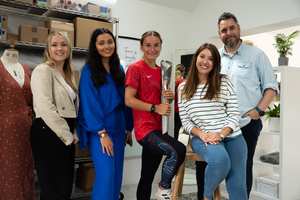 Bethan and OliviaBethan Jones and Olivia Soady, both in their final year, won a design competition set by Commonwealth Games Wales in partnership with USW.

The students worked closely with Onesta, an award-winning sustainable clothing brand based in Llanelli, to bring their designs to life, and in total, Onesta manufactured 360 pairs of leggings for Team Wales.

They were officially revealed last week (Friday 1 July) when the Queen’s Baton Relay passed through Llanelli and stopped at the Onesta studio, where the baton-bearer, Wales Women’s rugby international Jasmine Joyce, modelled the Team Wales kit.

The collaborative project was developed with funding from the USW Exchange Partnership and Engagement Programme, which enables organisations to directly benefit from scoping and feasibility support, as well as access to USW’s academic expertise. 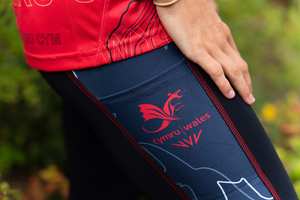 Following a brief from Team Wales, Bethan and Olivia’s designs focused heavily on sustainability, ensuring the leggings are practical, long-lasting and have a clear Welsh identity.

Olivia said: “From the offset it was made very clear in the brief that these leggings were meant to be worn and to last, which is something that Bethan and I took into consideration throughout the design process. I’d read an article on all these amazing things which had originated in Wales, which gave me the idea of our country being small but mighty.”

Bethan added: “Olivia and I both had a very similar concept. Mine was all about Welsh power symbols, and being proud to be Welsh, alongside the importance of sustainable production. So we merged those ideas together and got something very contemporary, which we’re really proud of. Being able to work on this project with Team Wales is such an exciting opportunity for me, and something which really aligns with my values as a person and as a designer.”

Owner and founder of Onesta, Gabriella Diana, said: “We are proud to have been selected as the manufacturer of casual leggings for Team Wales, designed in collaboration with USW students. Manufacturing in Wales not only lowers the carbon footprint of our clothing, but also puts money back into our local economy, strengthening industry here in the UK, and providing skilled jobs to local people and graduates. Plus, we know all our garments are made by happy hands. Working on this project with Team Wales has been really exciting, and we have loved being involved in developing sustainable sportswear for the Commonwealth Games.” 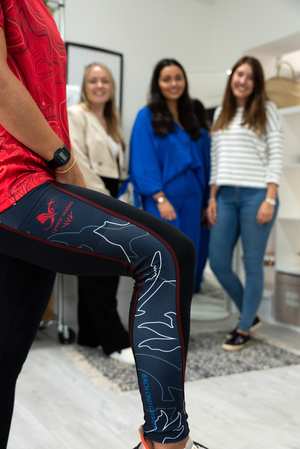 Stacey Grant-Canham, lecturer in Fashion Design at USW who worked with Bethan and Olivia on this project, said: “The designers are fully immersed in the industry from day one on the Fashion Design course here at USW; both taking advantage of our option of a year out in industry, they have the commercial awareness and creativity underpinned with a strong knowledge of circularity for fashion. It’s a real winning combination. The fact that they opted to collaborate is testament to the holistic way they see their place in this global industry too.”

"We first ran this competition with USW for the Gold Coast 2018 Games, and we’ve built on that success, and we love seeing the athletes wearing the finished design.”

Chris Jenkins, CEO of Commonwealth Games Wales, said: ‘’Working alongside USW on such projects is really important for the organisation; not only does it provide a platform for young designers and university students to get a feel for the industry in the ‘real’ world, but for us, it opens up our support network to people who wouldn’t necessarily be drawn into sport.

"The Commonwealth Games is more than a sporting event – it’s an opportunity to bring in communities across the country and support Wales on a global platform. Congratulations to both designers, and I’d like to thank USW and Onesta for all their hard work.”

Contact our Business and Engagement team to discuss collaboration opportunities.