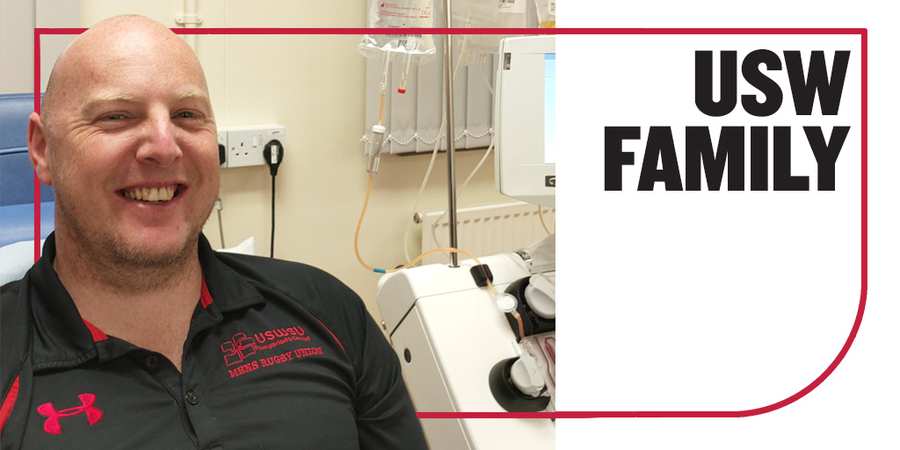 Richard Roberts, 41, who is Conference Operations Co-ordinator at USW, has been a donor since he was 18. That decision has saved a child’s life.

How did you get involved in donating blood?

When I was 18 I was at Pontypridd College., There were some donation sessions going on so I went along and gave my first donation.

You’ve been donating for quite a few years now, how much blood have you actually given?

I no longer donate whole blood, as it’s known, instead I now give platelets, which I have been doing instead since I was 21. That is also when I went on the bone marrow register.
In total I have donated 301 pints, but this has been both whole blood and platelets, but platelet donation is done in different way.
Rather than taking your blood and using it to help someone else who needs it, the platelets are removed by running the blood through a tube from your arm, then through a machine, and then the blood is put back straight again. I will often do a triple donation, so three units at a time, so with that it adds up to the 301. If you did whole blood, you wouldn’t get near to that number.
I donate because I know people who have needed the platelets, and how important it is to help a number of patients who have things such as clotting disorder or cancer, and how they can help with the treatment.

You give bone marrow? What has that been like?

Yes, I was asked to go on the bone marrow register when I went to give blood in Cardiff, and agreed straight away. They did a quick finger prick test and then analysed it to see if I was a match for anyone.
A few months later, which is really quick, I was called by the Blood Service and told I was a match and could I go for a few more tests. After the tests I was told I was a really close match for someone who was on the register, so was happy to donate marrow.
There’s a lot of stigma around giving bone marrow, like it’s a really bad operation and everyone thinks it really hurts.
But, in my experience, there were no side effects. I had a lumbar puncture under general anaesthetic and it was taken out of my spine. It involved me being in hospital for about four days.

Was it worth doing?

Definitely. Straight after the operation I was told that everything went to plan.
Then, a little while later, I heard that the person who received my donation was a young boy from Glasgow, who had leukaemia, and my donation was the last hope for him to survive.
I’m not allowed to know much about him, but I was told that he is now 100% fit and healthy, which is really great to know.

Would you advise other people to donate?

I know there's a few people around who are afraid of donating blood or having needles, I can understand that. But you just have to get over that fear because you know that the donations can save somebody’s life.
So, for like a small amount of pain, they're going to potentially save a baby, or somebody that's got cancer. It is well, well, well worth it.