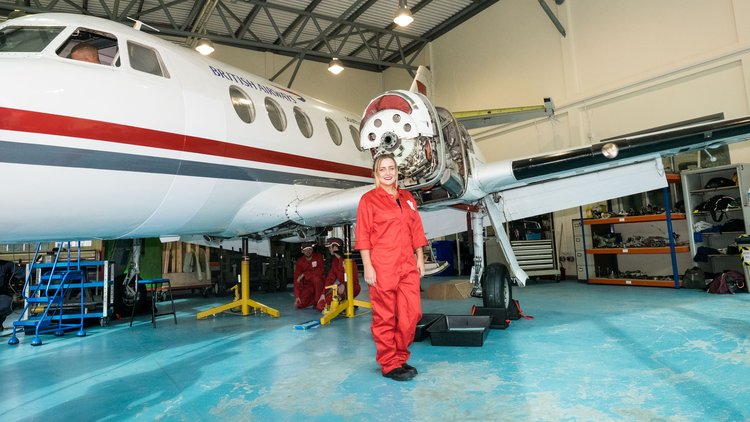 Katie Danahar went to Treorchy Comprehensive School before coming to USW to study the Aircraft Maintenance Engineering degree, coming via the foundation route. Katie recently went to British Airways Maintenance Heathrow for a placement and has now returned to University for her final year.

“I’ve always thought about joining the RAF. Both of my parents were in the RAF, so an aircraft maintenance degree was the perfect choice.

The thought of being a female in a male-dominated industry like aerospace was very daunting, but I chose to follow my ambitions and, after almost completing my degree, I can say without hesitation that it was the right decision.

Doing the work placement at British Airways really confirmed that for me. I was the only female there but it didn’t matter one bit - the engineers were welcoming and willing to help, and I had great fun while working alongside them.

During the placement, I worked in the Fleet Support Unit which performed scheduled maintenance on smaller aircraft such as the A319, A320 and Boeing 767. I also worked with the Cabin Engineering team which included all maintenance work inside the cabin, and spent time with Non-Destructive Testing (NDT) where I was involved in doing eddy current testing on a Boeing 747.

I really enjoyed getting my hands dirty and being involved in as many jobs as possible from wheel changes and engine changes to fan blade changes and engine runs. It was great to be able to turn the knowledge I had learned in lectures into practical skills.

In turn, the practical skills I gained on placement have given me a much better understanding of the modules I am taught in University.

I chose to do the aircraft maintenance degree at USW as it was a licensed course which enabled me to obtain my B1 modules. It also included the opportunity to understake in a part 145 environment.

Thanks to the aircraft maintenance course and my placement at British Airways, I now have so many career options. I could go into the industry in a number of roles, or join the RAF as an officer so it really has broadened my opportunities."