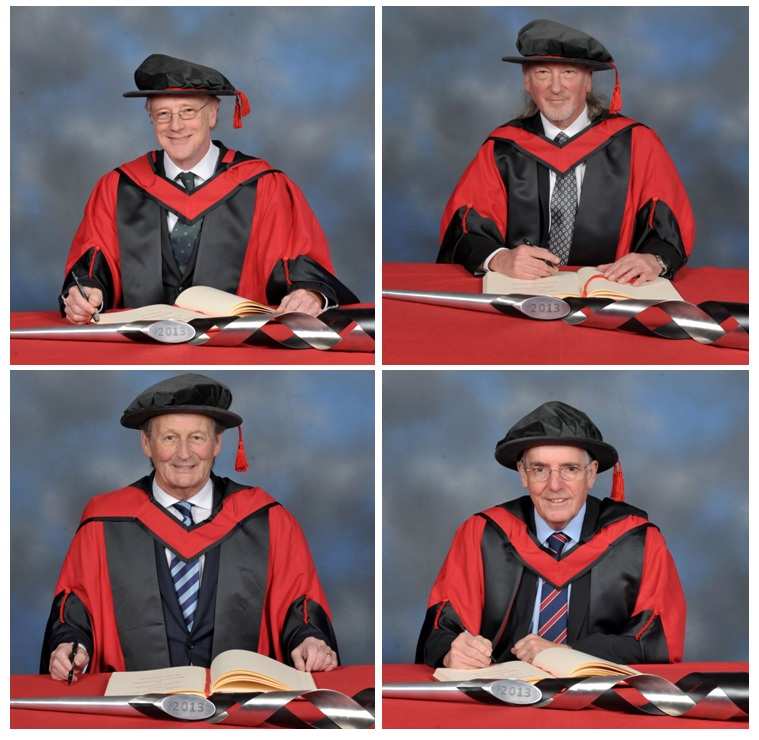 A Formula 1 engineer, a rock guitarist, an entrepreneur and a nursing chief executive were all presented with Honorary Awards during this week’s Graduation ceremonies at the University of South Wales.

Dick Glover joined McLaren Racing in 1995, where he formulated championship winning F1 fuels for the group. He moved to McLaren Automotive in 2007 as Technical Director, leading the engineering development of the 12C supercar through to the start of production.

Earlier this year Dick became Chief Technology Officer for McLaren Applied Technologies, leading technology development in a business that provides advanced products and services for the traditional markets of Formula 1. He was awarded an Honorary Doctorate of Technology of the University in recognition of his commitment to developments in engineering.

Originally from Brecon, Roger Glover made his debut with Deep Purple in the early 1970s, and after releasing solo records he joined the reformed band in 1983 for their comeback album, Perfect Strangers. He released a new solo album in 2002 and continues to tour and record with the current Deep Purple line-up.

Roger’s musical aspirations started as he grew up listening to rock and roll music in the 1950s, and decided to form a band with some school friends, in which he wrote songs and played bass guitar. He was made an Honorary Fellow of the University in recognition of his contribution to music and the creative industries.

Peter Thomas started his business career by building national company Peter’s Savoury Products with his father, brother and sister, perhaps now better known as Peter’s Pies. After selling the business for more than £95million in 1988, he went on to create Atlantic Property Developments Plc. He was made an Honorary Fellow of the University in recognition of his commitment to business and entrepreneurship.

His other great passion is rugby, and as Chairman and benefactor of the Cardiff Blues, is passionate about helping to deliver European success to supporters of the club. He was appointed CBE in 2012 for services to business, sport and charitable work in Wales.

Dr Peter Carter was appointed Chief Executive and General Secretary of RCN in 2007. He had previously spent almost 12 years as Chief Executive of the Central and North West London Mental Health Trust, and was awarded an Honorary Doctorate of the University in recognition of his commitment to the nursing profession.

Peter started his career as a psychiatric nurse, and has held clinical and managerial posts in Hertfordshire, Bedfordshire and London. He was awarded an OBE in 2006 for services to the NHS.

Professor Julie Lydon, Vice Chancellor of the University of South Wales, said: “We are delighted to be awarding honorary degrees to outstanding individuals who have made a significant contribution to their fields. Their expertise, knowledge and experience play an important role in the economic, social and cultural life of South Wales and the world, and Honorary Fellowships are a fitting way of celebrating these achievements.”