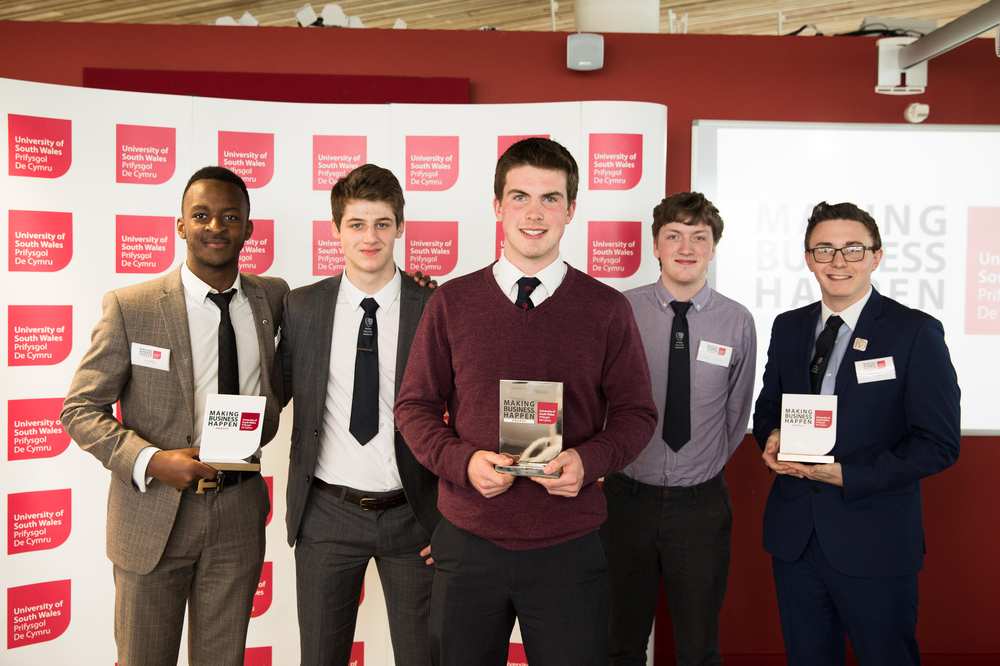 A 17-year-old budding entrepreneur from Llandovery has scooped a national award ahead of competitors from across the UK.

Huw Richards-Price, who is studying at Llandovery College, took the Aspiring Entrepreneur Award – sponsored by NatWest – at the University of South Wales (USW) Making Business Happen Awards, which were held at its Newport City Campus on March 22. He also received £3,000, shared with his college, along with legal, financial and business mentoring and support from the USW Business School.

“The market for sustainable food is growing, more and more people are becoming aware. In 2013 it had a share of £193.6m of the organic market, up 11% from the year before,” he said in his entry.

“Promoting the benefits of local food and helping to build links between growers and their communities will assist the local economy, as money will stay in the area, as well as the environment, since sustainable growing methods and being local will mean there will be minimal impact. I intend to do this by offering information and advice through online courses, books and podcasts.

“Communities will become more resilient and more food secure; they won’t depend on sourcing food from afar.  By improving the links with local food, communities can work together and know exactly what they are eating.”

After being named as the winner, Huw added: “It’s such an amazing feeling to win the award, there were a lot of excellent business ideas and to be considered the best is such a great feeling.

“I have met some inspirational people and I hope to finish my sixth form education and go on to fully concentrate on my business.”

The 10 finalists this year came from across the country – from Oldham and Huddersfield in the north of England, Leicester and Dudley in the Midlands, Cardiff and Llandovery in Wales, and Somerset in the South West.

Now in its second year, the competition gave student entrepreneurs, future business owners and social entrepreneurs the opportunity to operate in a real-world setting and prove their abilities. Open to school or college students undertaking a level 3 qualification – such as AS/A-levels, BTEC National Diploma Level 3 or Welsh Bacc – individuals or groups of up to five people had to come up with a business idea, or solution to a problem in their own community or the wider marketplace.

Professor Jonathan Deacon, of USW’s Faculty of Business and Society, said: ”The finalists in the competition came up with some fascinating business ideas – from make-up through to technology, support for disabled people to online shopping, and food sales to plumbing.

“What it shows is that young people not only have the imagination to come up with some amazing ideas, but also the expertise needed to carry these ideas through to fruition, and to take them to market.

“As a university that focuses on entrepreneurship, engagement and employment – which this competition brings together – we are delighted the competition has received such strong entries, and that future entrepreneurs are showing what they can do.”

“Initiatives such these are a vital part of the entrepreneurial landscape, celebrating those who are already on the road to success and encouraging those who are taking their first steps on the journey. We look forward to hearing lots of inspirational stories from this year’s awards entrants.”