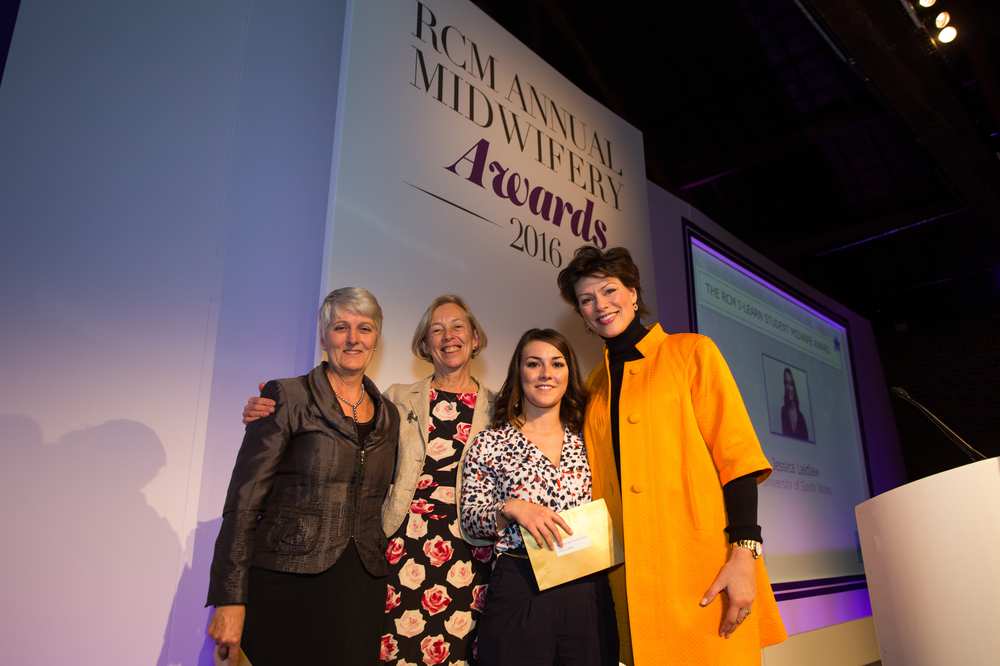 Midwifery graduate Jessica Laidlaw has been named as a runner-up in the student midwife category at the Royal College of Midwives Annual Midwifery Awards 2016.

Jessica, 22 from Pontprennau in Cardiff, received her second place in The RCM i-learn Student Midwife Award at a ceremony in London this week (Tuesday 8 March). She was also presented with a £500 prize.

Jessica graduated from the University of South Wales with a midwifery degree in summer 2015. She was nominated for the award by her lecturer Joy James.

Jessica said: “I feel honoured to have even been shortlisted for the award. I was nominated by my midwifery lecturer for the work I did with raising awareness of female genital mutilation. I worked with FORWARD, the UK’s leading FGM charity, and developed a poster for them to use when raising awareness of the issue. This work was not done for me to be recognised, I did it because I wanted to. So to be recognised especially for such a prestigious award is amazing!”

Jessica now works as a midwife at the Royal Glamorgan Hospital.

She said: “The course was an intense three years that prepared me for the job I am doing today. Coming straight from school I had no idea of my strengths and weaknesses, but I've surprised myself with what I am capable of.

“The practical lessons and examinations which simulated real life situations were great at bridging the practice and theory gap, as the course is 50% theory and 50% practical.

“When you go on a placement, you work as part of the midwifery team from day one. Being thrown in the deep end really opens your eyes! The first time a couple sees their new-born baby makes all the hard work worth it.

“The University has provided local and national links that I wouldn't have otherwise known of. These links have helped to take my piece of coursework further than I could have imagined.”

Joy James, Senior Lecturer in Midwifery at USW, said: “Jessica is a fantastic role model demonstrating to other students how hard work can result in success. By turning a theoretical assessment on a public health issue, into one that could have a real impact in society is truly inspirational”.

Caroline Walker from Forward, said: “We were so pleased with Jessica’s poster design as it managed to convey the complex elements of the practice and consequences of female genital mutilation (FGM) as well as the sense of urgency to put a stop to it.

“The poster has proven really useful to us in our campaigns and we are grateful for her gifting us the design which we now use in posters in community centres, GP surgeries and are even adapting into a t-shirt. We wish her the best of luck in the future and are delighted to know that there is one more midwife who is equipped with the skills to knowledgably and sensitively provide services to a future mother who has undergone FGM; an incredibly valuable asset to the health service!”