USW scientist helping to clean up the world 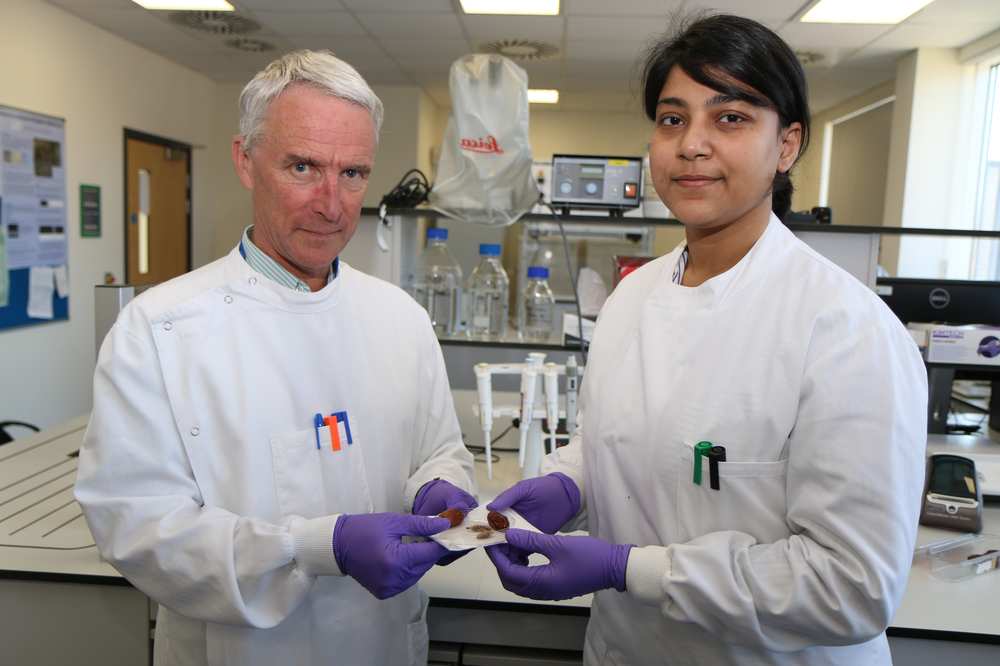 Former USW Professor Denis Murphy with PhD research student Farzana Rahman, who is part of the team working on the project

Some of the most deadly environmental toxins, including dioxins, could soon be a thing of the past – thanks to the joint efforts of a Welsh scientist and partners in Syria and France.

Even though they could only communicate through the internet, the University of South Wales’s Professor Denis Murphy, Dr Abdulsamie Hanano of the Atomic Energy Commission of Syria in Damascus, and Dr Elizabeth Blee at the University of Strasbourg in France, have developed a new technology to remove the most deadly forms of toxins from the environment.

Utilising the natural properties of date palm seeds – the team discovered that, by grinding the seeds into microparticles, they can then be put into water, where they naturally absorb the toxins and then float to the surface. Date palms grow throughout the Middle East and are especially common in Syria. 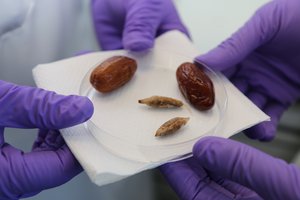 Dates and date seeds, that are used in the process.

“Almost every day it seems that we hear bad news from Syria but, despite all the difficulties in the region, a few exceptional Syrian scientists, such as Dr Hanano, are still managing to carry out valuable work with overseas colleagues,” said Prof Murphy, who specialises in biotechnology.

“Dr Hanano is happy to be identified by name, but we have made the decision to not release any images of his team because the potential threat to their lives. Their research could help clean up some of the most polluted parts of the world, but is being carried out from within a war zone.

“Across the world, this discovery could have dramatic benefits, as the toxins the date seeds ‘collect’ can cause cancer and birth defects and accumulate in meat, milk, fish and seafood due to contaminated soil and water.

“The results, which are about to be published in the prestigious journal, Frontiers in Plant Science, suggest that date seed particles could be used to carry out an ecological clean up – getting rid of toxic spills or other environmental contamination that might threaten human health.”

Dr Hanano and Dr Blee did the initial research for the project, with Prof Murphy and his team in South Wales carrying out the bioinformatics – the molecular DNA and protein analysis. The team are now considering how to make commercial use of the product.

“We have been privileged to work with such a great team of researchers on this important project, that could lead to improved food safety and environmental protection,” Prof Murphy added.

“We have been particularly impressed by the dedication of our Syrian colleagues who carried on with their research in some almost unimaginable conditions.

“We look forward to happier times for the people of Syria and to further scientific collaboration between our countries.”