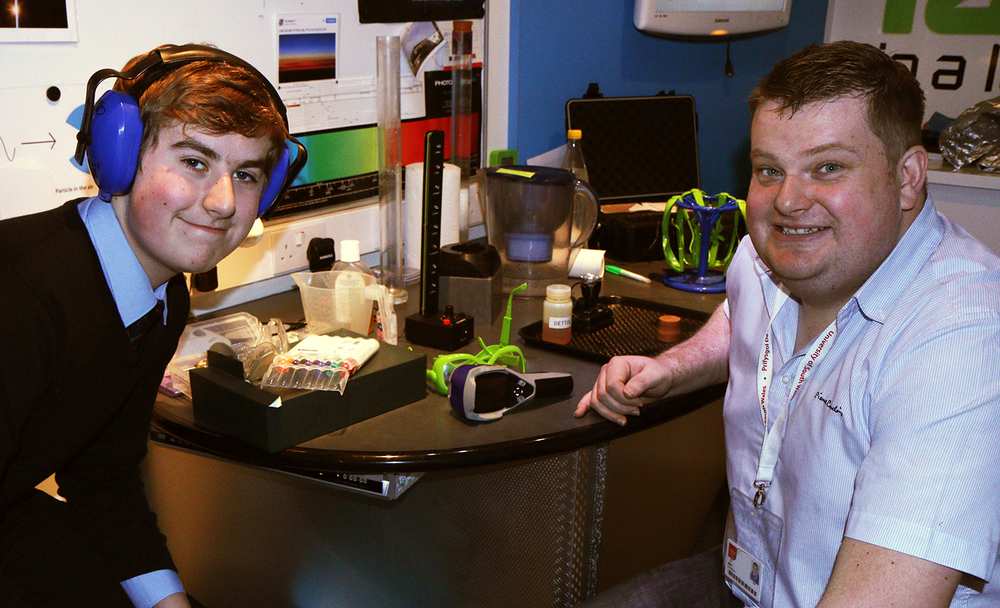 Archie Tulloch, 15, and Ian Simmonds from USW, during the Lab in a Lorry visit to West Mon School.

PUPILS from West Monmouth School in Pontypool have been given a taste of science during a special visit.

Lab in a Lorry, a mobile science lab for young people, visited the school last week (Dec 13-Dec 16) to connect young people in the region to science.

Groups from the school took part in organised visits to the Lab, which is designed to inspire the next generation of scientists and engineers. One of the volunteers demonstrating the experiments on show was Ian Simpson, a former pupil of the school who is now a science technician at the University of South Wales (USW).

The Lab in a Lorry programme - which offers 11-14-year-olds the opportunity to explore science through specially created interactive experiments - has been visiting schools, youth organisations, major events, and communities free-of-charge across the UK and Ireland since early 2005. The programme will be running in Wales until next March.

The 44ft lorry is fitted with three distinct lab areas where groups of up to six young people can take part in each of the fun and informative experiments. The programme is delivered by volunteers – all scientists and engineers – who give the students a chance to try experiments and think about the surprises and questions that arise.

Lab in a Lorry in Wales is a partnership between the Institute of Physics (IOP) and the Welsh Government. The Schlumberger Foundation is a founding partner and volunteer assistance provided by STEMNET. The aim of Lab in a Lorry is to encourage positive attitudes towards science and to make science and engineering more attractive.

Helen Obee Reardon, of USW, who is also STEM Co-ordinator for First Campus – a partnership of the universities in South East Wales, which aims to raise the aspirations of young people and encourage them to go on to study at college and university - said: “It’s great to see USW staff, such as Ian, getting involved with the effort to raise interest in STEM subjects, and passing on his knowledge to pupils at his former school.

“Earlier this year Lab in a Lorry visited USW, where schoolchildren from across the region the chance to see for themselves the importance of science, and how exciting it can be, and we’re delighted once again to play a part in raising interest in science among future engineers, mathematicians, technology experts and scientists.”

Institute of Physics spokesperson James Bamford said: “Lab in a Lorry is a fantastic experience for young people. It generates excitement and curiosity in science by letting them explore experimental science for themselves with the help of expert mentors. If there are any teachers in Wales that would like the lab to visit them at their school before March 2017, then please get in contact.”

Dr Frances Saunders, President of IOP, said: “School students across Wales are in for a real treat.  The experience has been designed to give students a real taste of just how exciting experimental science can be.”

Schools can request a visit from Lab in a Lorry through the website www.labinalorry.org.uk which also contains information on how to become a volunteer.

Lab in a Lorry is actively recruiting additional partners to ensure the programme expands and continues to be a free experience for all. For more information on partnerships, visit the Lab in a Lorry website.