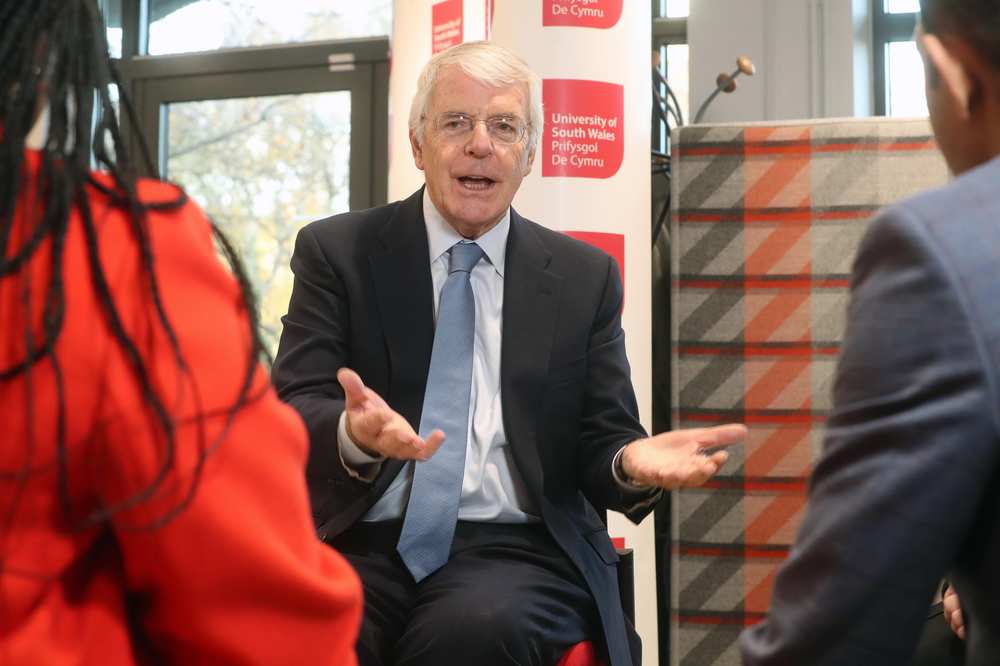 Former Prime Minister Sir John Major gave his views on the challenges facing the world during a visit to the University of South Wales (USW) this week.

After being greeted by Vice-Chancellor Professor Julie Lydon, Sir John – who was Prime Minister from 1990 until 1997 – met students and addressed a packed lecture as part of USW’s Global Choices: Talking Points.

During the visit, the former Conservative MP for Huntingdon spent 45 minutes answering questions from USW Global Governance Masters students, which is a regular part of the university’s Global Choices: Talking Points programme.

He then gave his keynote lecture, entitled ‘A World In Transition’ and organised in partnership with the CBI, to an audience including school groups, members of the CBI, USW staff and students. A Q&A session followed.

Prof Lydon told those attending: "As a University, USW is all about ensuring that our graduates are prepared for the increasingly demanding workplaces they choose to enter. We support our students to become highly employable, creative and culturally rich graduates, with the skills to find employment that will enable them to be agents for positive change in the world.

"Our Global Choices lecture series, of which tonight forms part of, is just one vehicle through which our students, and the wider university community, can access intellectual thinking and form new opinions on today’s global challenges."

Global Choices: Talking Points is a series of public lectures at USW, given by leading artists, diplomats, politicians and campaigners that address some of the most complex and pressing challenges facing the world today. Those who attend the lectures are able to ask questions of people who have been witness to - and, in some cases, participants in - major world events.

Lady Shami Chakrabati, Shadow Attorney General for England and Wales and former-Director of Liberty, is giving the next lecture in the series at USW on Thursday, November 22.

More details are available on the Global Choices webpage.