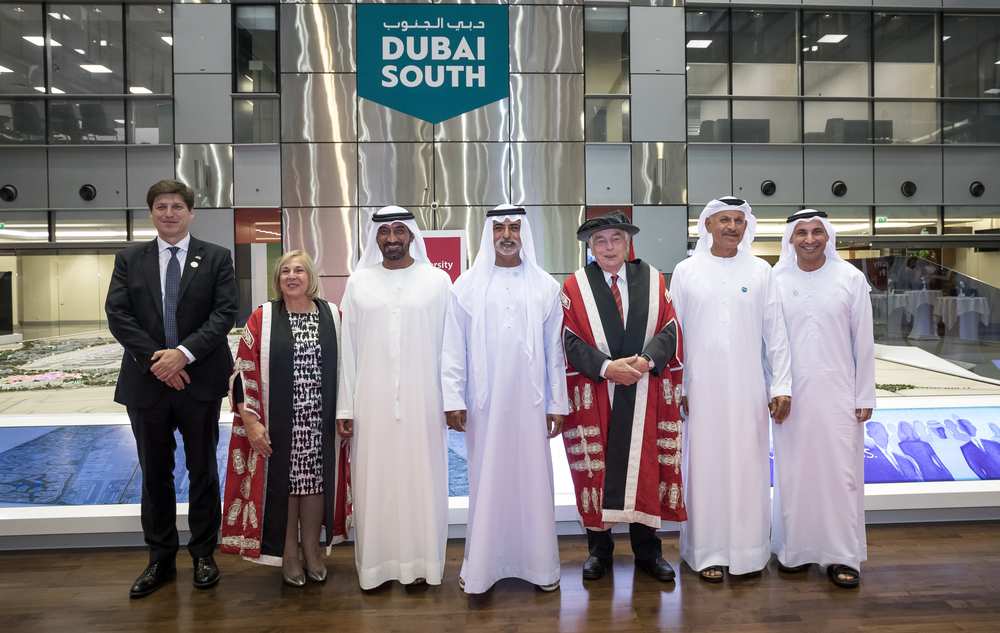 The University of South Wales (USW) has opened a new aerospace academy in Dubai South.

The purpose-built 3,000 square metre facility at the Dubai South Business Park has learning and teaching space over two storeys, including an EASA/GCAA accredited workshop with an aircraft and CFM56-3 jet engine, mechanical principles laboratories and soundproofed maintenance areas.

Dedicated laboratory space for electronic practical tasks and avionics systems are also a key feature that will provide hands-on practical experience for students, and composite-based equipment to produce sample materials. The tooling for which has been provided through a strategic partnership with Snap-on Tools Industrial.

The launch event is the culmination of a two-year project, which followed the signing of a Memorandum of Co-operation (MoC) with Dubai Aviation City Corporation (DACC), the parent organisation of Dubai South, in May 2016.

“Dubai South’s journey to become the world’s major aviation hub is well underway, and having such a key role in the development is major plus for the University of South Wales,” said Prof Lydon.

“Our recognition as a leader in the field of aircraft maintenance engineering education meant that we were a natural choice to be at the centre of the on-site education development, and we’re pleased to have been selected to establish this partnership with Dubai South.

“Having worked with some of the major players in the aviation industry, we have developed sector-leading skills with an international reputation. Being involved with Dubai South as it develops into a major hub on the global stage will mean that USW will be in the right place to do business with the main operators in the aviation arena.

“Dubai South is where key aerospace markets are going to be for an international university such as USW.  As the city expands, USW will also be able to build on strong relationships so that other courses developed in South Wales can be made available to global organisations operating at Dubai South.”

Dubai South is a planned city of a million people around the new Al Maktoum International Airport. The airport will eventually be the world’s largest, handling an estimated 220 million passengers and 16 million tons of cargo each year, and will be close to Jebel Ali Seaport and adjacent to the Dubai South Logistics District. The 6.7sq km Aviation District will also be the permanent home of the Dubai Airshow and the Middle East Business Aviation Show.

H.E. Khalifa Al Zaffin, Executive Chairman, DACC and Dubai South, commented: “Our partnership with USW further boosts Dubai South’s position as an emerging global aviation hub, and establishes Dubai as a leader in the region for education related to aviation and innovation that will upskill the UAE’s workforce.

“The future of the region’s aviation sector is unfolding right before us with the opening of the University of South Wales aerospace academy.

This new development is set to open doors for the next generation of aviation experts in the UAE by being strategically located right at the doorstep of the world’s largest airport, it provides students with a combined experience of academic rigour and hands-on training in an ideal setting at Dubai South.”

For more information about the University of South Wales Dubai campus and programmes, please visit: www.southwales.ac.uk/dubai