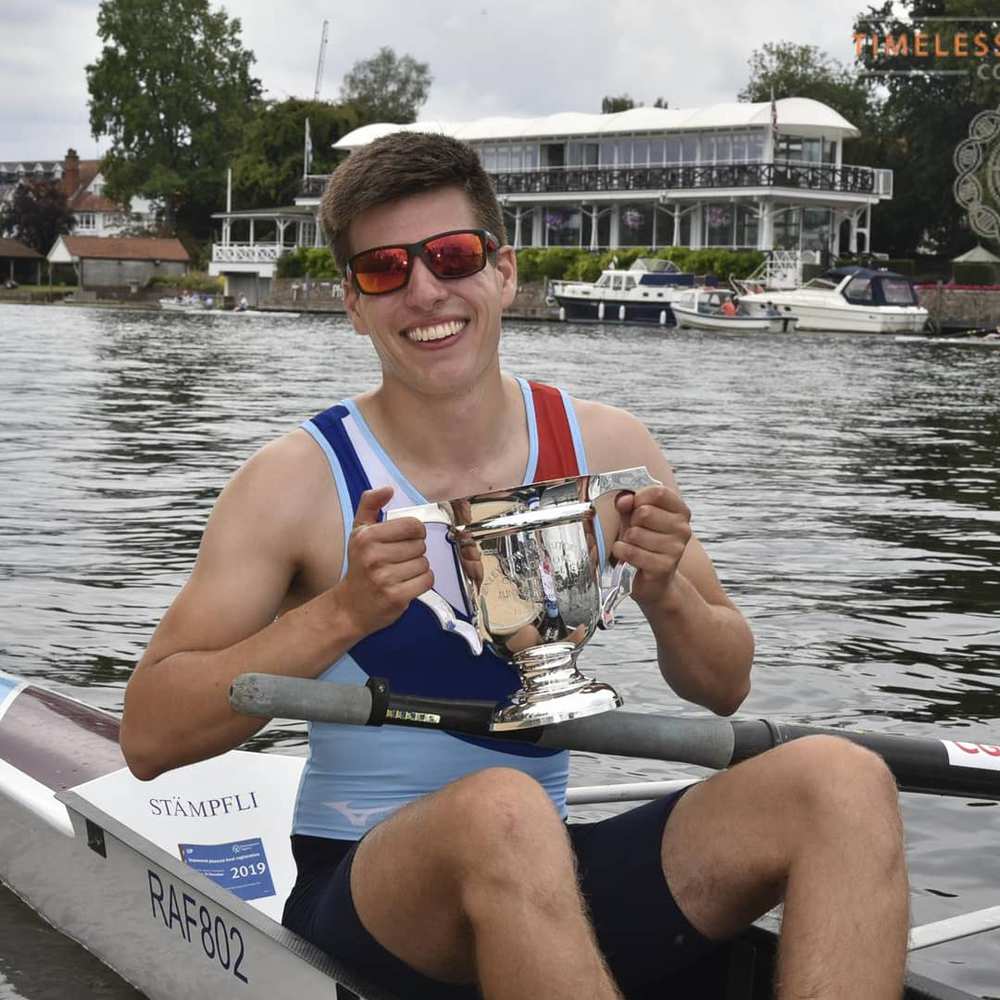 AFTER facing and overcoming a serious illness, Ollie Banks has more reasons than most to be looking forward to 2020 - next year could see the 23-year-old scooping international sporting honours as a rower, and starting his career in the RAF.

But the start to 2020 could have been so different for the University of South Wales (USW) graduate, after he was diagnosed with a breast tumour at the beginning of 2018.

“I found a lump and went to the doctor to see what it was, and was told I had a tumour,” said Ollie, after becoming one of the one in eight men who are diagnosed with a breast tumour yearly.

“I underwent treatment between June and May last year, but then discovered that the lump had returned so had to get back for more.

“Eventually I had what is called a chemical mastectomy to remove the tissue affected, and was then given the all clear in January 2019.”

News for Ollie that he was free of the disease meant he could return to his work at USW, and crack on with his studies. He graduated in the summer with a degree in Aeronautical Engineering.

He is currently carrying out a year-long role as Activities Officer for the Students’ Union. As part of this Ollie led an SU cancer awareness campaign called Nuts, Nips and Others Bits, which urged people to check for anything unusual on their bodies, and to get checked up by a doctor.

The campaign finishes on March 1, when Ollie will run the Newport Half Marathon dressed as a boob for CoppaFeel, which highlights the importance of people checking themselves for breast tumours.

While the SU job keeps him busy, he has also been pursuing another passion, powering through the water as an accomplished rower.

“I started rowing in 2011 and when I joined USW I saw there was no Rowing Club, so decided to assist in setting one up, which got me involved with the Students’ Union,” he explained.

“Over the years I have competed for the university, but also for Castle Dore Rowing Club, and RAF Rowing Association. I have also coached the university team since 2018.

“However, when I had my diagnosis I was told that I may not be able to row again, which was obviously devastating news, so getting the all-clear meant I could return to doing a thing I loved.

“I also lost a lot of weight during the treatment, so with the help of the USW Strength and Conditioning team have been able to gradually build weight back up and return to race fitness.

“Recently it was great to see my hard work and dedication towards rowing as well as helping others was recognised when I was nominated for the Welsh Sports Awards 2019.

“Ultimately, I was unsuccessful in winning the category I was nominated for but it was a great feeling to be recognised.

“So I’m doubly lucky that, next year, I’ve also been chosen to represent Team GB at the International Contest of Seamanship, which will take place in St Petersburg, Russia, in August. The event sees teams from across the world competing. I’m the only competitor from a Welsh university, so will be looking to fly the flag for the country.”

While keeping busy with his SU work, and preparing for international competition, Ollie is also looking forward to a career in the RAF.

“I come from a military family, so it’s no surprise I have followed in their footsteps,” he said.

Now looking forward to a busy life in the air force, and continuing his rowing efforts, Ollie is using his experience of a serious illness to drive him on to future successes.

“I’ve learned a lot over the past few years, that success isn’t a straight line and you have lots of ups and downs,” he said.

“You have to make sure you have a good support network, learn from others, and find the positives in everything you do. Setbacks happen, but you have to take time to get over them. If you get injured make sure you take the time to rest, recover and rebuild.

“And you have to be enthusiastic about what you do, congratulate yourself for every achievement, even the little ones, and remember to reward yourself.

“Life can be a challenge at times, but doing what you really enjoy can make a massive difference.”

As part of the International Contest of Seamanship challenge, Ollie has to raise £2,000 to cover costs such as kit and transport. He is halfway to reaching the total, and next year will be having his legs waxed as well as doing a couple of sponsored fitness challenges.

Any local companies who would like to sponsor him should visit https://www.justgiving.com/crowdfunding/OBanksACGB