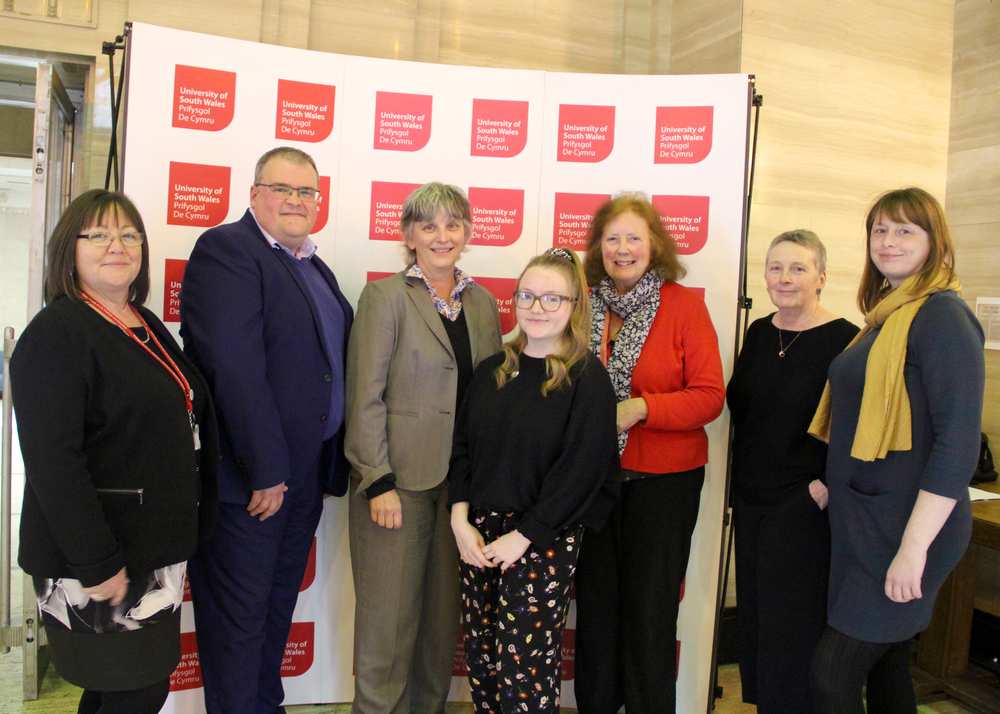 Julie Morgan AM, Deputy Minister for Health and Social Services (third from right) launched the key ‘Study Expert Reference Group’ (SERG), alongside (from right) Karen Berrell, Margaret Provis and Anastasia Stockton, the three citizen co-chairs of the group. They were joined at the meeting by Dr Nicky Genders, Head of the School of Care Sciences, Professor Mark Llewellyn, Director of the Welsh Institute for Health and Social Care at USW who leads the academic team alongside Professor Fiona Verity, Director of the Wales School for Social Care Research, based at Swansea University.

A film made at the University of South Wales (USW) is highlighting how experts are evaluating a Welsh Government Act that is supporting those who need care, and their carers.

The Welsh Government has commissioned a partnership of leading academics across four universities in Wales, and expert advisers, to deliver the evaluation of the ground-breaking Social Services and Well-being (Wales) Act 2014.

The project will provide an independent and objective assessment of the implementation of the Act and the way in which it has impacted on the well-being of people who need care and support, and their carers.

The SERG was the first to see an early cut of the film, released today, which describes the approach that the team is taking to the study.


The film – which can be viewed here - showcases the skills of Marina McDonald, the Welsh Institute of Social Care’s (WIHSC) graphical facilitator, and offers an insight into the way that the complex study will run.

Professor Mark Llewellyn, a Health and Care Policy specialist at WIHSC, said: “The study is at an exciting stage, and we are pleased to be able to share our vision for the study with others.

“We are delighted to have received the support of the current Deputy Minister Julie Morgan AM for the study, and the backing of the former Deputy Minister –Gwenda Thomas – who was responsible for driving the Act through its legislative journey. We are looking forward to commencing the fieldwork, starting in the autumn.”

More details about the launch of the landmark study are available at https://www.southwales.ac.uk/news/news-2018/usw-professor-lead-partnership-welsh-universities-deliver-landmark-study/