Graduation tales: I didn't let Tourette's stop me from getting a degree 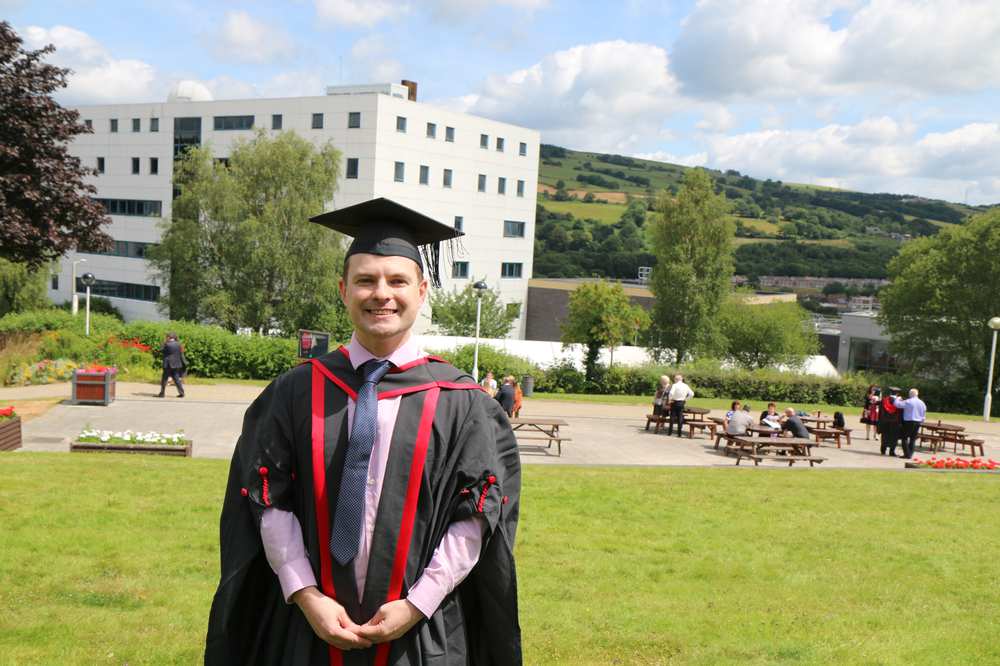 Michael Griffiths, who has Tourette's, has graduated with a degree in adult nursing.

Working towards a degree while managing a neurological condition has thrown up some challenges for Michael Griffiths.

But the 35-year-old from Cardiff hasn’t let the fact he has Tourette’s stop him getting his qualification, and is now heading into a job in the haematology day unit at the University of Hospital of Wales in Cardiff with 2.2 honours degree in Adult Nursing from the University of South Wales (USW).

Before successfully applying for a place on the degree course starting in March 2017, Michael had been a healthcare support worker for Cardiff and Vale University Health Board, but decided that he wanted to develop his expertise in order to enhance his job prospects.

But taking up the place on the degree meant that Michael had to manage a new set of challenges.

“I’m the sort of person who always sees the possible negative scenarios in any situation, so starting university put extra pressure on me that can accentuate my condition,” he explained.

“But throughout my time at USW I was put at ease and given total support for what I was facing.”

Michael explained that his condition is not ‘TV Tourette’s’ – with regular uncontrolled swearing being the usual stereotype of those who have the condition.

“My tics aren’t like that. Fingers or mouth sounds and facial tics are just some of the ways it shows itself. It’s not the stereotype, I don’t swear with my Tourette’s,” he said.

“I talk with my hands as a way of controlling tics, it's a distraction almost. Tourette's can be inconsistent and unpredictable, and supressing tics and displaying them can be equally exhausting.”

When he started at USW, managing this tiredness was difficult for Michael, but the support he had meant he was able to keep on top of his studies.

“I found that the stress of the course found it harder to suppress tics, but I had great support from my doctor and I began to talk more openly about my condition, which I had previously kept quiet. People who knew me put it down to me being high energy,” he said.

“I was given a Monday to Friday placement. I don’t drive, so travelling and holding in the tics can be very tiring, so they understood I may have a little outburst, or may be better working four days a week, so adjustments were made to make it more manageable,” he explained.

“And when I was doing exams, I had a room on my own. This meant I didn’t have to hold back on the tics, so didn’t get as tired, and it didn’t affect other people who were also doing exams.”

Now ready to embark on his career as a graduate, Michael was full of praise for the USW staff who helped him achieve is goal.

“My personal tutor and dissertation supervisor were really helpful,” he said. “I spoke to them about my anxieties and personal worries, and it wasn’t too much trouble for them to give me a massive amount of support.”