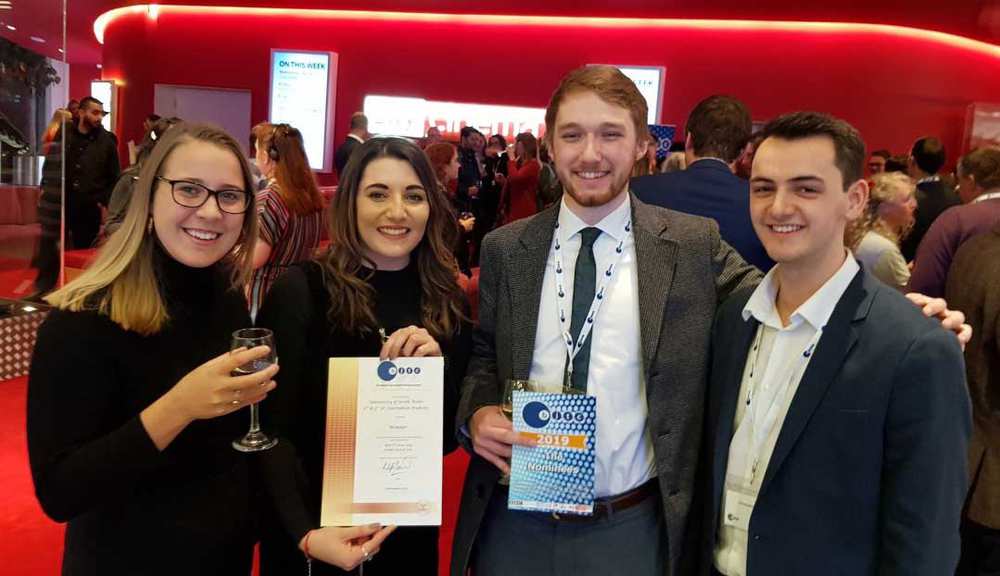 BA Journalism at the University of South Wales has been voted best in the UK for its students’ production of live television news.

The degree course, based at USW’s Cardiff Campus, won an industry award this week for best television news-days from the accrediting body that represents all UK news broadcasters, including BBC, ITV, Sky News and Reuters.

News-days – in which students learn how to produce professional live television news against the clock – are at the heart of USW’s journalism teaching and involve a series of day-long collaborations between year two and three students, producing real multi-media news to demanding deadlines with input and scrutiny from industry professionals.

The award was presented to students at Sky News headquarters in London in November 2019 by Sky news presenter Gillian Joseph, on behalf of the Broadcast Journalism Training Council (BJTC).

Earlier this year, the BJTC renewed USW BA Journalism’s accreditation for a full three years, continuing more than a decade of unbroken industry recognition for the course.

Course leader Craig Hooper said: “Our students always say that news-days are their best, and sometimes toughest, learning experiences and that they help them get jobs out there with the big broadcasters.

“We are delighted that the students’ professionalism has been recognised by the industry. These are great students and graduates who would be a credit to any news organisation and it is a privilege to work with them.

“The award is also a tribute to the support we get from our partners at the BBC, ITV, Global, and Cardiff Local TV who act as guest editors during the news-days and who seek out our students for work experience that helps set them up for media careers.”

“We have just invested in an additional combined industry-standard broadcast studio and newsroom alongside our main television and radio studios, so the future for learning real hands-on journalism at USW is looking better than ever.”