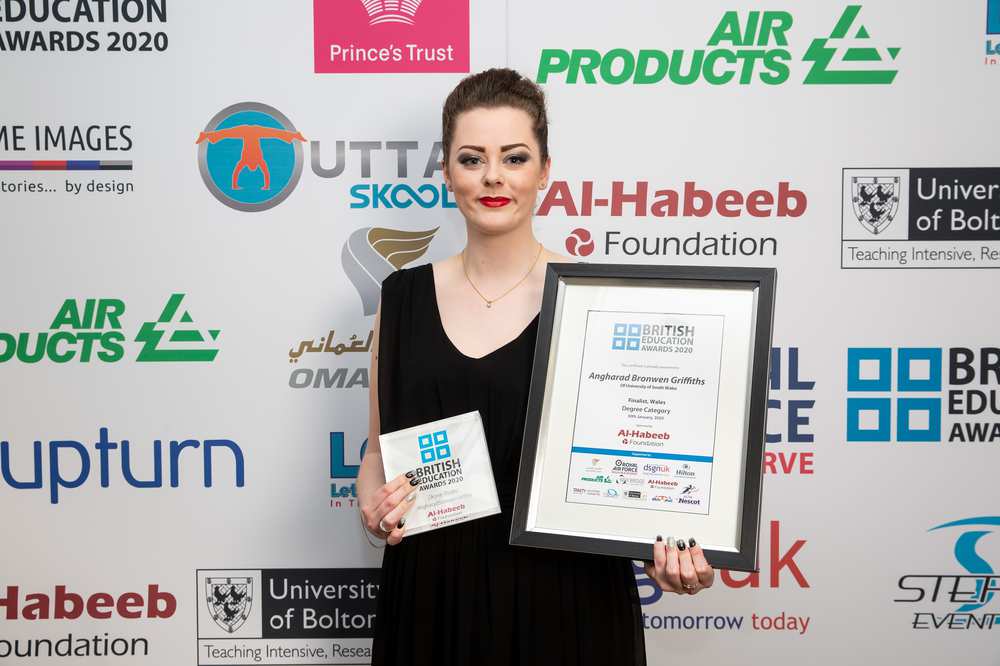 University of South Wales (USW) Masters student Bronnie Griffiths has been named one of the UK’s best at a glittering awards ceremony.

One of seventy finalists in the British Education Awards, Bronnie, 21, won the Wales degree category at last week’s awards. A graduate of USW, Bronnie, from Aberdare, achieved first class in her BA Sport Leadership and Development degree course, and is now studying for a Masters in Sport Leadership.

Now in its fourth year, the British Education Awards recognise the outstanding academic and extracurricular achievements of students across six award categories including GCSE or Scottish National 5, A Level or Scottish Advanced Higher, Vocational, Degree and Degree Apprenticeship.

Twenty winners were presented with a trophy by an array of politicians, leading education professionals and celebrities from the world of sport and television.

Five nominees received Special Achievement awards. These pay special tribute to students who have overcome particularly challenging circumstances and personal difficulties during their education, making their accomplishments all the more remarkable. Four awards were also given to Degree Apprenticeship students.

The level of discipline required from all BEA 2020 Finalists in order to achieve their top grades was put into sharp focus when taken in context alongside their extensive extracurricular responsibilities. These ranged from membership of the Girl Guides and RAF Cadets and volunteering within the community, to participation in the Duke of Edinburgh Awards and numerous drama, music and sporting commitments.

Finalists also stood out for the extra measures they taken to advance their learning, frequently undertaking additional study and summer work placements to achieve their goals. They also impressed judges with their dedication to mentoring and supporting fellow students and younger pupils through peer study groups, after school clubs and societies.