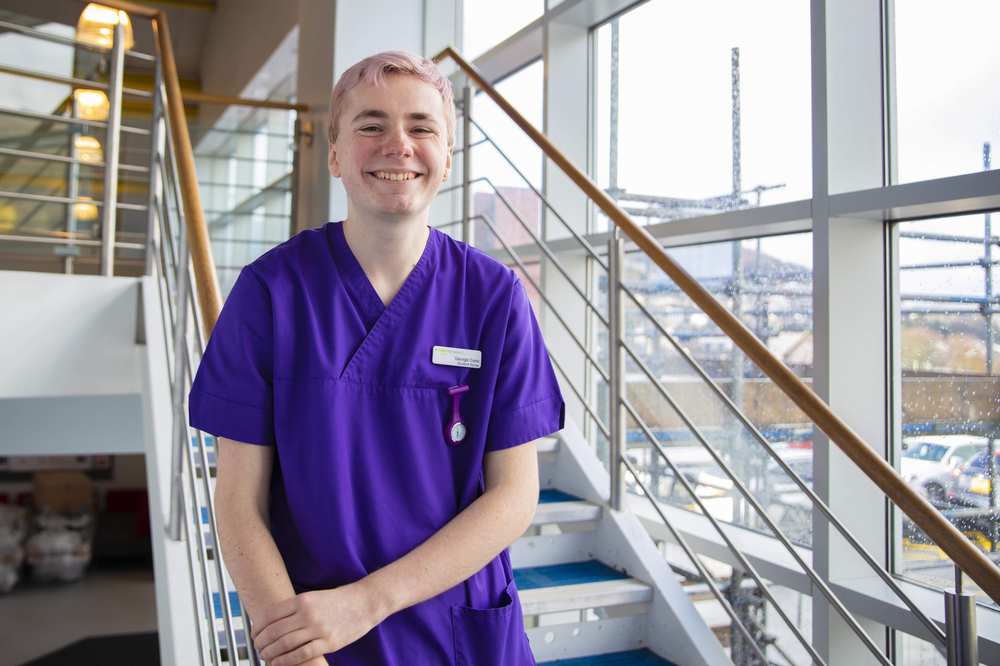 George Cade has started his nursing career in one of the most unprecedented years in NHS history – but says that working through the coronavirus pandemic has been an ‘amazing’ experience.

The 21-year-old, from Melksham, Wiltshire, is about to graduate from the University of South Wales (USW) with a first class honours degree in Nursing.

After a work placement in the Intensive Care Unit (ICU) at the Royal Glamorgan Hospital in Llantrisant during his second year, George was asked to return as a healthcare support worker.

“I loved my placement there. It was the most amazing six weeks,” he said.

“I got on really well with the team, and was pleased to be able to carry on working at RGH while studying.

“Then in February this year, when we heard that coronavirus had hit the UK, I contacted ICU directly and offered my services as either a student nurse or a healthcare assistant, which they took me up on.

“We were bracing ourselves. There was a calm before the storm and the wards were empty.”

George was one of many second and third year Nursing students at USW who had their course structure changed so that they were able to assist the NHS during the first wave of Covid-19.

From March until April, George worked as a healthcare assistant, acting as a runner between the High Dependency Unit and ICU, ensuring there was enough PPE in stock and assisting with putting on the PPE, while being trained on clinical skills.

“In the peak of the first wave, I started in ICU as a student nurse. We would wear full PPE for over 3.5 hours at a time, take a break, and then repeat for the 12.5 hour shift,” he added.

“It was really tough. The PPE would make your nose sore and it was uncomfortably hot, with so many machines generating so much heat. The air conditioning had to be switched off so that it didn’t spread the virus. We were dehydrated and the visors were tight on our heads.

“Each Covid patient would need constant monitoring. We ended up taking up another unit with ICU beds. It was a huge learning curve for me. At the start, I felt so out of my depth, but the staff were amazing. I wanted to help and put my training to use.

“A highlight for me was supporting an ICU patient all the way through his stay. I comforted him when he was intubated, looked after him through his treatment and subsequent recovery. I was there when his breathing tube was removed and on the day he was discharged. This meant a lot to me.”

George was still studying when the pandemic hit, with his dissertation left to submit.

He said: “I chose not to extend the deadline as I had worked on it throughout the year. Fortuitously, I wrote it on looking after patients’ oral care while they are intubated.

Since qualifying as a nurse, George has been working in the University Hospital of Wales' General Intensive Care Unit.

“When I started researching universities, USW’s high rating of 97% in the National Student Survey stood out against the other Nursing courses,” he added.

“I attended an open day and I was blown away by how approachable everyone was – there was a real family atmosphere.

“I have enjoyed my time at USW but it has been challenging. Nursing is like no other degree; we work long hours during placements as well as bank shifts as a healthcare worker. I have worked in 40 different wards or units throughout my degree, to ensure I gained as much experience as possible. But I’ll never forget the support I received from the wonderful ICU team at Royal Glamorgan.”