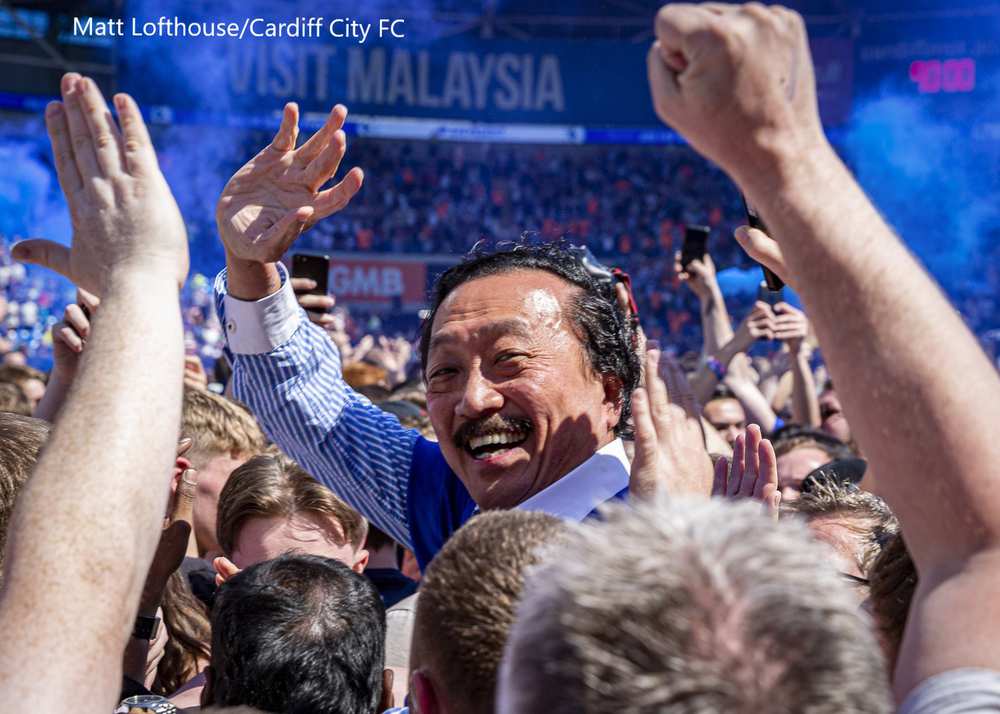 IT’S an iconic image of Cardiff City owner Vincent Tan that sums up the euphoria among Bluebirds fans celebrating the club’s promotion to the Premier League in 2018.

It shows the unbridled joy of the chairman as he celebrates with thousands of City followers looking forward to seeing their side face some of the best football teams on the planet.

And for the photographer behind the image, 26-year-old Matt Lofthouse, it’s one of the highlights of his three years of studying for his degree in Photojournalism at the University of South Wales’ (USW) Cardiff Campus, for which he has received First Class Honours.

Now an accomplished photographer and videographer, capturing the image of Tan – and being nominated in the  Photographer of the Year category at the Wales Media Awards earlier this year – rank among Matt’s best moments during his time in Cardiff.

For Matt, who is rom Stalybridge near Manchester, the journey towards a degree, and now a job working for Newcastle Upon Tyne-based North News and Pictures, is the culmination of many years of challenges, not least those presented by Asperger's syndrome.

After he originally attended mainstream school, Matt found himself facing a number of difficulties.

“I was misunderstood and bullied, and I often didn’t just walk away. I’d react to the bullies, which wasn’t the best way to handle the situation,” he said.

“Eventually I transferred to a school that managed children who needed more support, who had things like ADHD, cerebral palsy, dyspraxia, and that really made a difference. They understood my Asperger’s and helped me really find my feet. I was lucky to get that opportunity.”

Despite the positive side of the school move, Matt struggled with the change, not least the loss of friends, which impacted on his mental health. Unwilling to take antidepressants to deal with the issue, he started looking for hobbies to keep himself busy, and followed the advice of a friend who suggested he take up playing rugby.

It was a decision that had a major impact on his future.

“I went a few times and, after a few false starts caused by my anxiety, eventually started playing regularly. It did me the world of good both physically and mentally,” he explained.

“I was really enjoying it. At the club’s end of the year awards, I was given the Most Improved Player and Inspiration Player of the Year awards for my commitment, weight loss and improvement in skill. It was a great feeling and I’d say I’ve been on the up ever since.

“Unfortunately, however, I got an injury in a scrum that meant I couldn’t carry on playing, but I didn’t want to stop being involved with the club and from there started taking pictures. I’d always been interested in photography, but now had a subject which I could really focus on.”

With a new-found love for taking pictures, Matt enrolled on courses at a local college to get the qualifications needed to get a place at university, settling on USW as his chosen destination.

“There’s only about five or six courses in photojournalism across the UK, and I went to look at them all,” he said.

“USW was just so different, it really sucked me in. Cardiff has such a buzz about it, and being so close to the centre of the city was perfect.

“The course has given me a chance to have so many different experiences, from doing sport pictures, the Elvis Festival in Porthcawl, more traditional news images, and video news, there’s just so much opportunity in the city to find the stories that people are really interested in.”

Now heading off to Newcastle to start his career in photography, Matt will be taking with him many memories of his time in South Wales, not least his image of Vincent Tan that captured the delight of thousands of football Cardiff City fans.

“Having the opportunity to work at Cardiff City and to be able to be there at that moment was an incredible experience. I’m so grateful that I could be involved in that, it means there’ll always be a piece of my heart in Wales,” he said.

Graduation Tales: From Poland to policing, Ela’s lengthy journey to a top-class degree

University alliance to deliver economic and social benefits to Wales