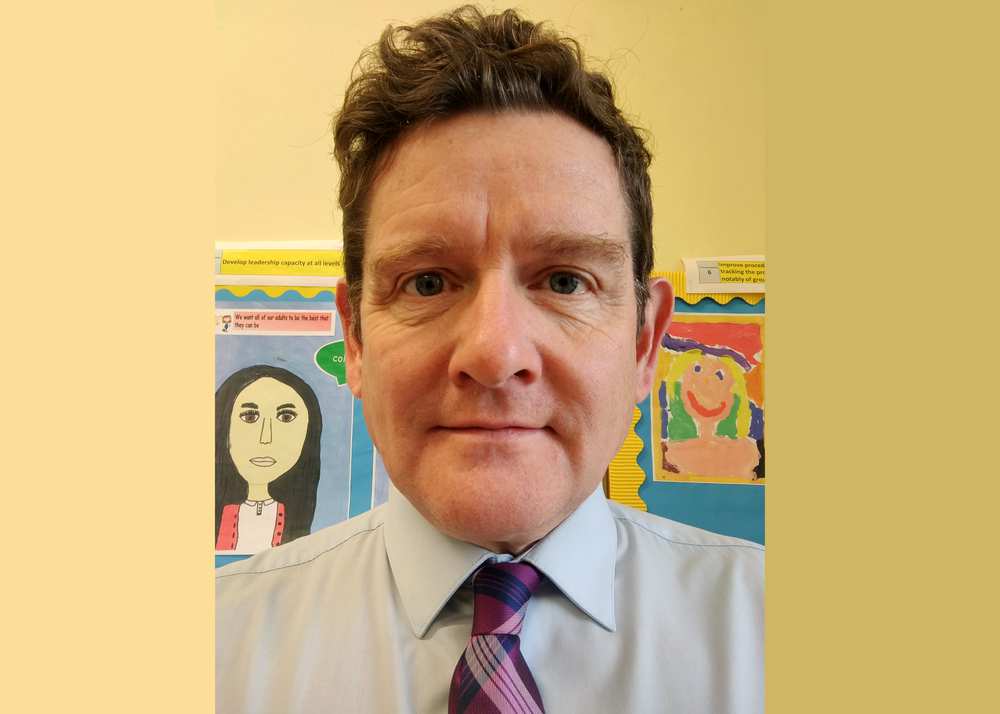 Headteacher Joe Cudd is graduating from the University of South Wales (USW) with a Doctorate in Business Administration (DBA) – something he has always wanted to do – after a tough nine years of studying.

As leader of Ysgol Pen Rhos, dual-stream primary school in Seaside, Llanelli, which opened in 2018, Joe had the mammoth task of bringing two teams together to work as one. The new £10m school was built as a result of the amalgamation of the former Lakefield Primary and Copperworks Primary Schools, and its dual-stream status means that both Welsh-medium and English-medium teaching exist side by side, with children placed in either the English or the Welsh stream.

After graduating from the MBA (Masters of Business Administration) earlier in his career, Joe was one of the only class teachers in Wales with that qualification, which opened up opportunities for him to apply for headteacher roles. He has now been a headteacher for 12 years, and decided to study the DBA so that he could gain the highest level qualification possible – and despite having to suspend his studies three times, he has finally achieved it.

“I honestly didn’t realise how demanding a doctorate would be,” said Joe.

“I didn’t do very well in my first degree – I spent too much time mucking about – so I suppose I’ve been trying to rectify that ever since. I said to my tutor when I left university that I was going to get a doctorate, and that was a personal motivator for me throughout the course.

“It hasn’t been easy; the first time I suspended my studies was due to breaking both of my arms, the second time was when I moved from my previous job to this one, and the third was when my son was at university and became ill. I remember at the beginning of the course, someone said ‘life gets in the way’, and that has certainly been true. But I’m so glad I kept going. I’m looking forward to attending a Graduation ceremony, wearing the cap and gown and putting the certificate up on my wall!”

Joe has been able to apply what he has learned from the DBA in his everyday work, including studying optimistic behaviours and collective beliefs, building trust in schools and how to make sure schools perform efficiently.

“When I mixed up 68 people, I was transparent about what I was going to do, explaining why we need to go from where we were to where we are now,” said Joe, who is an associate of the National Academy of Educational Leadership, working with Welsh Government and academics to promote change across the education system.

“I’ve applied the same research at the other school I’m working with, which is in special measures. I’ve integrated a group of people into my work and apply the same tools, and that’s working well. The organizational behavioural work I’ve done has been really powerful in schools.

“I’ve also learned so many new skills during the DBA, such as SPSS (Statistical Package for the Social Sciences) software which is used to interpret complex statistical data, and thematic analysis, which is a method of analysing quantative data such as interview transcripts.

“I now ask far more questions in my job, such as where the evidence is behind something, or what the theoretical framework is for a project, so that things aren’t just being done for the sake of it.

“I can’t thank my tutors – Dr Simon Thomas and Prof Catherine Farrell – enough for all their support and belief in me throughout.

“Schools have had such a tough time during the pandemic, but we have learned an awful lot about how people work together. It’s refreshing to be able to look at the relational aspect of schools; understanding how people think and feel, how you can build relationships, repair broken relationships, build hope and optimism in a school. We need that now, more than ever, to be able to change things for the better.”

Find out more about postgraduate study at USW.