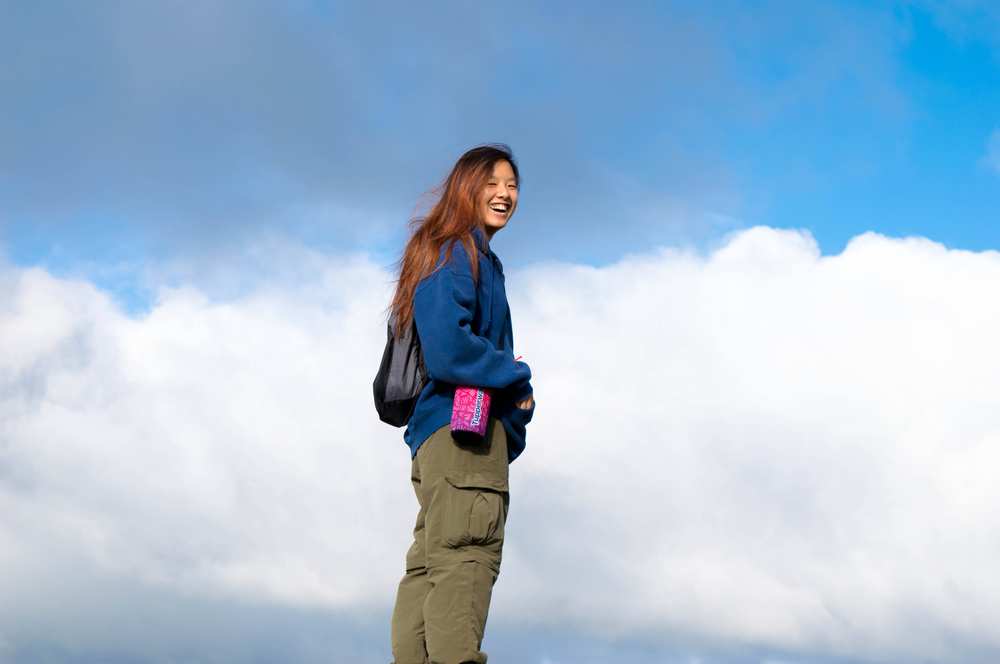 Jia Wei Lee isn’t afraid to admit that they lacked confidence as a teenager, and experienced social anxiety and found expressing themself in public a challenge.

Now, however, things have changed dramatically for the 25-year-old, who is about to embark on the Future Generations Leadership Academy, a partnership programme led by the Future Generations Commissioner for Wales, Sophie Howe, in a development Jia Wei puts down very strongly to their years studying at, and working for, the University of South Wales (USW).

Originally from Malaysia, where they studied the equivalent of A-levels in chemistry, biology and maths, Jia Wei moved to Wales in 2017 to study for a BSc degree in International Wildlife Biology at USW, gaining first-class honours in 2020.

However, completing their studies in the middle of the pandemic – ‘I was a Covid graduate,’ they said – Jia Wei faced challenges when emerging into a difficult jobs market.

“After I finished studying it was like a flurry of trying to find a job in the UK, so it was just applying for a lot of things at the same time,” they said. “I had my initial plans, but Covid threw it off.”

After months of job searching, Jia Wei discovered the USW Springboard Graduate Internship - Class of 2020 programme, which offered specific roles across the University to a number of alumni.

Having secured a place on the programme within the USW Careers team, Jia Wei’s job search experience stood them in good stead, as did the skills they’d honed while a USW undergraduate.

“Although I did my degree in International Wildlife Biology, while I was at USW I was involved in a lot of projects that helped me improve my skills on social media,” Jia Wei said.

“From the start of my time at USW I was one the University’s student bloggers, who prepare videos and social media posts that give an insight into what it’s like at USW. I was also involved with the social media for USW International, introducing the University to people from across the world, and helped with the training of student mentors.

“As well as that, I helped at the Meeting House, which is run by The Chaplaincy at USW, volunteering there during events such as Ramadan and Christmas.”

These experiences gave Jia Wei a detailed understanding of the power of social media, which became of huge interest to them during their third year of study, and helped with their internship.

“When I started with the Careers team in October 2020 I was given a challenge to help graduates just like me who were looking to secure jobs, as I knew about those difficulties first-hand,” they said.

“So I set about reaching out to those who we couldn’t meet face to face, and seeing how I could get information to them. Working with the USW Alumni team and International department, we set up a LinkedIn support group to bring people together, and sent out regular newsletters to tell them what help and advice we could offer.

“Under the #USWClassof2020 hashtag, we brought about 300 people together and gave them careers advice, links to potential jobs, and other resources.”

Having impressed during their time as an intern at USW, Jia Wei was offered a permanent role, which they still carries out, in the University’s Student Enterprise team as engagement co-ordinator, supporting communications through social media and the USW website.

And, not one to take it easy, they also runs a social media business out of USW’s Cardiff Campus-based Startup Stwidio, the first dedicated graduate incubator in Wales.

The business, called MAZI – which is run by Jia Wei and business partner Mia Zhang, who is a USW MBA graduate – is supporting small business and individuals to make bitesize videos which showcase their products and services, through its own brand and The Welsh Collective feeds.

Not content with their current roles, however, Jia Wei was keen to improve their face-to-face communication skills, and saw the Future Generations Leadership Academy, which they heard about through USW, as the perfect way to enhance their abilities.

“When I saw the details on the Future Generations website I realised it was is something that I really want to do,” Jia Wei said.

“I always want to use my voice as like a platform to really campaign for subjects like social justice, equality, and the many minority communities out there, and wanted to get more skills to be able to do that, so I applied and was really grateful to be chosen.”

As part of the Academy programme, which is part sponsored by USW and runs until next June, Jia Wei will join around 30 participants aged between 18 and 30 on seven modules, which last around 70 hours in total. They include Practical Workshops, Reverse mentoring, Individual Well-being of Future Generations Action Plans, How Wales Works, Understanding the Well-Being of Future Generations Act, Leadership in Action, and a Young Leaders Summit next June.

Jia Wei is following in the footsteps of Mishan Wickremasinghe, a former President of the USW Students’ Union, who took part in the 2019-2020 Academy.

Looking ahead to the programme, Jia Wei has a good idea of what they wants to get out of the experience.

“I'm much better at kind of communicating in an article or blog post, or through pictures and graphics and design,” they said.

“I want to transfer all of that into more of a physical presence so I can really educate and empower people, and to help end a number of stigmas. I want to know how to network with people, to talk to them, and to get those in-person skills.

“This isn’t something I’ve been too good at before. In high school, I was a big stutterer and I would go blank and have mind fog, and had a very big social anxiety thing. I’ve come a long way from there, and this will help me more.

“The things I’ve done at USW have also helped a lot with that, it’s played a big part - the volunteering in different places and meeting different people really pushed me out of the comfort zone, and this will really help me to grow further.”

Mark Cadwallader, Director of Strategy and Development at USW, said: “Supporting the Future Generations Act, the first of its kind in the world, and being involved with the Future Generations Commissioner, the first post of its kind in the world, fits in very strongly with USW’s forward-looking 2030 Strategy, which focuses directly on the positive impact we can have on the communities we serve.

“Mish’s involvement in the first cohort of the programme highlighted the fantastic experiences those involved in the Academy can have, which he was able to make the most of.

“That progressive experience confirmed to us that we should continue to encourage involvement in the programme, and committed resources to this latest cohort, in which Jia Wei will play an important role.

“Jia Wei’s experience as a USW student, graduate intern, staff member, and entrepreneur, will bring benefits for not just them, but also USW, as both look to build strong partnerships for the future.”