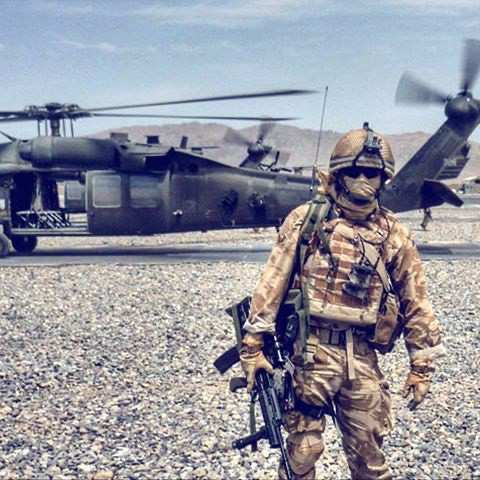 David Jones (37), from Pontypridd, has served on the frontline in both Iraq and Afghanistan but is now studying his final year BA (Hons) Photography at University of South Wales (USW), and has set up his own studio.

In the twenty years since leaving school at 16, with a handful of GCSEs, David has seen action that most of us will never see the likes of, but this has caused him physical and mental repercussions. He said:

“I always wanted to join the Armed Forces. Every generation in my family has been in the forces. It has been bred into me.

“I started out in the Royal Air Force, which took me all over the world. Two years in, I was blown up in Iraq. A member of my unit stood on an IED and was killed right in front of me. I had shrapnel in my stomach and a ruptured spleen. I was injured in Fallujah but woke up in Birmingham. After six months recovery, I was posted back to my squadron in RAF Honnington.

“In 2007, I transitioned to the Army (Royal Welsh) and did three tours of Afghanistan back-to-back. There, I stood on a detonator myself but wasn’t as badly injured. I took gun shots in my body armour and helmet – I was knocked out for 20 minutes.

“After a stint in Canada, I did another tour of Afghanistan in 2011 but I was medically discharged. As you can imagine, I have lots of scarring as well as arthritis in my knees, ankles, and hips.”

Though struggling with post-traumatic stress disorder (PTSD) to this day, the first three years after returning from service were the worst for David and he tried to take his own life. He found support through Woody’s Lodge, an Armed Forces network:

“I volunteer at Woody’s Lodge now where I have made friends for life. I am an only child, but I have plenty of brothers and sisters. We have got a strong bond” he said.

“I started worked as a landscaper but one day I found my shed had been broken into and all my tools had been stolen. With the little bit of money, I had left, I bought myself a camera.

“I started studying photography and opened a studio in Pontypridd called ‘Just Shoot Me’. We specialise in dog photography, but we also cover family portraits, hexagon portraits, landscapes, and commercial photography.”

Drawing on his own experiences, David is focussing his final project on male domestic abuse. He said:

“The lecturers at USW have been really supportive and encouraging. I am going to study for a PGCE course next. I want to teach photography at higher education level.

“I would encourage anyone who is thinking of changing their career path to just go for it. You only live once.”

The importance, to USW, of providing support for ex-Armed Forces personnel was first cemented in 2013, by the signing of the AF Covenant, and further enhanced when Ross Hall, Armed Forces veteran, was appointed as USW’s Armed Forces Champion.

USW established the Armed Forces Recognition of Prior Learning Scheme in 2015. Through this, Ross was able to ensure that Armed Forces leavers and their families were given the right guidance on the education opportunities available to them.

USW is also the only university in Wales to be working in a formal partnership with the Service Children’s Progression (SCiP) Alliance. Offering various teaching degrees, USW ensures that their student teachers enter the profession aware of, and ready to support children of Service personnel in the classroom.

Welsh Language Rights Day: celebrating the 'transformation’ in the experiences of Welsh speakers