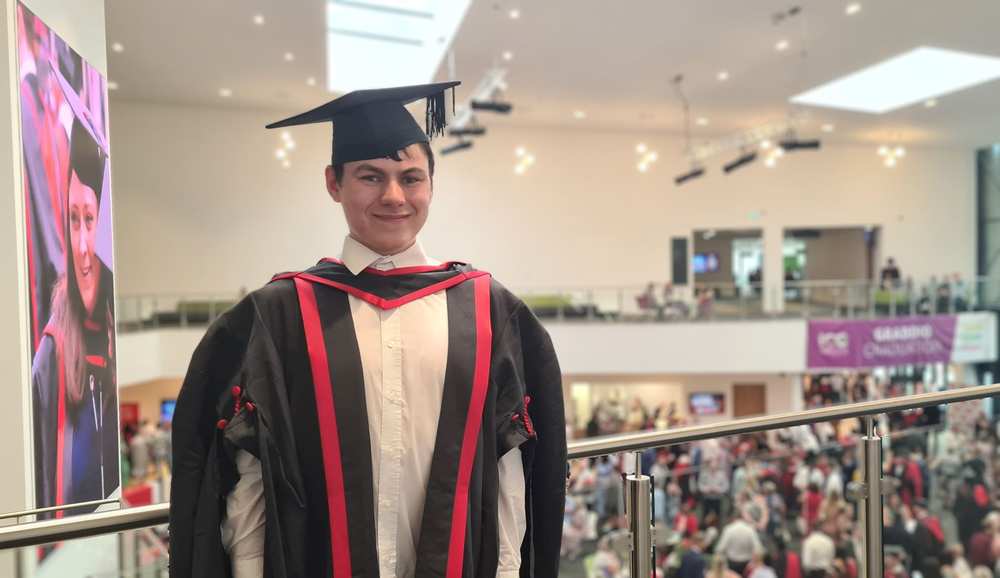 Callum Jordan, from Rotherham, is graduating from University of South Wales (USW) this week with first-class honours from BSc (Hons) Community Football Coaching and Administration, despite facing many challenges along the way.

Callum was encouraged by his family to continue his studies after school and apply for the Foundation Degree Community Football Coaching and Development, based at Rotherham United. Having been diagnosed with autism and asperger’s syndrome at age four, he lacked confidence in himself and his abilities. He said: “I don’t believe in myself enough, but my family often remind me how clever I am. I have had a great time on the course at the college at Rotherham United and really enjoyed the residential visits to USW’s sports park, which my Mum was able to come along to as well to support me”.

With his Dad, uncle and brother all being keen footballers, Callum has followed in their footsteps and played for various football teams since he was seven years old. He plays in the position of goalkeeper.

“My favourite part of being a goalkeeper is saving goals, but it also gives me some space as I don’t really like crowds. When I go onto the pitch, I go into my own zone,” he said.

Callum’s ambition is to continue to coach football to young people with disabilities. Since 2019, he has been coaching at Rotherham United Ability Counts, an open access football provision for young disabled people. He has also coached goalkeepers and outfield players with various disabilities, helping them to grow their confidence and progress in disability football.

He also plans to progress even further and study the MSc Advanced Performance Football Coaching.

Callum has obsessive-compulsive disorder (OCD) and has been diagnosed with an eating disorder. He said: “I try to power through. I have my routine. Every day I set up my laptop and books and get to my studies. I have amazing support from my family.”

When asked if he had any advice for people with learning disabilities who want to go to university, Callum said: “Believe in yourself and ask for advice. I have always been independent and reluctant to ask for advice, but it is important to and that really helped to build my confidence.

“It has been challenging but I am very proud of myself, and I know that my family are proud of me too”.

Robyn Pinder, Course Leader in Football Coaching, said: ““It’s been a pleasure supporting Callum throughout his undergraduate degree. I’ve no doubt that Callum will go on to achieve his ambition of being a disability football coach and believe he’s a fantastic role model.

“We’re extremely proud of all he’s achieved over the last three years and we’re looking forward to welcoming him back to USW to complete the MSc. Callum is a conscientious, diligent, and determined student so I am certain he’ll thrive during his postgraduate study.”