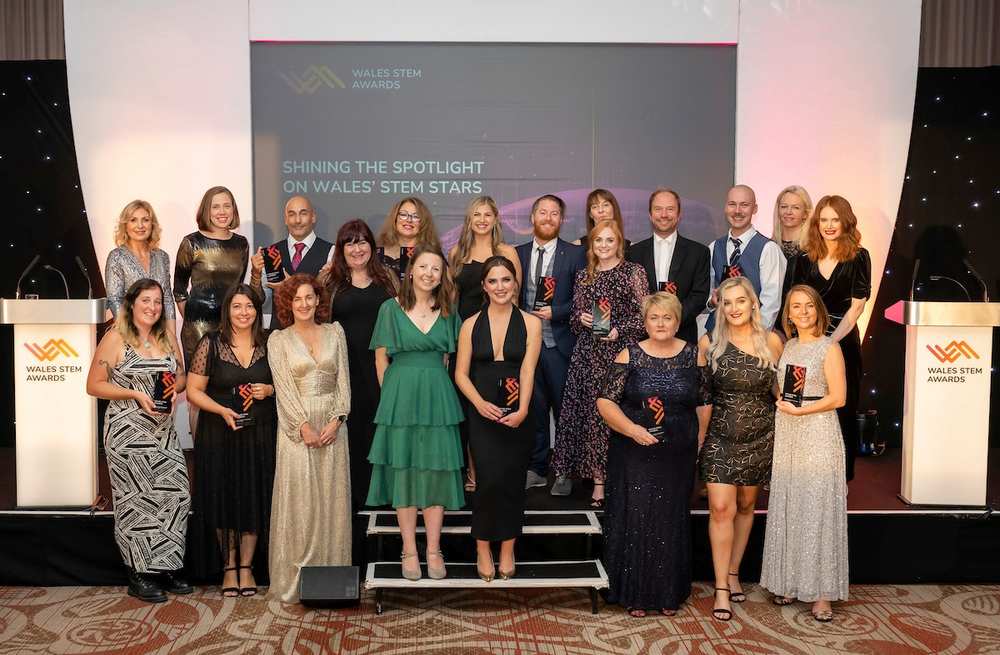 A lecturer and inspiring student led the way for the University of South Wales (USW) at the Wales STEM Awards, both scooping honours at the event.

Sharan Johnstone, USW’s Head of Cyber Security, was named STEM Woman of the Year, while USW student Charlotte Lewis – who is studying for a degree in medicinal biological chemistry and also works as a research scientist for Merthyr-based Simbec-Orion Group – won the STEM Rising Star of the Year category.

In the Innovation in STEM Award, Llusern Scientific Limited – which was set up by USW academics Dr Jeroen Nieuwland, Dr Emma Hayhurst, and Dr Ali Roula – took the honours, while USW was highly commended in the STEM Educational Programme of the Year (Public Sector).

After receiving the award Mrs Johnstone said: “I am incredibly proud to receive the STEM Woman of the Year award 2022. It is an absolute privilege to play a part in developing graduates with STEM knowledge that will directly aid organisations in Wales and the wider UK and inspire our future generations of STEM talent.

“Huge congratulations also go to my fellow nominees, whose contributions to STEM are outstanding.”

Miss Lewis, 23, said of her award: “This has got to be the best end to the best first year in industry anyone could have ever asked for.

“I've had so many people support me and they've given me so many great opportunities, and being nominated was enough in itself, let alone winning. I'm in complete shock.

“You don't think that people could achieve so much early on, particularly as it can be really hard to get into the STEM industry, but it’s been recognised that I've been able to make a difference.”

Dr Nieuwland said: “Llusern Scientific is delighted to have been awarded the Innovation Award at the STEM Wales Awards. We didn’t set the business up to win trophies but it is always nice to get recognition for the work we’re doing to improve access to affordable, accurate healthcare diagnostics for people in Wales, the UK and around the world.

“This Award comes at a pivotal time for the business as we prepare to launch our first product – a panel of assays for diagnosing UTIs in veterinary medicine. We are also well on the way to being able to sell a UTI kit for use in human medicine in 2023.”

The ceremony saw finalists from across all parts of Wales compete for 12 awards in a variety of categories, ranging from STEM Start-Up of the Year to Innovation in STEM. Hosted by broadcaster Sian Lloyd, the awards ceremony, which took place at Cardiff’s Mercure Hotel, recognised the innovative STEM work being undertaken in Wales, addressing the diversity gap and skills shortage, and inspiring and raising the aspirations of the next generation.

Pontypool-born Eben Upton, founder and CEO of Raspberry Pi, was also recognised at the event. The founder of the small single-board computer, which is manufactured in SONY UK TEC and has sold close to 50 million devices worldwide, was announced winner of the Outstanding Contribution to STEM award.

Head judge Dr Louise Bright, USW Director of Research and Business Engagement and founder of the Wales Women in STEM initiative, said: “We would like to offer a huge congratulations to all of the winners of this year’s Wales STEM Awards. The winners represent some of the most progressive organisations and individuals at the forefront of STEM innovation in Wales.

“The calibre of the businesses and individuals shortlisted for the awards was second to none and I’d like to congratulate all finalists. The awards show that the future of the STEM sector in Wales is bright and we look forward to the industry going from strength to strength.”