As part of International Nurses Day 2022, we’ve spoken to Kelly Howell, a University of South Wales (USW) nursing graduate, about continuing her studies after a shock diagnosis. 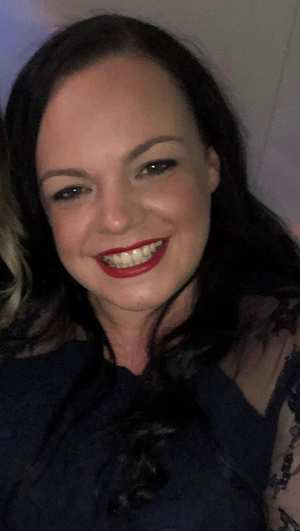 Over Christmas 2018, Kelly Howell from Bridgend, discovered a lump in her breast. She was studying to qualify as a Health Visitor at USW and was approaching the final leg of the course.

Kelly was referred as an urgent case and, within a fortnight, had met her oncologist who diagnosed HER2 triple positive breast cancer - a very aggressive form so she needed to start treatment immediately, much to her and her family’s concern. She said:

“I was in active treatment for all of 2019, so I had to pause my studies. Chemotherapy shrunk the tumour enough so that I could have a lumpectomy, which was followed by radiotherapy.

“The treatment worked. I am thankfully in remission and was able to return to USW in January 2020. However, I had lost my confidence. I had lost all my hair, so I didn’t look the same and nor did I feel the same. I still have shortness of breath, fatigue, and other side effects.

“If it hadn’t been for my lecturer, Michelle Thomas, and Debbie Lewis, Health Visitor Practice Teacher, I am not sure I would have returned. They were so incredibly supportive, even when I had paused my studies, they still checked in on me.”

Already a qualified adult nurse, Kelly had wanted to be a Health Visitor for some time. A mum of four daughters, she was inspired by those who offered her support when her children were born.

“Midwifery and Health Visitor services often don’t get the recognition they deserve for the incredible work that they do. I feel so lucky to have had some significant people to aspire to,” she said.

“I absolutely love my job. I get to meet lots of families in the community. It can be a challenging case load but so worth it. Being able to support vulnerable families, you can really help and really make a difference. We have so many services that we can signpost families to such as, mental health, speech and language, audiology, physiotherapy etc. Safeguarding is a large part of our role too. It is rewarding when vulnerable families progress and are no longer a safeguarding risk.”

During her studies, Kelly was nominated for and won the Queen’s Nursing Institute, Dora Roylance Award for ‘Outstanding Achievements as a Student Health Visitor.

Kelly graduated from the MSc Specialist Community Public Health Nursing- Health Visiting, finally crossing the stage in her cap and gown this year at the International Convention Centre in Newport. She said:

“I felt so lucky and proud to cross the stage and celebrate my achievement, none of which I could have done without the support of my friends and family.”

Michelle Thomas, Course Leader, said: “When Kelly attended for interview for the SCPHN programme she lit up the room with her enthusiasm for the health visitor role. When she became unwell, we were devastated for her and we were delighted that Kelly was able to return to complete her studies and we look forward to working with Kelly in the future when she supports future students.”

Exploring the impact of climate change through art