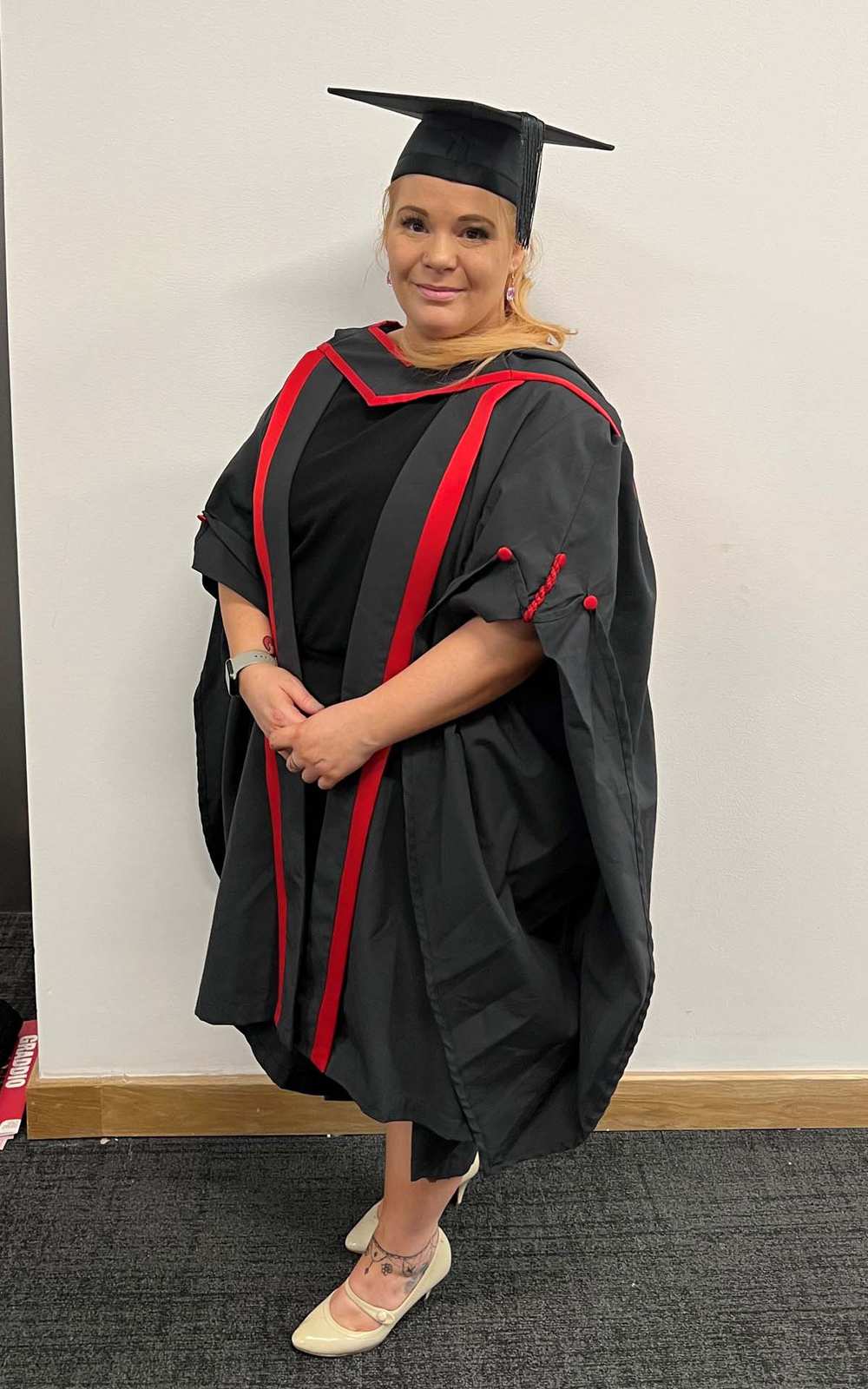 To mark International Nurses Day (Thursday 12 May), we’ve spoken to University of South Wales (USW) graduate Victoria, who followed her heart and retrained as a Learning Disability Nurse.

Victoria Gibson, 36, from Blaenavon, trained as a classical singer from a young age and moved to London to study music and education before falling pregnant with her daughter. She said:

“I've always been into singing, and when I was younger it was what I really wanted to do. My nan and my mum paid for me to have classical training from the age of 14. When it came to going to university, I didn’t want to do anything else. I got serious about my singing career, and then I fell pregnant, which took me in a different route.”

After having her daughter, Victoria went on to work as a support worker for people with learning disabilities, where she realised that there was more she wanted to do to help people. With the support of her family, she visited an Open Day at USW to find out more about the nursing courses.

“I thought that I’d maybe start studying in a year’s time. I got to the Open Day, loved it, had an interview, and I started about a month later! So, what was originally supposed to be an 18-month goal changed in a couple of weeks. That was where my whole journey started, really.”

For Victoria, it felt like Learning Disability Nursing was a natural fit with her skillset.

“At the Open Day I spoke to the lecturers about my skills in augmented communication, which is replacing speech or writing for those with impairments. I definitely still wanted to work with people with learning disabilities - it's such a privilege,” she said.

During her first year of study, Victoria attended conferences and contributed to We Student Nurses on Twitter, a network which provides support and guidance to others in the field. However, everything changed overnight when the pandemic hit in March 2020.

“When Covid-19 came it was lonely, because when you’re doing a nursing course you want to be face-to-face, you want to be helping people, and instead you were sat behind a computer screen. You've got your peers who you can talk to on the phone, but it's not the same. But I think as tough as it was, it made us better nurses.”

During this time, Victoria was assigned a placement working as a community nurse, and she surprised herself by enjoying it more than she thought she would.

“I originally thought community nursing wasn’t for me. But then I thought I’d try it again, and I absolutely fell in love with it.”

Despite that, the pandemic presented new challenges when it came to caring for her patients.

“There were points where I was sitting in a garden in the rain with an umbrella over my head and my patients were sat in their hallway chatting to me through a window. But it was important to look out for their mental health, and make sure that their family were doing ok too,” Victoria said.

“I was doing eighty-hour weeks some weeks. I also trained to do vaccinations, and I wrote my dissertation whenever I had a spare moment.”

Victoria went on to complete her studies in 2021 and officially graduated from USW at a graduation ceremony in March 2022. She now works in a community team in Bridgend caring for people with learning disabilities.

“I’ve been in post six months now, and I am really enjoying it! Learning Disability Nursing is such a small field, and if you need anything, it doesn't matter what health board you work in, people will help you. Community nursing was definitely the route that I needed to go down - the best thing I did was get out of my comfort zone.”

Victoria recommends that other people take the leap and change careers if it’s an area they’re passionate about.

“If you're interested in something, do some research, and find out if it’s definitely for you. You have to have support behind you – if I hadn’t, I wouldn't be where I am now. But if it is meant to be then it will be. Go for it!”

In the future, Victoria hopes to continue the work she’s doing, and is also considering undertaking a Master’s course in palliative care.

“I’ve done a lot of work around palliative care, and my whole dissertation was on advance care planning. But we can make our own routes in Learning Disability Nursing as there are lots of areas which aren’t equitable for people with learning disabilities, so it's always going to be a positive thing to have a Learning Disability Nurse within a certain area,” she said.

However, Victoria has no regrets about the path she has taken to get to where she is now in her career.

“It’s been a massive journey, and looking back, if I had gone into nursing at eighteen, I don’t think I would have personally been ready. I needed to go through everything else before I got to where I am now. It’s not wasted time because it’s prepared me for where I was going. I love my job; it is the best thing I ever did. Things are meant to happen for a reason.”

Exploring the impact of climate change through art