Historian professor Maddy Gray’s research on pilgrimage in medieval Wales has directly informed the Welsh Government’s policy on tourism. Her work has highlighted the potential of pilgrimage routes to attract visitors to Wales and to generate sustainable economic benefits in disadvantaged areas.

Gray has been the driving force behind the Cistercian Way, a long-distance footpath linking monastic sites in Wales, inaugurated in 2016. Designed in conjunction with The Ramblers, and with sponsorship from Visit Wales, the Cistercian Way dovetails with the Welsh Government’s Faith Tourism Action Plan (2013), which Gray helped draft.

Maddy Gray’s research has explored the key role of the Cistercian Order in the development of the Welsh landscape. Fifteen Cistercian houses were established in medieval Wales, the first of them in the 1130s. They were to have profound spiritual, political, and material effects.

The Cistercians enjoyed the patronage of the Welsh princes, who bestowed lands on the order and sponsored the building of churches and monasteries. The Cistercians, for their part, were a force for economic change, not only through introducing new agricultural practices but by attracting and caring for pilgrims. The relics held at Cistercian houses, together with shrines and holy wells elsewhere in Wales, contributed to a strong sense of Welsh identity in the Middle Ages.

Tapping into that sense of identity today and enticing more visitors to monastic sites and sacred places, can be an unexpected path to economic regeneration. 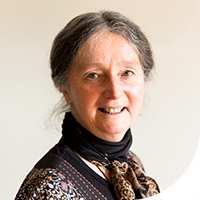