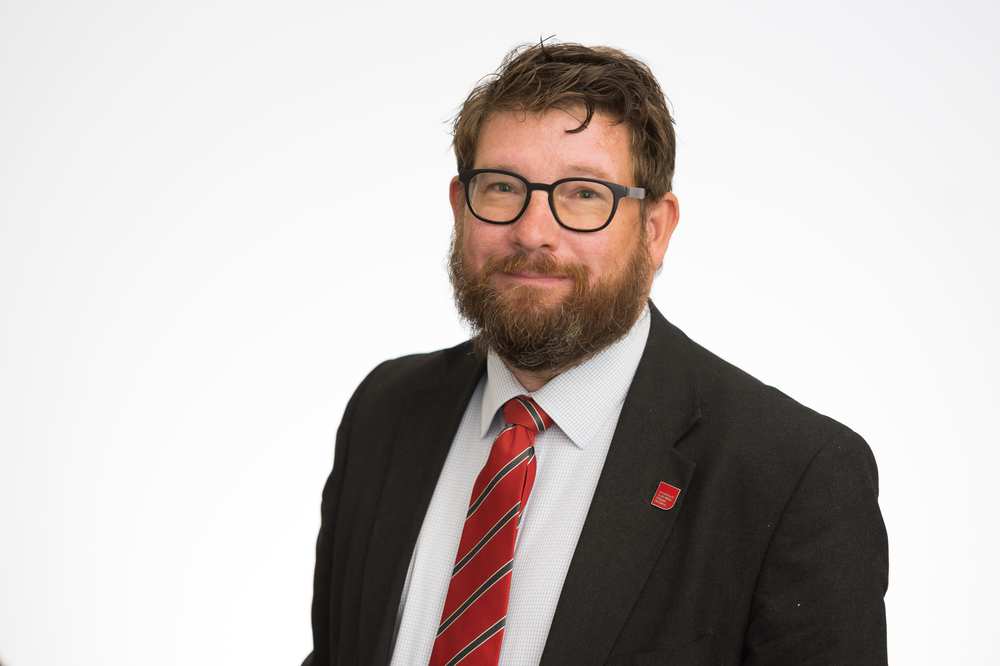 To mark International Nurses’ Day (Thursday 12 May) we speak to Professor Martin Steggall, the Pro Vice-Chancellor for Research, started his career as a nurse more than 30 years ago, and still practises today, alongside his role at USW.

Why did you want to train to become a nurse?

When I was 16, I started working in a bank and I absolutely hated it. I had a chat, serendipitously, with my GP. Because I have a lifelong disability, I interfaced with healthcare professionals on a fairly regular basis. I was chatting with my GP about careers, and he said to me, go and do something that you know about. So, I rather flippantly said, well, I know what it's like to be in hospital because I have consumed an awful lot of NHS resources and spent a lot of time in hospital during my childhood, and my brother at the time was also very unwell and I used to get involved with doing some of his clinical care. He said to me, why don't you think about that as a career?

He put me in touch with the local hospital. I took a week of annual leave from the bank, and I did a week's nursing auxiliary experience in the mentally ill unit, and I loved it, much to the frustration of my family, particularly my dad who was a bank manager at the time. I resigned from my position in the bank and I became a nursing auxiliary in an elderly mentally ill unit as they were called in those days. I loved it. I did that for a number of months and thought, this is great, but at the time, I want to do a little bit more, so I did in those days what was called the DC entrance exam for nursing. I did well and then I thought, I'll apply to do my training, and got into St Bartholomew’s School of Nursing and Midwifery, London.

I got the letter confirming I was in on 24 or 25 November 1992, which is about four days after my brother had died of cystic fibrosis. I used to do some clinical care for my brother, and I suppose that in part of my head was the thought the better I get at this, the more I can help him.  Part of the motivation was, I know what it's like to be with my brother, I know what he went through, I know what I've gone through, so based on that, let's give nursing a go.

I initially applied and was accepted to do mental health nursing. I got part way through my training and one of the tutors said, I think you might be better doing adult nursing, so I swapped, and I qualified as an adult nurse in March 1996.

Can you take us through your time as a nurse and the different roles that you’ve had within nursing?

My very first staff nurse job was at St Thomas's in London, on a general medical ward. I then moved into urology, and I quickly realised that what I love is surgical nursing. I'm a surgical nurse through and through, and I absolutely adored my time on the urology ward. It was brilliant, an absolutely fantastic time - a mixture of serious heavy surgery coupled with, long term urological problems needing a surgical intervention, with medical urology, etc.

However, the ward closed as two hospitals merged and that prompted me to go and work in intensive care. I enjoyed it because its fundamental clinical care. It's not about the machines and everything else, it's about doing the fundamentals right. Whilst I was working in intensive care, I finished my Bachelor of Science degree in nursing, as I had qualified as a nurse with a diploma. I was then invited to apply for a urology research nurse post, which I got.

I was working with a consultant urologist Chris Fowler, who is now retired, on a large, multi-centre research project comparing two different surgical treatments. I was then asked to work in outpatients, to see all patients and essentially assess them and then present my assessments to the consultant, and that was really interesting and relatively unusual at the time. Whilst I was doing that, from 1998 to 2001, I also did my master's degree in physiology.

Whilst working with Chris, he became the lead in the Medical School for Medical Education, and he asked me to lead some problem-based learning groups. I started to do that alongside my clinical work. The erectile dysfunction (ED) nurse in urology left, and I was asked to cover. So, I said, why not? I ended up running the erectile dysfunction clinic alongside my teaching activities until I left in December 2014. I did some teaching for City University, London, which was essentially where St Bartholomew’s School of Nursing and Midwifery ended up, when they went into higher education.

I secured an honorary contract with Cwm Taf Morgannwg University Health Board in the Department of Urology in 2015. I do a clinic a week, or a couple of clinics a month, in urology, specifically erectile dysfunction.

Why is it important for you to keep that active nursing going alongside the academia?

There's quite a demand for those clinics, with a long waiting list, and it has quite a profound effect on the individuals and their relationships when there is a sexual dysfunction in whatever shape or form that manifests itself. I want to continue to try and make a difference to people sensitively as much as I can.

What is your favourite thing about being a nurse?

The thing I love most about nursing is that you can kind of make micro differences without being in the spotlight. You try and make a difference to every patient, but you’re anonymous, so you don't have to be in the spotlight. Clearly, the patient knows they're being nursed, but they don't really know who I am. I'm just another nurse.

I think the thing that holds it together for me, and the reason why I keep going back, is that it's still trying to make a difference to the person in front of you, still trying to be compassionate, empathetic, and hopefully making a positive difference in the most dignified way possible.

I like working around in the background, like trying to encourage success in others, and in nursing, it allows me to quietly try and make a difference.

Is there anything that has surprised you about working in the nursing profession?

I had an open mind when I went into nursing, recognising that it didn't necessarily lead to a particular destination.  I remember someone saying that you don't find a career in nursing, the career finds you. And I think nursing is amazing for the incredible breadth of opportunity, the only limits really are your own imagination in some respects. But I also recognise that that is facilitated by other people as well - all our other colleagues in the NHS and other care sectors have enabled that to happen, too.

Nurses are seen as a bit of a homogenous group, and when we talk about nursing people tend to think about ward nursing and it's obviously so much more than that. Obviously, we've got our community colleagues, mental health, learning disability, we've got outreach teams, all sorts of breadth, but it tends to be distilled into what goes on in hospital or on the wards. Sometimes the talents and the skills of my nursing colleagues are not necessarily understood clearly by the public.

I think that caring is such a poorly understood term, and yet if you are on the receiving end of it, you know when you've had good care.

How have you seen the nursing profession change since you first started?

For me, what's changed, particularly in the last ten years at least, is that there has been much more of a teamwork approach. We are absolutely a team, there isn't a hierarchy that is deployed. There clearly is a hierarchy because it's the consultant’s patient, but we are seen as equals in our discussions.

I think nursing has got that respect and recognition from all health colleagues that we have something to offer, and our opinions are important.

And I think from the nursing side, I think my lived experience has been we recognise the talents and experiences from all the other allied health professionals and the medics. We see it as a team approach to a problem to solve and the patient is at the centre of it all. There isn't any ego about it. We're there to try and make the best for our patient, and if a pharmacist has got a better idea or has got the right idea, we'll go to the pharmacist. If it's the physio, we'll go to the physio. My experiences have been much more collaborative and much less hierarchical.

What would you say to a student who wanted to a career in nursing?

Go into it with an open mind. Make sure you've got resilience and make sure you know where you get your energy from. And give yourself permission to realise that it might not be for you. Because I don't think nursing is for everybody. I think it does exact quite an emotional cost and you need to find a way of tapping into your resilience because you need to be able to have good health, physical and mental health, if you're going to look after someone else because they are going to rely on you.