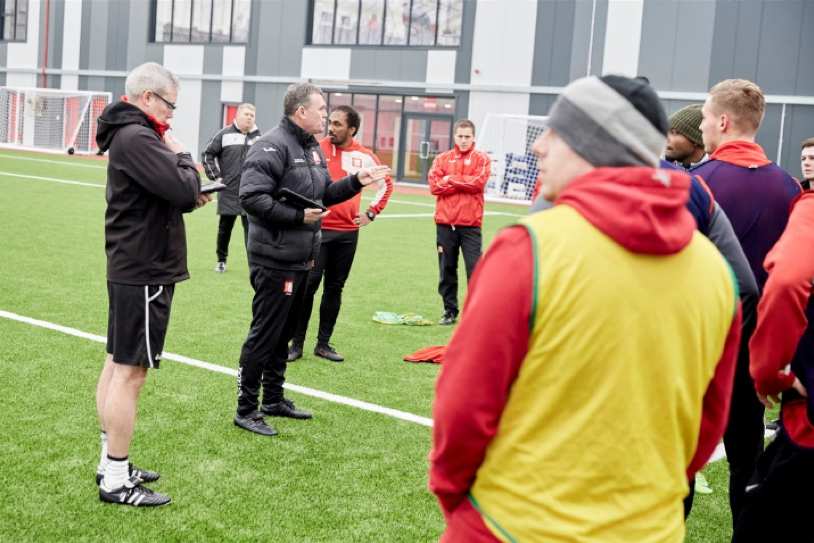 Lee is a Ph.D. student in the School of Health, Sport, and Professional Practice. His research is focused on examining the stress and psychological well-being of elite football coaches. Lee is also the Module Leader for UG Sport Psychology at USW.

The psychological stress experienced by sports coaches has received significant research attention, with it now widely accepted within academic circles as an ever-present part of the everyday role of the coach.

Accompanying this research focus has been an increase in more mainstream media outlets (e.g., television, newspapers, online articles, social media) reporting on the stress experiences of coaches operating at the elite end of sports and the potential implications it has for their performance and their health (e.g., Football, Swimming, American Football). Indeed, a recent article, written by Dan Woike of the Los Angeles Times, placed a spotlight on what has been described as “the NBA’s biggest secret”, focusing on how job stress is ruining the health of the NBA’s best coaches (see Impact of Job Stress of Performance and Health of NBA Coaches). Of particular note in the article was a quote from Doc Rivers, Head Coach of the Los Angeles Clippers, highlighting the impact that job stress had on his health and his ability to carry out his role as an elite coach: 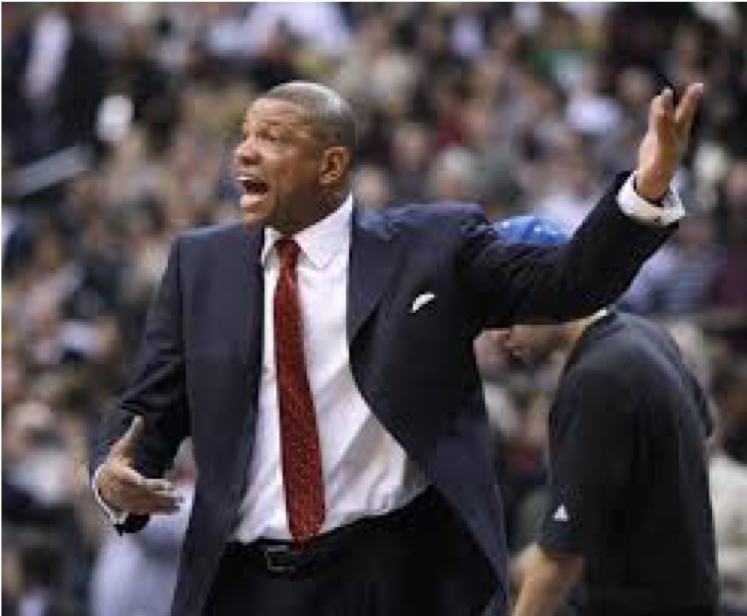 “It was awful … That was a tough stretch. I almost thought about quitting because I had no energy … and I thought it definitely affected my day-to-day ability to coach - and to live. You’re always tired. This job is tiring. And then you’re sick on top of it. I didn’t do any favours for myself.”

Despite the increases in publicity, it is perhaps fair to argue that elite coach stress (and its quite significant personal and professional implications) is often viewed with some scepticism from the general public who appear quick to point out the augmented salaries assumed to be earned by elite coaches and argue that those with such (supposed) lavish lifestyles should not be “stressed”. However, such scepticism and assumption would indicate that the concept of psychological stress is not fully understood, and that the challenges that elite coaches face in (and associated with) their roles are seldom appreciated. Linked to the research that I’m conducting in my PhD, it appears timely, therefore, to take a closer look at what psychological stress is, why coaches experience it, and its potential impact on their role. 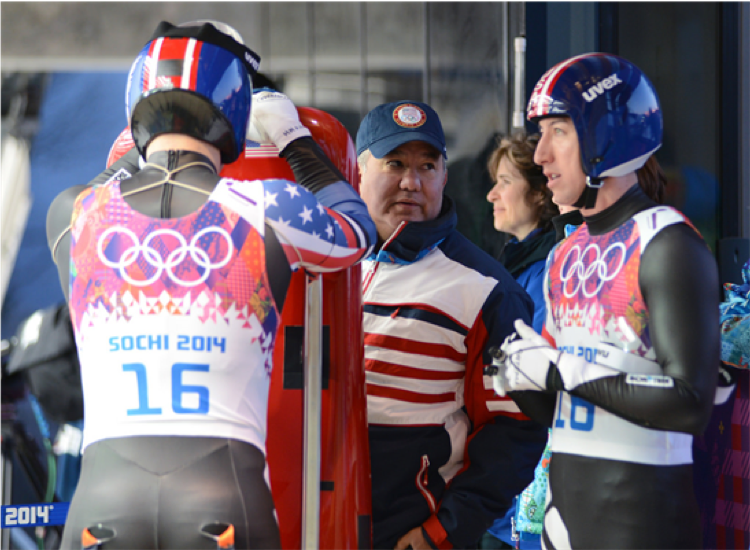 What is psychological stress?

When asking students what “stress” is, it is often thought of as either a ‘stimulus’ (i.e., a situation or event that may cause an individual to negatively respond [emotionally, physically, or behaviourally]), or a ‘response’ (i.e., an individual’s negative response to a situation or event). Such perspectives also mimic how early researchers considered stress. Over the last few decades, however, a general consensus in the literature seems to have been reached on an alternative conceptualisation. Now widely accepted and utilised by researchers is Lazarus and Folkman’s transactional theory of stress, which views stress as a process that involves an individual “transacting” with their environment, making sense of the situations they find themselves in, and attempting to cope with them.

According to this theory, an individual will experience a demand (e.g., in the case of elite coaches – dealing with the media), consider it in relation to their performance and/or well-being (e.g., whether the demand may be potentially harmful or beneficial to them and their performance), and, in relation to whether they have the resources to be able to cope with it, respond to that demand (e.g., emotionally, physically, and behaviourally). The individual then employs some form of coping mechanism (e.g., deep breaths, problem-solving strategy) in an attempt to cope with the demand (as well as their individual responses to the demand) and, depending on the effectiveness of the coping approach, a positive or negative outcome will ensue (for more insight into managing stress in sport, see our book chapter; Understanding and Managing Stress in Sport). 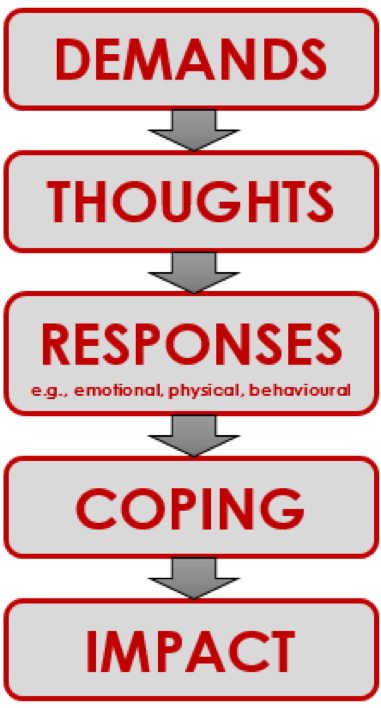 Sports coaches are often viewed as responsible for developing and optimising the performance levels of their athletes/teams. The role of the coach, however, extends far beyond this simplistic perspective and also involves (amongst other things): a range of organisational duties; the management of staff; dealing with the media; developing and managing relationships with stakeholders (e.g., board members, sponsors, supporters, agents, athletes’ families); helping athletes to develop meaningful lives outside of sport; managing budgets; and the management of themselves. In addition, coaches are placed under increasing pressure from their clubs (and National Governing Bodies of sport) and supporters to fulfil these “supplementary” roles effectively whilst being ultimately held accountable for delivering positive results in the arena of play (over which they have little control once the starting whistle is blown).

Achieving such outcomes becomes increasingly difficult when we consider the complexity of managing the dynamic interpersonal relationships associated with many of the aforementioned responsibilities as well as the micro-politics that exist in sports organisations (see Taking Stock of Organisational Psychology in Sport), and the potential pressures that coaches may experience in their lives outside of the coaching environment. Coaches are, therefore, exposed to, and have to contend with, a range of demands associated with their roles (see Table 1 for categorisation of demands). Ineffectively managing and/or coping with such demands may have significant implications for coaches’ practice (e.g., implications for the quality of decision making), well-being (e.g., negative impact on an individual’s ability to function), and their athletes (e.g., placing strain on the coach/athlete relationship). 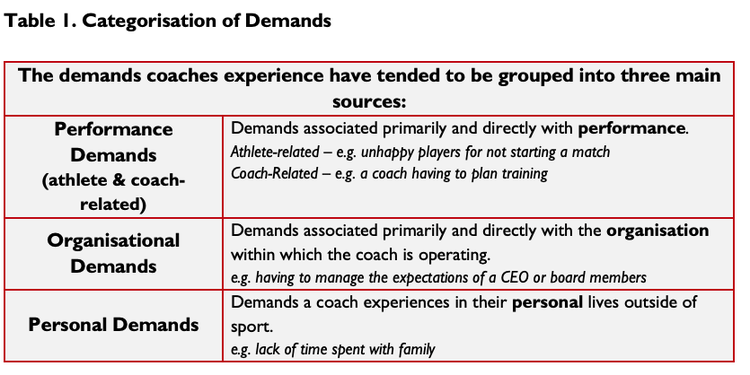 Exploring this phenomenon has been a key part of my PhD research, and in cohesion with the increasing amount of insights being published, has started to shed more light on the concept of the stress process within sports coaching ( for example see our book chapter on this subject -Stress & Well-Being of Those Operating in Groups).

What are the implications of stress for coaches?

Given the pressure and responsibility placed on elite coaches to attain positive performances and results, researchers have explored the potential impact of ineffectively managing the demands they experience on their coaching practice. Elite coaches have reported experiencing a range of negative emotional (e.g., anxiety, anger), physical (e.g., increased heart rate, shaking), and behavioural (e.g., negative body language, increased shouting) responses to stress and suggested that such responses lead mainly to negative coach performance, which can be projected onto their athletes (see Stress and Coping: A Study of World Class Coaches). In support, I have uncovered similar findings in my own research with elite football coaches (see Ph.D. Research Overview). Elite athletes have also supported such findings and reported that they are able to detect when a coach is ineffectively coping with stress via behavioural and verbal cues. Further, that when detecting this they can develop negative perceptions of coach competence and of the quality of coaching they are receiving (see Exploring athletes’ perceptions of coach stress in elite sport environments).

This is clearly not ideal for an elite coach who has to try to and create a coaching environment that develops and nurtures athletes to flourish and reach their sporting potential. In addition to this, as highlighted by Doc Rivers earlier in this piece, ineffectively coping with stress over a prolonged period of time can also have more chronic implications for the health and well-being of coaches (e.g., burnout, development of physical and mental health issues). Consequently, as a field, it is imperative that we do our upmost to support and help coaches (elite and non-elite) develop the strategies and support networks they need to be able to effectively manage the demands they experience in and associated with their roles. 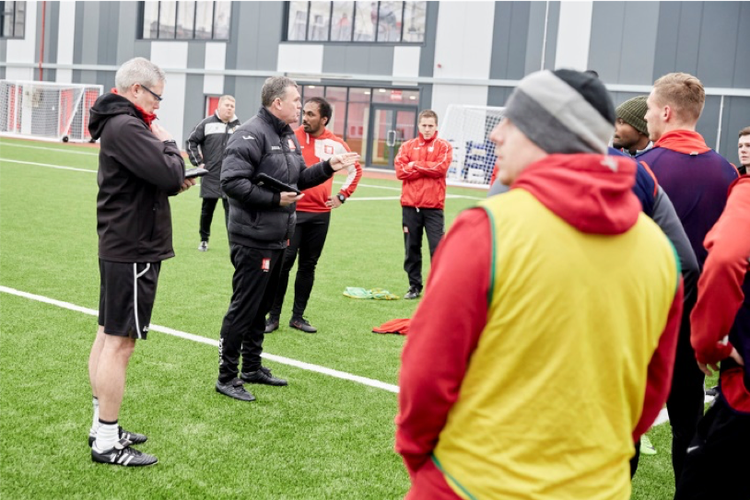 To close, whilst my intention in this blog has been to raise awareness of stress and its impact on the practice and well-being of elite sports coaches, many of the implications of ineffectively managing stress apply across all working contexts and levels.

I therefore have a few questions for the reader to consider:

1) What are the demands you experience in your professional and personal life?

2) What strategies do you use to manage and cope with the demands you experience? Where did you learn those strategies? Would you say they are effective?

3) Do you notice any professional or personal implications when you effectively/ineffectively manage the demands you are experiencing?

4) What can you/your employer/your support network do to better help you manage and cope with the demands you experience?