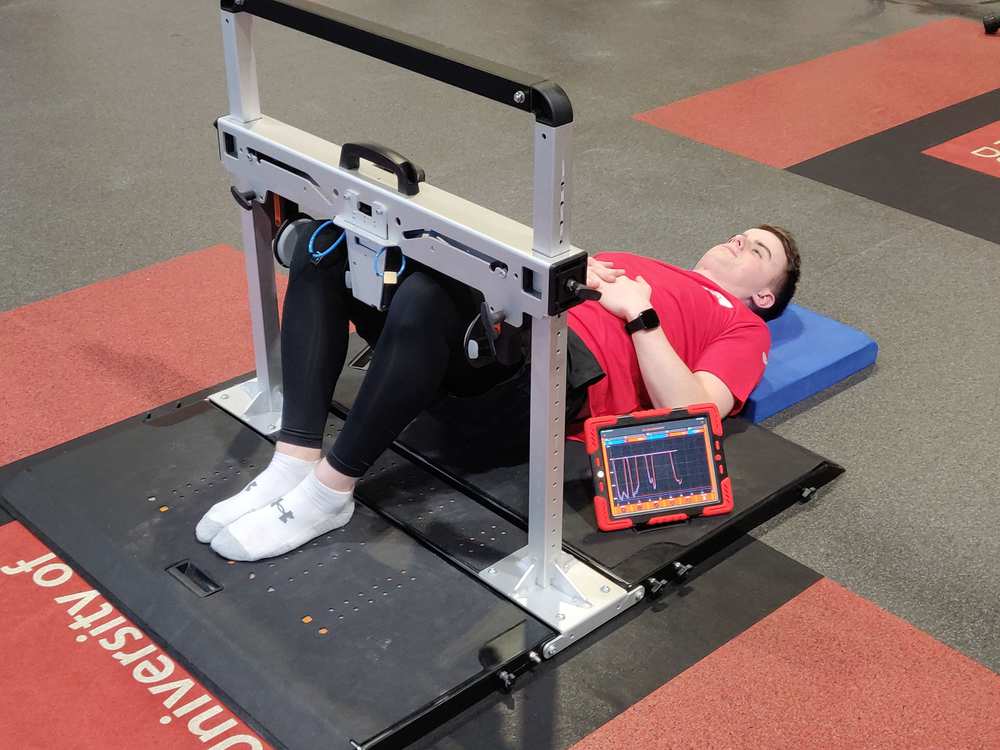 Steven is a PhD student in the School of Health, Sport and Professional Practice.  He is a UKSCA Accredited Strength and Conditioning Coach and is currently based in China, working for Dalian FC as Head of Academy Performance.

Morgan is a Senior Lecturer in Sports Science in the School of Health, Sport and Professional Practice. He is an NSCA Certified Strength and Conditioning Coach, and a member of the Queensland University of Technology Hamstring Injury Group.

No matter the age of a football player, sustaining an injury reduces training/game availability and negatively influences future performance.

Suffering an injury may also have a knock-on effect by increasing the risk of future injuries. These significant consequences of injuries on players’ development and well-being call for a greater understanding of injury incidence, prevalence and severity in youth football to help inform injury reduction programmes (see Injury Incidence in a Premier League Youth Soccer Academy). Unlike senior football, there is not a large body of available research exploring injury type, location, occurrence and its effect on the physical capacities of youth players within academy systems. Consequently, to provide medical and conditioning practitioners with a board spectrum of information specific to youth academy football players, we carried out a systematic review of prospective injury epidemiology studies (see Injury Incidence, Prevalence and Severity in High-Level Male Youth Football). Here, we provide some insights into the findings of this review as well as the implications for youth players engaging in appropriate strength training to both help prevent injury occurrence and reduce the negative effects of experiencing injury for future performance. 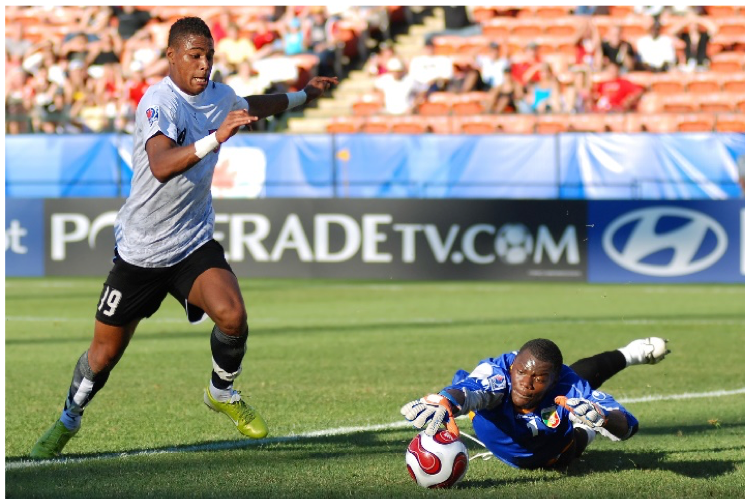 Within the literature that has considered injury occurrence in youth football (up to and including 2019), minimal/slight injuries were reported to range from 7% to 55% of all injuries. Moderate injuries required between 8 to 28 days to fully recover and these injuries ranged from 7% to 67% of total injury occurrence. Conversely, severe injuries varied from between 3% to 32% of all injuries sustained in youth football. The average days lost to injury in youth football ranged from 12.5 days for under 9 to under 16 age groups, to 28.7 days for under 18 to under 21 age groups.

Muscle strain injuries/contractures were reported to range from 15% to 87% of all recorded injuries, whereas ligament injuries accounted for 1% to 21% of injuries sustained in youth football. Further, tendon related injuries ranged from 3% to 13% of all injuries.  Contusions (including tissue bruising) was responsible for 7% to 31% of all injuries that occurred in youth football.  Overuse combined with growth-related injuries and joint injuries accounted for between 1% to 18% and 3% to 32% respectively.  The remaining injuries consisted of fractures (2% to 9%), lacerations (<1% to 3%) and concussions (<1% to 7%). Injuries to lower limbs were most common, ranging from 72% to 93%.  Ankle in combination with foot injuries varied from between 10% to 38% of all injuries, whereas knee injuries made up 8% to 21% of all reported injuries reported in youth football (within the selected sample).  Posterior and anterior thigh injuries were found to account for 4% to 21%, of all recorded injuries. Groin injuries (including adductor/pelvis/hip area) were found to range from 7% to 33% of sustained injuries.  Other injuries consisted of finger/hand/arm/shoulder (<1% to 21%), head and neck/cervical spine (<1% to 14%) and upper body which included sternum/ribs/upper back/mid back (<1% to 9%). 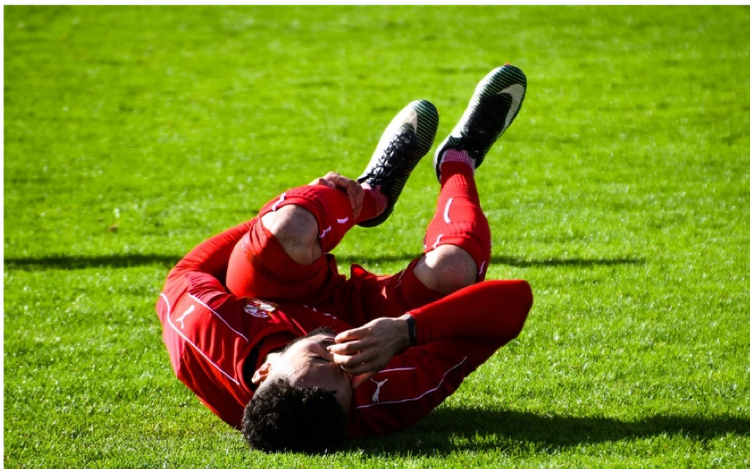 September (end of preparation period) was found to be the prominent month for sustaining an injury, although research has also observed injury spikes during the preparation period (August). The majority of recorded injury spikes have happened in season during the winter (January), while end of the season (March) has also been associated with increased injury occurrence, whilst some of the reviewed data suggested a gradual increase in injuries as the season progressed with a peak at the end of the season in May.

Mechanism of injury and occurrence by playing position

Running, which included very high speed, high speed and jogging accounted for 9 % to 25% of all injuries reported in youth football players. Being tackled by an opponent was responsible for 7% to 26% of injuries, whereas tackling an opponent or being kicked was responsible for 7% to 16% and 5% to 6% of the total injuries recorded respectively.  Situations involving non-contact, such as twisting/turning or landing ranged from 2% to 8% and 3% to 7%. Non-contact injuries accounted for between 53% and 72% of all injuries involving youth players from under 9 to under 21 age groups. Matchplay was responsible for the majority of injuries ranging from 51% to 66%.  However, training was found to account for 34% to 72% of injuries for under 9 to under 21 age groups. Research has also reported that goalkeepers sustain the fewest injuries, ranging from 8% to 14%, followed by attacking players 15% to 22%. Midfielders and defenders incurred the highest number of injuries, accounting for 37% to 41% and 26% to 44%, respectively. 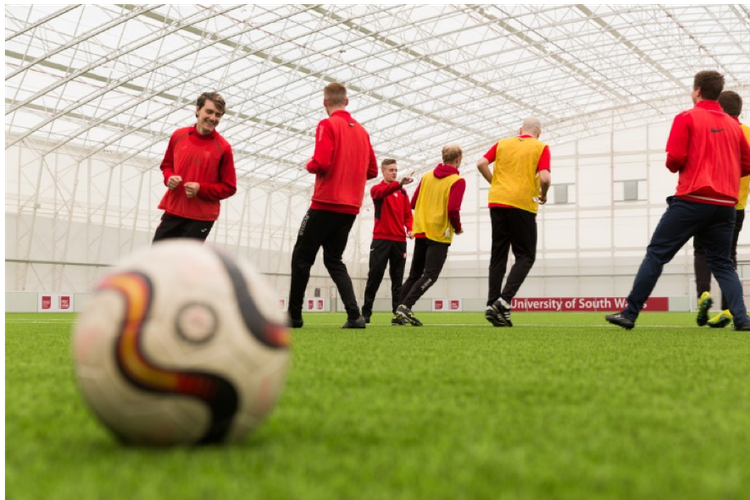 Many similarities exist between youth and senior football injury patterns such as training and competition incidence, prevalence and severity rates. Youth players lose large portions of their seasonal development potential to injury, consequently affecting health and well-being.  A cause for concern emanating from the findings of our research was the large number of muscle and upper leg/groin injuries found in youth football players. As a result, the information gleaned from our work on youth injury has allowed for evidence-based strengthening interventions to limit injury in academy youth football players to be designed.

Obviously, time away from training and competition will reduce a player’s ability to practice and improve football specific skills (i.e. tactics, technique and physicality). Players experiencing injury may also find a reduced capacity for positive training adaptations due to persistent muscle weakness, altered muscle architecture, neuromuscular control and joint instability. Consequently, we conducted additional research to explore how an injury may affect physical development and subsequent performance in youth football players. One hundred and forty-three academy players (aged 9-18) were tested (hamstring strength, NordbordTM and hip strength, ForceFrameTM) once in pre-season and then again at the end of season. We found that sustaining a non-contact lower limb injury did not impact upon the subsequent development of muscle strength to commonly injured locations (groin/upper leg) over the course of a single season in youth players. A novel finding of our work, however, was that high-preseason groin and hamstring strength was negatively associated with a per-unit reduction over the course of a typical youth season. This reduction could have been the result of insufficient exercise stimulus (e.g., intensity or volume) to groin and hamstring regions. Interestingly, the players that lost the most strength were players in the under 16 and under 18 age groups and it was players from these cohorts that suffered the greatest number of injuries across the season under investigation. Further work is therefore warranted to confirm the effect of strength loss on injury in youth football players. 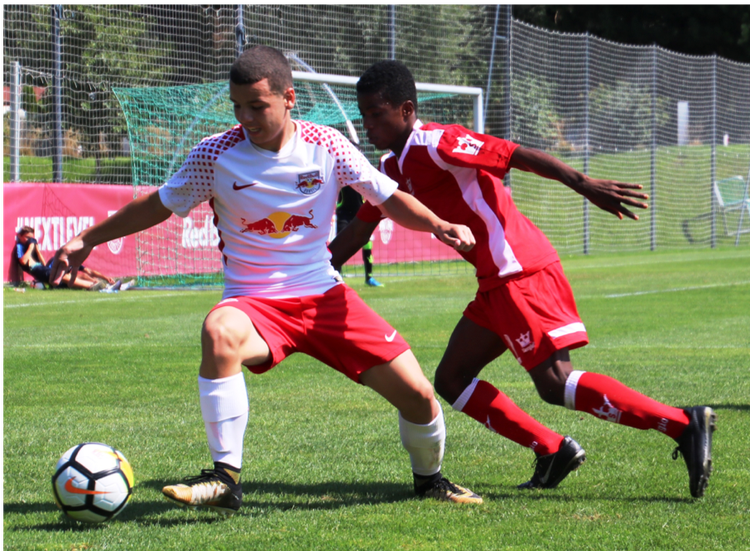 How does this relate to performance?

In youth football, strength tests are used to provide reference points for return to training for players who have incurred an injury and to monitor the effectiveness of strength/rehabilitation training programmes. Some of the most widely used strength assessments related to the rehabilitation process and a players’ return from injury are those centred on commonly injured regions (i.e. groins and hamstrings). Yet, most of the available literature associated with these assessments have used adult athletes, with only limited information on how these measures relate to the performance of key physical tasks, such as straight-line and change of direction speed. Such information can be used by sports medicine/conditioning practitioners to inform rehabilitation/conditioning designs, offering a greater insight on how these (NordbordTM and ForceFrameTM) strength tests relate to performance measures. Therefore, our research extended to explore the relationships between these (groin/hamstring) strength measures and football-specific straight-line speed/change of direction tests within academy football players.

For this work, 146 academy youth players took part in NordbordTM and ForceFrameTM strength tests. All of the players also participated in counter movement jump-impulse, straight line (5m, 10m, and 20m) and change of direction (505) tests, such assessments are regularly used as part of the Elite Player Performance Program (EPPP). Findings indicated that counter-movement jump-impulse featured more in straight-line speed tests. The most likely reason being underpinned by the stretch-shorten cycle and that the movement profile used in countermovement jumps more closely replicates sprinting, compared to the other tests that were used. Similarly, ForceFrameTM strength also featured in straight-line speed, possibly due to the roles of the larger adductor muscles within extending the hip joint during sprinting. Strength derived from the NordbordTM was associated less with straight-line speed and more with change of direction speed. Ground contact times for change of direction are usually longer than those in acceleration and absolute speed phases of sprinting and, therefore, change of direction tests are closely related to maximal strength.  The Nordic Hamstring Exercise, due to its nature is above a 1 repetition maximum and intuitively a test of maximal strength, so it is not surprising that this exercise supports change of direction ability. 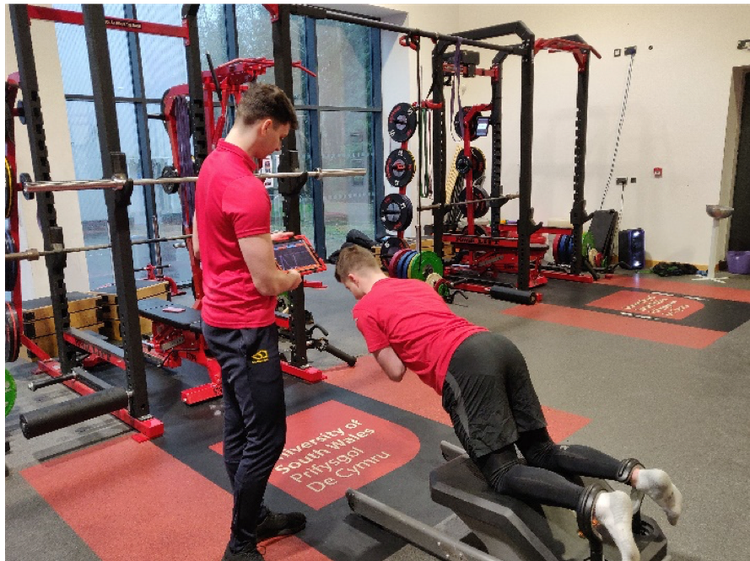 Implications of our research for coaches and support staff

•    It is important for coaches to understand the principles of volume and intensity of training within a youth football context.

•    We have provided clinicians and conditioners with evidence-based data to inform injury reduction protocols specific to youth players. In addition, we have informed rehabilitation/conditioning designs in an effort to maximise positive training adaptations specifically for youth players.

•    Our research demonstrates a need for greater individualisation regarding volume and intensity of hip-based strength training for players presenting with greater preseason strength in an effort to limit seasonal reductions.

•    We have offered greater details on how novel strength tests relate to game and training-based tasks.

•    We have addressed the paucity of research into youth football injury prevalence, severity and incidence and provided reference values for lower limb strength of all cohorts within professional academies.

•    We have presented a periodic update of field-based countermovement jump, straight line and change of direction speed data for all academy age groups.

•    Our research has helped to inform clinicians and conditioners working with youth athletes/players on appropriate scaling of performance-related data.