Returning to education as a parent and a mature student 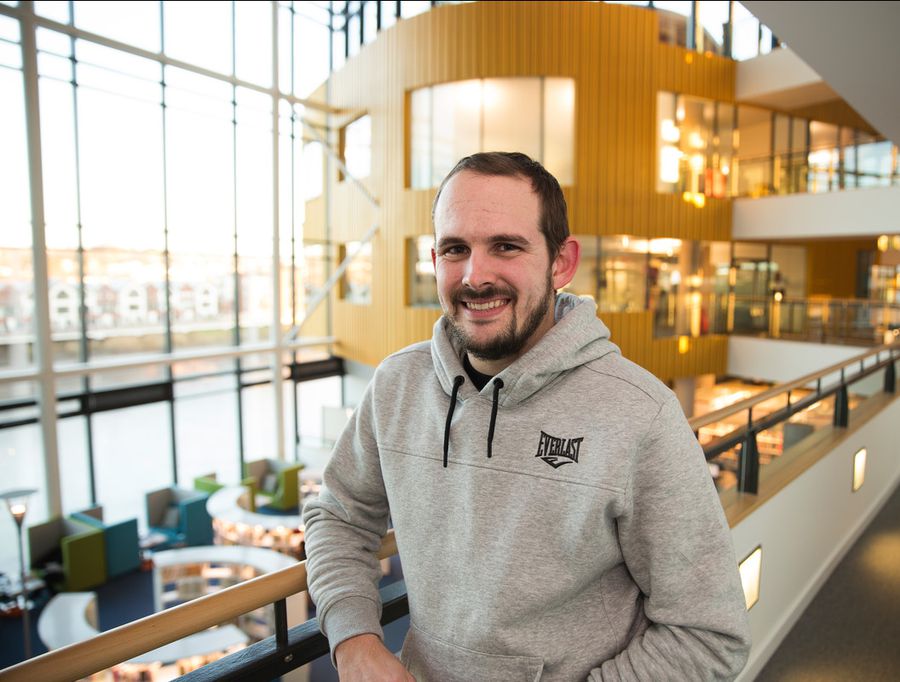 Scott Hann, a thirty-year-old father of two from Cardiff, talks about returning to full-time education to study teaching.

"After 11 years as a retail manager, the decision to give up my career and return to full time education was far from easy.

I’d always harboured dreams of being a teacher, but it’s so easy to find reasons why it isn’t the ‘right’ time: children are too young, I need a full-time wage, I’ve been out of education for too long.

The truth is, sometimes you just have to bite the bullet.

Although teaching was always where I saw my future self, I had assumed I would specialise in one subject area and teach in a Secondary setting. However, a combination of factors led me to Primary teaching: having children, and finding I could engage younger children far better than I realised; understanding that teaching in a Primary school does not mean you have to be a children’s entertainer (I can’t sing); and through my work, understanding that I need variety in my day, so teaching across the whole curriculum is far more appealing.

Whenever you make a big, life changing decision there tends to be a moment of realisation - an epiphany, if you will. Mine came in the summer of 2016 when I realised that I was in a job, not a career.

I had previously enjoyed a two-year spell as a Training Manager, delivering sessions to adults in a classroom environment. I yearned for those days. My job wasn’t looking as safe as it previously had, my potential career was looking less appealing than it previously had, and suddenly the barriers seemed far more surmountable than they previously had. The opportunity presented itself to apply for a place on the BA Primary Studies (with QTS) course, and the rest is history.

In the short term, my goal is to qualify as a teacher, get a job and complete my NQT year. Those might seem like obvious goals, but the challenge for me is to build my CV between now and graduation to make me as employable as possible.

Being a mature student and a parent requires a fine balancing act to be performed 365 days a year. One thing you need in bucket loads is perseverance. Sometimes you feel like you should be doing more, either for your family or for your studies, and often both!

What I’ve learned from my experience so far is that the end goal of becoming a teacher must be firmly in your sights when you’re at a low ebb. I’ve been told so many times “it’ll be worth it in the end” and “think of that day when you’re in your cap and gown”, and that’s what gets me through. It will be worth it, of course. Not just for my future, but for my children and their futures too.

I read a quote once from Oprah Winfrey:

"Do what you have to do, until you can do what you want to do."

That’s always stuck with me.

Ultimately, my goal in education is to move into a leadership role, and eventually to become a Headteacher. However, if I’ve learned one thing throughout my working life, it’s that you should never set your sight firmly on one goal. Life changes, opportunities present themselves unexpectedly and suddenly you find yourself with a new target.

Goals must be fluid.

Life skills have been an asset

In many ways I’m at an advantage over others because I have life skills that I certainly didn’t possess at the age of 18. Some of these skills have really supported me through the course so far. For example, I knew when I started the course I would need to network as quickly and as widely as possible. There’s only so much you can learn from textbooks and lectures, sometimes you just need to go straight to the horse (in a manner of speaking). I’ve engaged massively with Twitter as a way of developing professionally, and the support networks I’ve tapped into will serve me incredibly well for my future in the teaching profession.

I’ve always found that being very organised with my time relieves a lot of stress. For example, if I’m on campus from 9am until 1pm, I could see that as an opportunity to go home and relax before I’m on the school run. But instead, I see that as a two-hour window to get a couple of tasks crossed off my To Do list. I’m very good at organising my workload - after all, when you’re spinning as many plates as parents often do you have to become good at it!

The University is very good at listening to concerns from everybody, and I’ve never felt under pressure to compromise my family life for studying, or vice-versa. I take part in as many extra-curricular activities as I can, but if I can’t make a particular meeting it’s never frowned upon. As long as you show the right attitude to learning, you’ll always have their support through the good times and the tougher times.

I would estimate around 20 per cent of the teaching course is made up of parents. This means there is an automatic support network amongst your peers from the very beginning. In my experience, knowing that others are facing the same difficulties as I am is a great help, as they understand how hard it can be to find time to study around the children, write assignments and work part-time as well. Sometimes it’s just as simple as having someone to vent at!

I’m so excited about the future, and genuinely cannot wait to graduate and start applying for jobs. I’ve learned so much in such a short space of time, and really want to have my own class so I can start implementing my ideas, and deciding how my classroom will look and work. Yes, I know it won’t always be a bed of roses, I’m not blind to the struggles in our education system. But I’m determined, I’m passionate about what I want to do, and being a parent has taught me to expect the unexpected.

It's changed my parenting style

On that point, training to be a teacher has made me reflect considerably on my parenting style. I wouldn’t say I’ve changed how I am as a parent per se, because actually the way I am as a teacher is largely shaped by my parenting style. For instance, ‘the look’ works just as well when students are misbehaving as when my son won’t get in the bath!

But what teaching has made me realise is that you don’t need to be an expert in everything, because it’s the journey of discovery that helps you learn, not simply the fact you were told. To illustrate my point, my son asked me recently why it’s so warm in South America. Now, in the past I’d have probably just told him why it’s so warm in Brazil, compared to Wales. But instead, I gave him my iPad and challenged him find the answer and teach me. 15 minutes later he returned with a handful of websites and a YouTube video which explained perfectly how the solar system works, why we have seasons and why we can’t live on other planets.

So, if teaching has changed me as a parent, it’s only for the better.

To any parents out there considering studying teaching, I’d say this:

If you don’t, you’ll always rue not having tried, and if you do try you’ll wish you’d done it 10 years earlier. It’s tough, it’s a big commitment and there are plenty of reasons why I shouldn’t be in full time education.

But I love it. I absolutely love it. Returning to full-time education was both the bravest and best thing I’ve ever done.

Sometimes you just have to bite the bullet.

You won’t regret it."

Do you want to study Teaching?