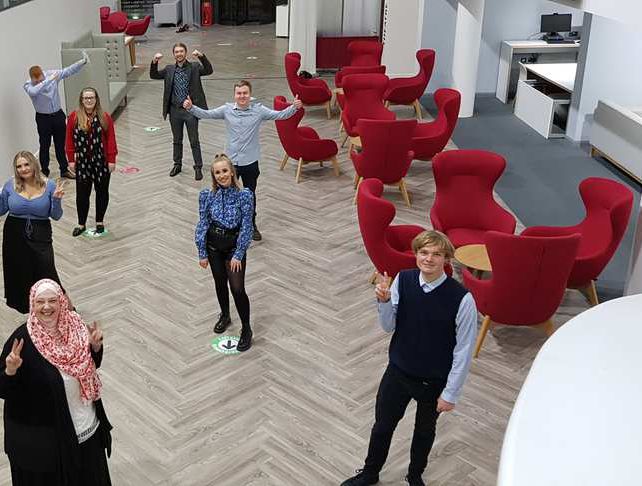 During the awards ceremony, which was this year held online and watched by students at the Cinema at USW’s Cardiff Campus and from their own homes, ‘Zoom Newsday 3’, which was edited, produced and presented by a team of first, second and third year USW BA Journalism students, was named as the winner in the Best Virtual/Online Newsday category. It also won the Steve Harris Award for the stand-out entry of the whole competition.

In the Best Radio Documentary, 2020 graduate Dan Moffat’s show ‘10 Years On: What's Occurring on Barry Island?’ was named runner-up. It looked at how the TV show 'Gavin and Stacey' changed the town of Barry and its seaside resort, and how life there has been transformed by the coronavirus pandemic.

First year journalism student Emily Price, from South Wales, whose story was the main feature on Zoom Newsday 3, said:  "I feel shocked but delighted to win the award, especially the Steve Harris Award for journalism.

“We knew we had a good lead story and we worked really well as a team to pull it together.  It was such a hard time because of Covid and it's fantastic that something good came of it.

"To be involved in the winning of this award has taken my breath away.”

Dan Moffat, who is originally from Northern Ireland and was editor of the Zoom Newsday 3 programme, which went online during the first lockdown and was driven by module leader Beccy Leach along with Journalism course leader Craig Hooper, said: “I'm so proud that the whole of us came together during a really tough time and pulled together a story that was exclusive and caused ructions here in Wales and beyond.

“I think we also covered the story fairly with political analysis. Winning the award proves how strong the course at USW is in giving us the skills we need."

Lecturer Beccy added: "It was so difficult when university ended suddenly because of lockdown. We started the virtual newsdays to bring the student back together - and there were so many important stories to cover. The tech was all new to us and we had to learn fast.

“All credit to Emily who dealt so well with a strong public interest story and to the rest of the team who worked hard to bring the whole bulletin together."

The judges said of USW's work: “Exclusive content, well-explained, with a national impact.”

The BJTC is a non-profit educational charity which brings together the main multimedia broadcast employers in the UK, as well as representatives of accredited training courses, to ensure students receive the highest professional standards of journalism training.