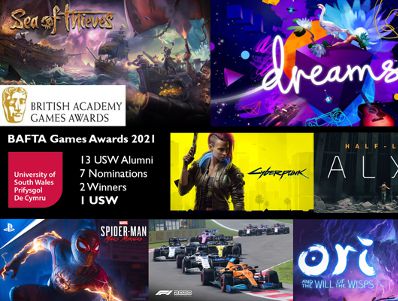 Seven graduates from the University of South Wales (USW) are celebrating BAFTA Games awards for Sea of Thieves and Dreams – two of the most successful video games of the past year.

Sea of Thieves, an action-adventure game developed by Rare Ltd, picked up the BAFTA for Best Evolving Game. The multiplayer game sees the player assume the role of a pirate who completes voyages from different trading companies, in order to become the ultimate pirate legend.

Andrius said: “This award is testament to the incredible talent, imagination and passion that the Rare Ltd team dedicates to its craft. I’m immensely grateful for the opportunity to bring characters to life within Sea of Thieves and grow as an animator.”

Abi added: “I feel so privileged to be part of the Animation team on Sea of Thieves. It’s amazing to see the first game I’ve worked on win a BAFTA.”

David Campbell, who worked on Dreams as an Animator, graduated from USW with a BA (Hons) Computer Animation in 2008, while Catherine Woolley, a Game Designer, graduated from the course in 2009.

Dreams, which won the BAFTA for Technical Achievement, is a game creation system developed by Media Molecule for the PlayStation 4. Players can create user-generated content in the form of fully-fledged games, mechanics, assets, sculptures, music, and art, which can be shared or remixed to be used in others’ creations.

This year, USW graduates clocked up a total of 12 BAFTA Games nominations for some of the most successful games of the year, including Marvel’s Spider-Man: Miles Morales, Ori and the Will of the Wisps, Half-Life: Alyx and CyberPunk 2077.

Corrado Morgana, Academic Subject Manager for Animation and Games at USW, said: “The University are very proud to have worked with, and supported, these fantastic graduates. To see them excel in the industry, working on such visually stunning games, is a brilliant validation of their time at USW and to be recognised at the BAFTA Games awards is a tremendous achievement.”