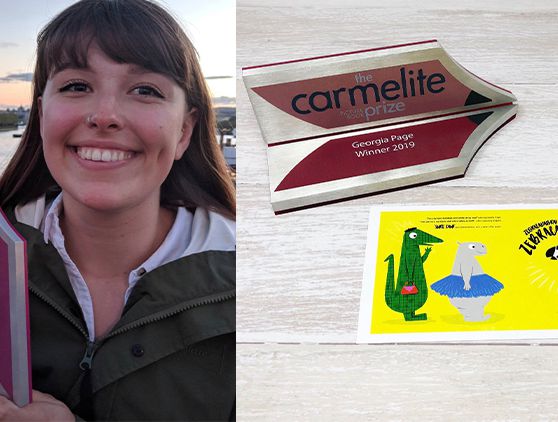 Despite doubting her abilities, and almost not entering the competition, Illustration graduate, Georgia Page secured two book deals and won The Carmelite Prize in her second year; an award that recognises excellence in children's book illustration. Throughout her time at USW, Georgia was supported by her lecturers, course mates and our counselling services which offered her an outlet and allowed her to recognise her talents.

Here, she reflects on her time studying with us:

"In 2017, I began studying Illustration at USW. Initially, quite a laid-back person I approached my future on the course as a time to experiment with materials and see where my work might fit in in the real world – if it was any good, of course.

However, from the get-go, course tutors, Matt, Sarah & Liam treated us all like professionals, regardless of our skill sets. It was a complete change of pace and, I latched on quick. Straight away, I indulged in the weekly projects. Experimenting with various materials to produce visual devices to communicate real-world topics.

Applying my learned knowledge later in the year when we began work with live clients such as the RHS and the BBC. And, as my ever-growing knowledge was put to test, my creative confidence amplified. By the end of first term, I’d successfully tried my hand visually communicating in a broad range of mediums as provided by the university and, at the end of the year, I’d produced my first self-led project, confidently voicing topics that aligned with my creative identity as a young artist, all while solidifying my new-found medium of choice, digital drawing."

"Second year for me, was a big one. In the first term, a combination of sleep-thieving anxiety and long under-processed grief left me hugely distracted from my studies. I expressed my situation to my tutor at the time, Liam, who patiently listened and redirected me to the counselling service at the Atrium, which became a huge emotional relief for me. In the remainder of my first term, with pastoral support at my side from both my counsellor and tutors, I was able to process my feelings in a self-imitated, speculative campaign for The Samarians.

Soon enough, the second term reared its lovely face around the corner and, thankfully after a much needed, month-long break, I was feeling fighting fit, ready to give the remainder of the year my all.

As a class, we had been presented with 2 competition briefs to complete one of – The Penguin Student Award or The Carmelite Prize. And as I was eager to try my hand at character design, I chose Carmelite and began developing my designs for Kes Gray’s text, ‘Zebracadabra’ - A process that was lengthy and challenging but hugely rewarding. Admittedly, it took a bit of encouragement from both Matt and Liam for me to submit my full designs to the competition as I’d convinced myself that it would be a waste of time as I surely wouldn’t get commended, let alone win. But thankfully, I listened.

I submitted my entry and a few months later received my invitation to the awards evening as my entry had been shortlisted. Weeks passed and the day of the awards arrived. I attended the ceremony, anxiously mumbling my way around the room full of industry representatives. The ceremony came and one by one, all other entrants had their names called out, only to have mine listed very last. I’d won. I’d secured not one, but a two-book deal with the team at Hachette Children’s Publishing.  I couldn’t believe how little faith I’d had in myself all along. To have not even considered myself worthy of entering – I realise how extremely fortunate I was to have had such a supportive set of tutors by my side."

"My final year flew by. We were given complete freedom to dive into whichever realms of creativity intrigued us.  I felt extremely confident investigating specific themes in my work, regularly pestering my tutors for their industry knowledge to benefit the progression of my projects. But never did they appear like I ever asked too many questions, always keen to help in whichever way they best could. I used my final major project to fill in the gaps of my portfolio, testing various creative waters and seeking out opportunities for collaboration. All in a great effort to secure a solid professional portfolio I could proudly walk away with.

I owe many thanks for my time at USW. To myself – for the opportunity to find more in life beyond what was only a pad and paper. To my course mates - who exposed me to many unknown genres of creativity. But mostly, to my tutors, Matt, Liam, Sarah and Bett, who provided endless support both, academically and pastorally. I owe you the greatest thanks for your inspiring individual talents, patience and overwhelming encouragement that gently peddled me through some of the toughest and greatest years of my life so far."