A series of public talks that inspire, challenge and enthuse

Tomorrow Matters brings to the University of South Wales leading experts from the spheres of advocacy, business, policymaking and diplomacy to address some of the key global challenges we face and is a cornerstone of our institutional commitment to the United Nations Global Compact.

Previous speakers include the former directors of all the UK’s security agencies, senior diplomats who have represented the UK in Berlin, Brussels, Moscow, Paris and Washington and leading policymakers, including Sir John Major and Julia Gillard. 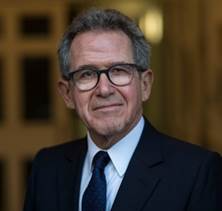 Lord Browne is Chairman of BeyondNetZero, a climate growth equity venture established in partnership with General Atlantic. He served as Group Chief Executive of international energy company BP from 1995 to 2007, having joined the company in 1966 as a university apprentice. He led BP through a period of significant growth and transformation, including a merger with Amoco in 1998. His landmark speech at Stanford University in 1997 established BP as a global leader in the way it thought about and sought to address climate change. In 2007, Lord Browne joined Riverstone, where he was co-head of the world’s largest renewable energy private equity fund until 2015. He is Chairman of Windward, a global maritime predictive intelligence company and Chairman of SparkCognition, and artificial intelligence technology company.