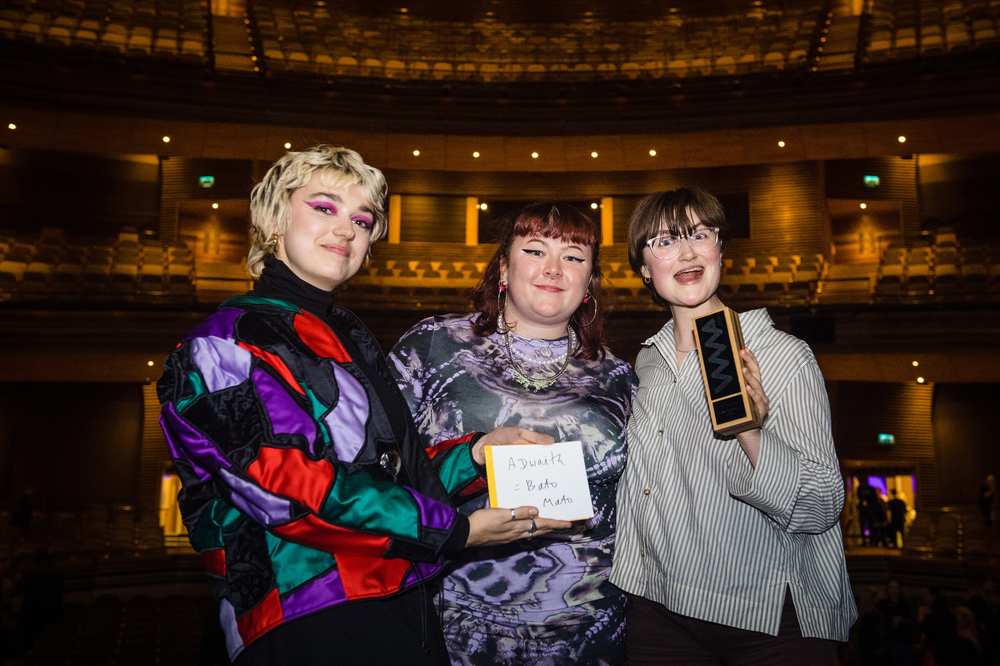 University of South Wales graduate Hollie Singer has made history with her Welsh language indie rock band, Adwaith, by winning the Welsh Music Prize for a second time.

Four years after their debut album release, the Carmarthen band has returned with their much-anticipated record which took its name from their trusty guide while aboard the Trans-Siberian Express. Listen to Bato Mato here.

Hollie, who graduated from BA Popular and Commercial Music in 2020, formed Adwaith in 2015 with Gwenllian Anthony and Heledd Owen. The band first won the Welsh Music Prize in 2019, while Hollie was in her second year of study. She said: “We’re absolutely ecstatic. We were not expecting it whatsoever! To win a second time – and the first people to have won it twice, is just amazing and we’re very grateful.”

USW has enjoyed an industry partnership with Libertino Records since 2021, offering Music students access to masterclasses, bespoke business briefs and a graduate award for excellence.

Gruff Owen, CEO of Libertino Records, said: “We are so proud of Adwaith and what they have achieved with Bato Mato. What an exhilarating creative journey it has been from Siberia and back to Wales for the band. They created history last night with an album that has been embraced internationally and ignited people’s imaginations.”

Dr Damon Minchella, Music Lecturer at USW and former Ocean Colour Scene bassist, added: “We are beyond thrilled for Hollie and Adwaith for this incredible achievement, re-writing the history books for Welsh music. This prize is a worthy testament to this exciting, hardworking band who have grown so much in the past few years. Congratulations!”

"They have won the WMP for the second time and are the first band to do this. The judges debated and were blown away by the quality of all 15 albums. They felt Bato Mato by Adwaith deserves this title. We are thrilled for the band, who continue to make excellent music and find new fans constantly.”

Welsh Music Prize judge Matt Wilkinson, of Apple Music, added: “With their undeniable sense of purpose, vision and growth, Adwaith had us all agreeing that Bato Mato is an album that demands and deserves recognition.”

Supported by Creative Wales, Welsh Music Prize is an annual award celebrating the best new music created in Wales, by musicians from Wales. Previous editions have seen albums by Gruff Rhys, Gwenno and Boy Azooga win, and last year’s award was given to Inner Song by Kelly Lee Owens, from Flintshire.

Speaking of Creative Wales’ support for the Welsh Music Prize, Deputy Minister for Arts and Sport, Dawn Bowden MS, said: “Creative Wales is proud to support the Welsh Music Prize again this year. It’s a fantastic opportunity to showcase the diversity of genres and artists making such exciting music in Wales today. The Welsh Music Prize is a celebration and recognition of excellence and creativity in Welsh Music – and I’d like to congratulate Adwaith on being named as the winner and I’m confident that the prize fund will contribute to their future success.”

The 12th annual awards ceremony was held for the first time in front of a live public audience, as part of Llais, Cardiff’s flagship international arts festival. The evening saw performances from shortlisted artists including Buzzard Buzzard Buzzard – fronted by another USW alumni, Tom Rees –  and acted as the opening event for Llais, which returns to Cardiff from 26-30 October with an eclectic line-up of international acts.

Find out more about Music and Sound courses at USW