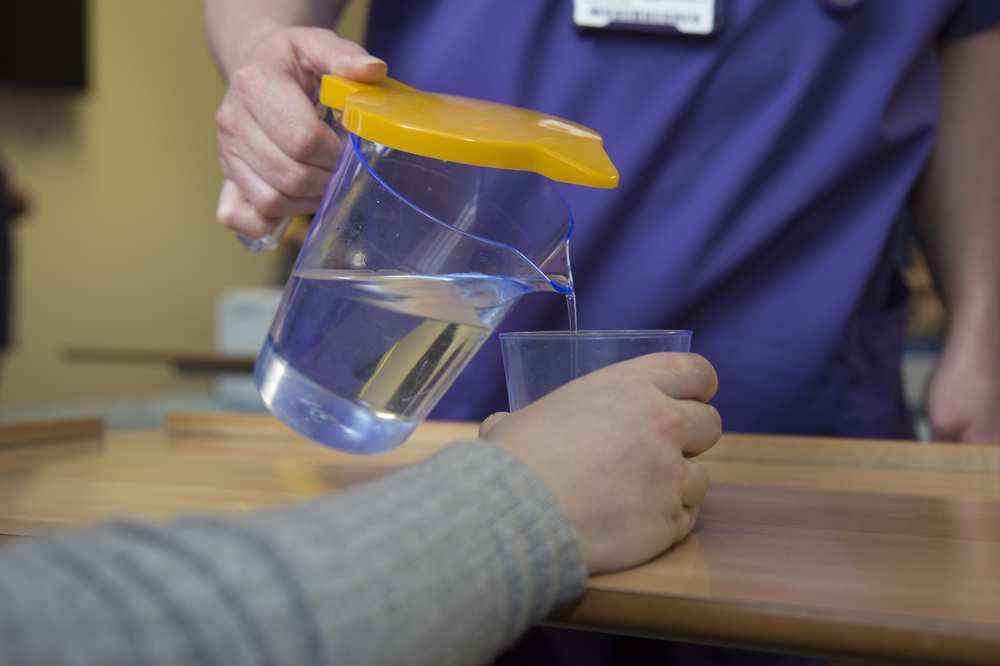 A group of adult nursing students at the University of South Wales (USW) have come up with a simple idea that could help hospital staff monitor a patient’s fluid intake.

They are proposing that hospitals could look at introducing jugs with yellow lids, rather than the traditional blue lids, for patients who are either having their fluids restricted or monitored.

One of the third year student nurses, who will graduating next March, Donna Walker, said: “A few of our group have worked as health care support workers and although nursing staff make every effort to ensure patients are getting the correct fluids, we all agreed that it can be quite difficult to know which patients are having their fluids monitored on a ward.

“Some patients, for example, may be on fluid restrictions following complications such as heart failure, whilst others might be being encouraged to drink more because they are dehydrated.

“Our idea was to introduce an easy visual cue, which can easily show a nurse or a health care support worker on a busy ward, which patients they should be monitoring for fluids.

“We chose yellow as it is considered a colour that is positive for people living with dementia as well as people with impaired vision.

“The lids, which can cost as little as 70p each, could also be much cheaper than the cost of treating urinary tract infections or catheterisation, which it has been estimated costs the NHS £500m a year.

“Before we spoke to anyone about our idea, we ran a Twitter poll with student nurses, current nurses and health care practitioners to ask how many people easily knew which patients were having their fluids monitored on their wards. 76% said that they didn’t, unless it had been written in the handover sheets.”

After sharing their ideas via social media, the Cwm Taf University Health Board approached the six third-year students - Donna Walker, Charlotte Phillips, Cerys Davies, Rachel Lloyd-Jones, Cellan Howells and Tamara Konten - and invited them in to talk through their idea in more detail.

As a result, they are now trialling the use of yellow lids on water jugs, on a surgical ward at the Royal Glamorgan hospital in Llantrisant, South Wales.

Clare Barker, Deputy Ward Manager at the Royal Glamorgan Hospital, said: “This is an innovative idea – the use of yellow lids will be clearly identifiable to everyone, including patients, relatives and staff.”

Student nurse Charlotte Phillips, added: “We are really pleased that the lids are being trialled at the Royal Glamorgan Hospital. We plan to raise awareness of the lids with the family and visitors of the patients as well as the staff, so when they visit they are encouraged to offer their relative a drink or understand that their fluids are being restricted.

“We can’t believe the reaction that we’ve had to our idea so far. We’ve had nurses, health care and medical practitioners contacting us from across the UK, and even Australia to say that they love this simple idea. And we’ve had a message from a ward at the Tameside and Glossop Hospital in England to say they have ordered yellow lids already to take part in this idea.”

A post about the idea on the group’s Facebook page has been shared more than 2000 times and has been seen by almost 150,000 people.