Concussion on the rugby pitch can lead to accelerated ageing, research finds 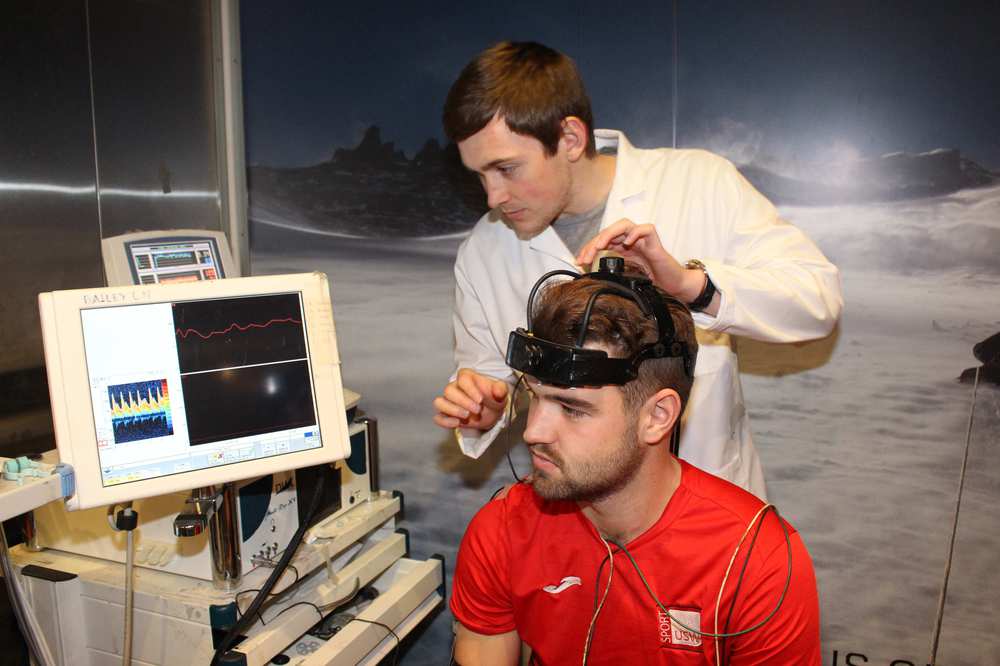 Suffering repeated concussions while playing rugby can lead to accelerated cognitive decline and increase the risk of developing neurodegenerative disease such as Alzheimer’s and Parkinson’s, according to research at the University of South Wales.

Working closely with Cardiff Blues players, PhD student Tom Owens (pictured above) and Professor Damian Bailey led a study into the effects that sport-related concussion can have on a person’s brain function and cognitive ability, extending prior research.

Alongside the study on current players, the research team at USW’s Neurovascular Research Laboratory worked with a group of retired rugby players aged between 60 and 80, investigating the consequences of concussion on brain health across the adult lifespan, to see if impact was a potential cause of ‘accelerated ageing’. Both research studies were supported by funding from the JPR Williams Research Fellowships and Royal Society (Prof Bailey is a Royal Society Wolfson Fellow).

As part of a thorough health check, players received cardiac screening using an ECG, as well as a fitness assessment, a blood sample to test for signs of changes to brain health, an assessment of blood vessel function, observations of cerebrovascular function (blood flow to the brain) and a clinical assessment of cognitive function (mental agility).

The aim of the research was to study the impact of recurrent concussion across the lifespan of rugby union players – a sport which has been criticised for its management of concussion.

Tom said: “Sport-related concussion affects millions of people around the world, and poses a significant health concern, yet remains one of the least understood injuries facing the sports medicine community.

“We suspected that rugby players would show signs of reduced brain function, and that these impairments would be most apparent in the retired players. Evidence suggests that recurrent concussion may contribute to long-term neurologic disorders in later life – for example, retired contact sport athletes with three or more concussions are five times more likely to suffer mild cognitive impairment (MCI), which is known to increase the risk of developing neurodegenerative diseases including Alzheimer’s and dementia.”

For both studies, rugby players past and present were compared to a control group which were matched for demographics including age and cardiorespiratory fitness (the latter protects the brain) – with the main difference being, the control group had never played professional rugby or sustained any concussions before.

The research, which included 90 participants, revealed that the concussions suffered by both groups had generated impairments to cognitive function, with the retired players showing signs of MCI.

Tom identified that rugby players who have suffered several concussions are characterised by changes to metabolites in their blood, which affects blood flow and oxygen delivery to the brain, therefore causing reduced cognitive function.

As part of the study, Tom worked closely with Dr Gareth Jones, former lead sports physician for the Cardiff Blues who continues to practice as a sports physician, to conduct assessments on the participants before, during and after exercise and note any changes in their ECG results.

Dr Jones’ role was to monitor the players during exercise whilst the research project studied the effects of exercise on cerebral flow (blood flow to the brain), lending his experience as a specialty doctor in the field of cardiology to review the ECG tests, alongside Professor Bruce Davies, USW Emeritus Professor in cardiovascular physiology.

He said: “My role as a clinician was to make an assessment on the risk and safety of exercise in players past and present, and we had the full support of all of the participants.

“With an issue as important as concussion, it’s vital that the link between the two disciplines of sports science and sports medicine is as close as possible.”

Tom added: “The findings among the 90 participants that took part in the research may apply to millions of people across the globe who have sustained a concussion in their lifetime, and may offer a mechanism for the development of several neurodegenerative diseases.”

The findings of these studies have been presented at international conferences, and will soon be submitted to prestigious scientific journals such as the Journal of Physiology and Journal of Cerebral Blood Flow and Metabolism for publication.

Dan Jones, Cardiff Blues’ Head of Medical Services, said: “As a medical team we are proud to have supported this project, with concussion being such an important area of research. Supporting Tom and his work at University of South Wales means the Cardiff Blues players and medical staff are contributing positively at the cutting edge of Sports Medicine.”