As long as you’ve got the right people behind you, you can do anything you want 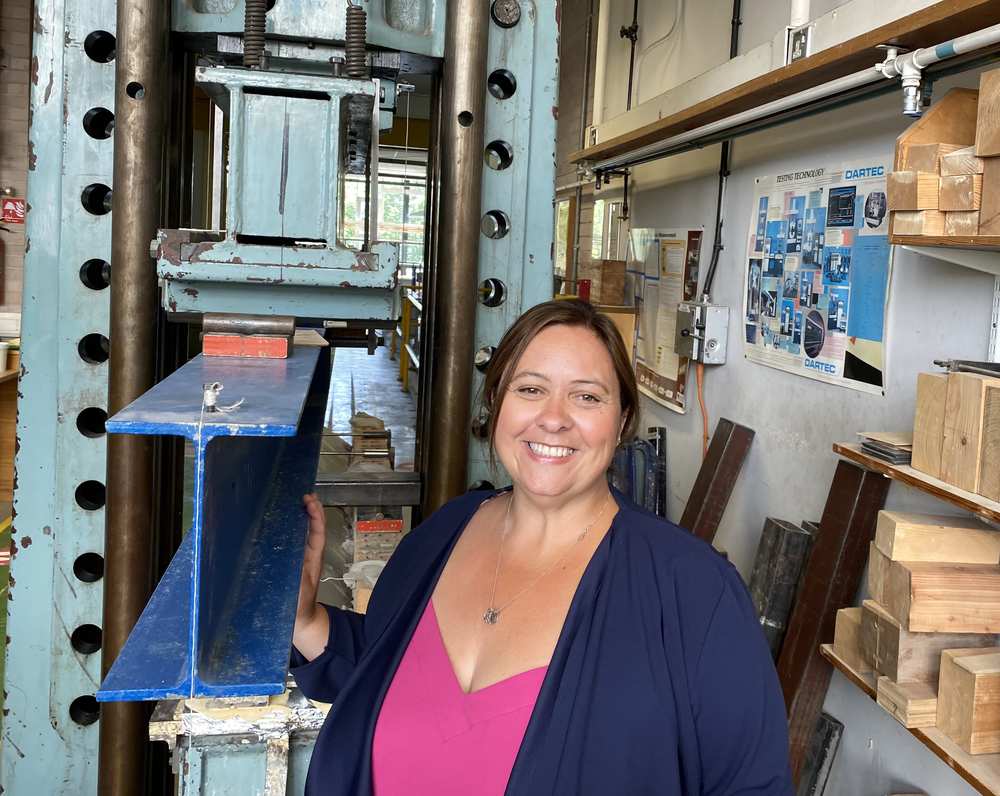 On International Women in Engineering Day, Joanne Thomas, lecturer In Civil Engineering, explains why she became an engineer and, despite having a successful career and now educating the next generation, how she deals with ‘imposter syndrome’.

How did you decide you wanted to be an engineer?

I’m the youngest daughter of a family of miners from Neath, and the first to go to university. I have always been fascinated by things that are involved in engineering, how do things stand up, and loved drawing and maths. When I was very young I often used to sit with my grandad and count coins, and he’d help me with maths because he knew how much I enjoyed it.

After doing my GCSEs I had an idea that I wanted to be an architect, because I really enjoyed sketching, and used to look at buildings and wonder ‘how was that made, how was that built, how is it standing?’.

When I went to Swansea College to do my A-levels, I already knew I had a flair for physics, and really enjoyed maths, but wanted to do something a bit ‘lighter’. I enjoyed drawing, so decided to do graphic communications, such as tech drawing, and learning communications skills through drawing.

This actually helped guide me towards engineering, because I discovered I didn’t really have the best creativity. That was all part of the learning curve.  Sketching is a fantastic tool I still use today to explain ideas and concepts.

However, while at Swansea College my maths lecturer introduced me to engineering, and on an engineering taster day at Salford University I went to a water treatment plant and I saw it being built. I realised that I loved it, seeing things being built, and actually working on site.

It all really started there and I decided I wanted to be a civil engineer, and went on to do a Masters degree (M.Eng) in architectural engineering at Cardiff University.

A year of that involved a work placement, where I was very lucky to work on some great projects, including designing a staircase for a palace.

How did your education influence your career?

Doing the masters degree was the start of my career and was a great experience, while the time on placement made it even better.

It was great that I was actually working things out on paper, and then going to site and seeing them being built, and the finally seeing the final project.

This proved it was for me – this is what I love, doing the number-crunching, doing the analysis, going from my head to paper, from paper to a drawing, the drawing to a contractor, from the contractor to building it and seeing the final article, and saying ‘I did that’.

I’m also lucky that I’ve been involved in a variety of projects during my career, including industrial, healthcare, schools, utilities, commercial buildings, art centres and car parks, even bases for lampposts. They’ve been very mixed, and have ranged from very small to million-pound structures, some that nobody will probably ever see.  I’ve been very lucky to work for small and international consultancies.  Most of my career was spent working with a great team at James and Nicholas LLP, who nurtured my skills in designing with various different materials.

One of the best parts for me is that you work with architects and other disciplines to come up with the structural solutions to bring their designs to life – great individuals working together to make things that last a long time.

While working I also became Chartered with the Institution of Structural Engineers (IStructE), which is an extremely challenging qualification to achieve. The pass rate in the year I took it was 23%, so it really is a prestigious accolade.

Why did you decide to move from industry into teaching?

I am a STEM ambassador and when students came into work at the companies I was working for, I would always take them under my wing and make sure they were looked after. My colleagues said I was good at explaining things and putting them in layman’s terms, and, although I always wanted to be an engineer, I also fancied trying my hand at teaching, so when I saw the job at USW I decided to give it a go.

This happened at a time that I lost a friend to cancer and that made me re-evaluate my career and, when I saw the role advertised, I thought ‘Why don’t I do it, and do it now?’

So, from March 2019, I took a different direction and now teach structural engineering in my role as a civil engineering lecturer.

What has been your experience as a woman in engineering, and what advice would you give to women thinking of a career in engineering?

I never had a problem with being a woman in the engineering industry. That is because of the team that I worked in at all of my employers. I was considered as the right person to do the right job.

It wasn’t about being a woman or being a man, it was that my head worked logically.

Women engineers may be small in number, but we are there. As long as you’ve got the right people behind you, you can do anything you want.

Women are very logical, they bring passion, and compassion, to a job, and think about the bigger picture.

So, if you want to help the world, particularly now with this massive climate emergency that we’re in, being an engineer and making a better society by the things that we need every day, like the structures we build, the transport, the water and power we deliver, as well as lots of things that you  might never have thought of. Engineers impact everybody’s lives, every day, even if they don’t realise it.

And you can talk to the men, they’re not that scary! You have to go with an open mind, you have to accept that all people are different, and embrace that difference.

You suffer with ‘imposter syndrome’ even though you’re a successful engineer who now teaches other aspiring engineers. How do you beat that feeling?

My team help me a lot. They remind me that I’m worth it, that I’m good at what I do, and that I should have more confidence in myself.

I went to a women in engineering day in Bristol a few years ago that was being addressed by a female past president of the Institution of Structural Engineers (IStuctE), who talked about the fact that she also suffered from imposter syndrome, and it seems to me that quite a lot of female engineers do have it to a different extent.

I don’t think my imposter syndrome will ever go away, that’s just who I am, but my great team behind me, reminding me that I can do my job, gets me through the day.

What is also great is that I get great feedback from my students. That helps me realise that I must be doing something right.